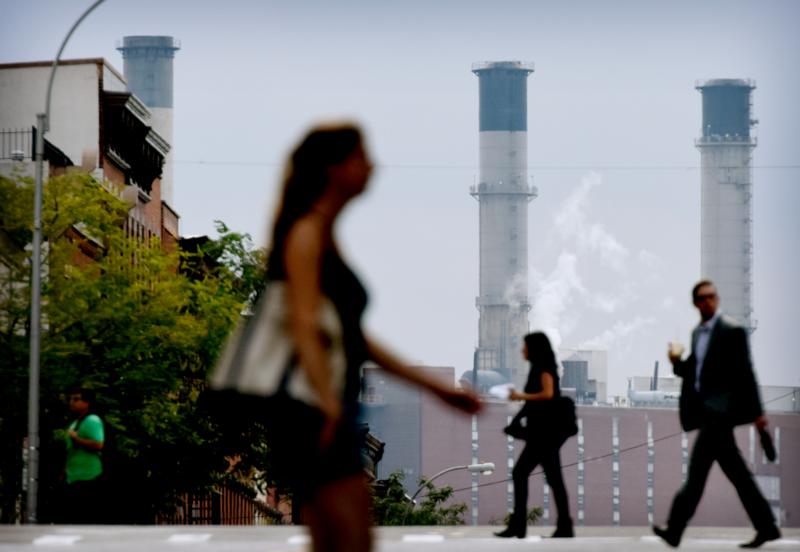 The East River Generating Station in New York City is seen in this Aug. 11, 2015, file photo. The U.S. has deposited $500 million of the $3 billion it pledged to the United Nations' Green Climate Fund during the December Paris climate talks. (CNS photo/Justin Lane, EPA)

WASHINGTON (CNS) — Faith-based organizations welcomed the recent announcement that the United States made its first $500 million contribution under a four-year, $3 billion pledge to support the Green Climate Fund that is helping developing countries respond to climate change.

“It’s important that the U.S. really come through with their commitment to the Green Climate Fund and demonstrate leadership on climate change. It’s also important for the realities of climate change for the most vulnerable around the world,” said Chloe Schwabe, director of the faith-economy-ecology program for the Maryknoll Office for Global Concerns.

Eric Garduno, senior policy and legislative specialist for Catholic Relief Services, said the agency was pleased that the first U.S. contribution was made. CRS is the U.S. bishops’ overseas relief and development agency.

“We thought it was pretty important actually with the Paris climate talks concluding in December,” Garduno said. “These funds for the Green Climate Fund were a key component of the overall agreement.”

The fund gained wide support during the climate meeting in December in Paris. While the most advanced countries have committed to provide $100 billion annually for mitigation and adaptation programs within a decade, countries thus far have contributed a bit more than $10 billion to the fund.

The fund is allocating about half of its money for mitigation efforts and half to help communities adapt to the changing climate.

Garduno noted the work of CRS in helping coffee growers in Central America who are turning to cacao because rising temperatures in the mountains are adversely affecting coffee production. Farmers also are supported in the planting of cover crops, which preserve moisture, purify water and replace nutrients in soils.

“CRS, being an implementing agency of foreign assistance, mostly through (the U.S. Agency for International Development), we’re working with some of the poorest communities, we actually see firsthand the effect climate change has had on those communities,” Garduno said.

“CRS has been doing this sort of work for some time now and we see the need for additional investments for this type of work,” he added.

CRS, the U.S. Conference of Catholic Bishops and Catholic Charities USA called upon members of Congress to support U.S. funding of the Green Climate Fund in an Oct. 28 letter. Citing the words of Pope Francis and St. John Paul II, the influential Catholic organizations said the U.S. has a moral commitment to support the fund and further work to reduce greenhouse gas emissions, which scientists have identified as the primary cause of climate change.

Republican members of Congress immediately questioned the $500 million allocation, saying that it had not been specifically approved. In earlier budget proposals, members of the House of Representatives had included language to prohibit the U.S. from contributing to the U.N.-sponsored fund.

However, at the White House’s insistence, language prohibiting the expenditure was stripped from the bill in December as congressional leaders and the administration finalized a budget deal for fiscal year 2016 to prevent a contentious government shutdown.

The advocates said they plan to continue urging Congress and the White House to maintain the U.S. commitment to the fund.

Maryknoll Office for Global Concerns and CRS are among 80 organizations in a broad interfaith coalition that called upon Congress and the White House to support the fund. Other organizations in the effort included Catholic Climate Covenant, American Jewish World Service, Evangelical Lutheran Church in America, Interfaith Power and Light, Sisters of Mercy of the Americas’ Institute Justice Team and Medical Mission Sisters Alliance for Justice.

NEXT: Stations of the Cross for deaf help them follow story of Jesus’ passion