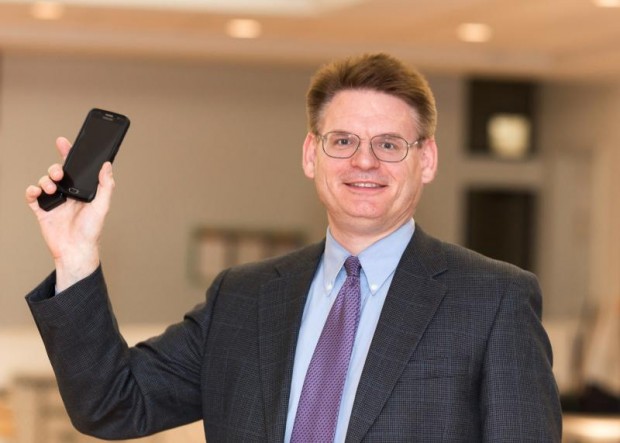 Clinical and family therapist Peter Kleponis of the Philadelphia area poses for a photograph with his cellphone during his workshop on Internet pornography and addictions March 7 at St. Gregory the Great Parish in Ft. Lauderdale, Fla. (CNS photo/Tom Tracy)

FORT LAUDERDALE, Fla. (CNS) — Parents who don’t supervise their children’s online activity and mobile device usage might as well be dropping off their kids at an adult bookstore filled with dangerous strangers.

That was the gist of a frank and wide-ranging conversation on Internet pornography and addiction that licensed clinical therapist and family therapist Peter Kleponis led for some 70 parents and young adult men and teens March 7 in the Miami Archdiocese.

The group gathered at St. Gregory the Great Church in Fort Lauderdale.

He is certified in the diagnosis and treatment of sexual addictions by the American Association of Christian Counselors’ Light University and Freedom Begins Here program founded by Mark Laaser, who has a doctorate in religion and psychology.

Research shows that age 8 is now the average age at which youngsters first encounter online pornography, according to Kleponis. Parents with young children and teens at home need to install parental filtering controls on youngsters’ cellphones and Internet services at home.

“Even with that, if your child is on the Internet and using any technology a parent needs to be standing behind them watching everything they are doing,” Kleponis said, adding that parents need to be aware that gaming systems with online connections and even public libraries and public access devices have also been widely used for viewing pornography without parental awareness.

“Up to the age of 11, we need to protect kids and they don’t even need to know this stuff exists, and for children 11 years and older we need to educate them about the dangers of pornography so they can reject it and say ‘No’ to it,” he said.

“I also don’t believe young children need to have smartphones, get them ‘flip phones’ or the ‘Cricket’ brand phone which is only used to call Mom and Dad.”

Kleponis’ presentation was in the context of widespread sexual addictions and research that shows pervasive pornography use even among religious-affiliated people including Christians. Before meeting with the lay group of men and teens, Kleponis first led a four-hour session for local priests and deacons who report that they increasingly address the spiritual dimensions of parishioners dealing with pornography issues.

— Every 39 minutes, a new pornographic video is being produced in the United States, and increasingly they are videos made by amateurs.

— The pornography industry earns over $97 billion worldwide every year; $13 billion comes from the United States.

— There are 4.2 million pornographic websites.

— The percentages of male/female visitors to pornographic websites: 71 percent are male and 28 percent are female, with a steadily growing ratio of young female viewers.

“For teens, again we limit the screen time, and I suggest no more than two to three hours a day including school work online, and monitor all social media. And you never allow a teenager to isolate with the internet,” Kleponis said.

“The (Internet) access has to be done on the kitchen table where everybody can see that, and we need an online accountability service for computers, tablets and cellphones,” he added.

He advises parents to remind youngsters that they are simply trying to protect children from sexual predators and profit-seeking pornography merchants and that they have a right to supervise all communications devices and social media usage.

Increasingly, he added, there is a growing amount of homemade or amateur-produced pornography, adding yet another layer of worry and complexity for parents and educators.

NEXT: Catholics urged to sign petition calling for U.S. declaration of genocide