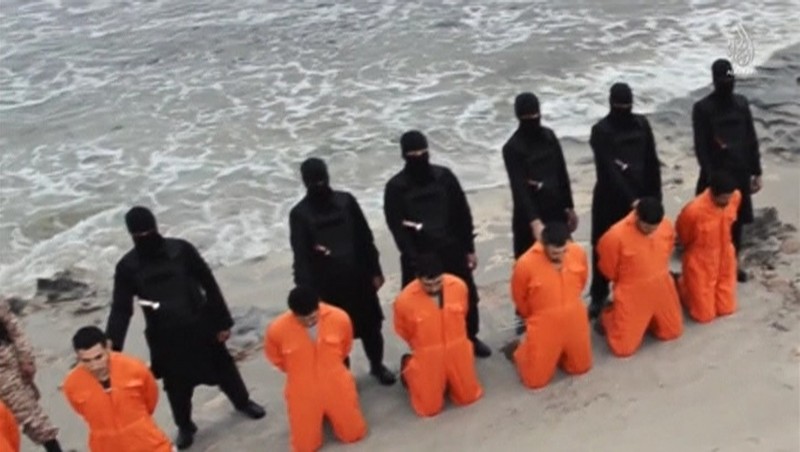 WASHINGTON (CNS) — The Knights of Columbus and In Defense of Christians contend that Christians in Libya, Iraq and Syria are victims of genocide carried out by the Islamic State in a new report.

The 278-page document was released March 10 in Washington, a week before a congressionally mandated deadline for the Department of State to announce if genocide was being committed against religious and ethnic minorities in the Middle East and North Africa by the Islamic State.

It argues that the case for genocide exists and called on Secretary of State John Kerry to make such a declaration and to include Christians in it.

The organizations said they planned to send the report to Kerry.

State Department officials hinted in October that a genocide designation was coming for the Yezidi minority, but not for Christians. The comments led to a firestorm of protest from Christian groups that resulted in congressional action setting the March 17 deadline for Kerry to respond.

The report contains dozens of statements collected from Feb. 22 through March 3 from witnesses and victims of atrocities carried out by Islamic State forces. The incidents include torture, rapes, kidnappings, murder, forced conversions, bombings and the destruction of religious property and monuments.

“Murder of Christians is commonplace. Many have been killed in front of their own families,” said the report, titled “Genocide Against Christians in the Middle East.”

It cites statements from religious leaders, including Pope Francis, and conclusions from the European Parliament, the U.S. Commission on International Religious Freedom and the Iraqi and Kurdish governments, all of which have labeled the Islamic State’s actions as genocide.

The report includes a legal brief directed toward Kerry detailing the case for a genocide designation.

The European Parliament adopted a resolution in February stating that the Islamic State was “committing genocide against Christians and Yezidis and other religious and ethnic minorities who do not agree with the so-called ISIS/Daesh interpretation of Islam, and that this, therefore, entails action under the 1948 U.N. Convention on the Prevention and Punishment of the Crime of Genocide.”

The U.S. Commission on International Religious Freedom called on the U.S. government in December to designate Christian, Yezidi, Shiite Muslim, Turkmen and Shabak communities in Iraq and Syria as victims of genocide by the Islamic State.

The Knights of Columbus and the Washington-based In Defense of Christians began a petition campaign in late February asking Kerry to make a genocide declaration. The organizations said more than 50,000 people had signed on through March 9.

The organization highlighted numerous Christian religious leaders and prominent people who signed the petition. Among them were Archbishop Joseph E. Kurtz of Louisville, Kentucky, president of the U.S. Conference of Catholic Bishops; Bishop Oscar Cantu of Las Cruces, New Mexico, chairman of the bishops’ Committee on International Justice and Peace; Cardinal Timothy M. Dolan of New York, chairman of the Catholic Near East Welfare Association; Archbishop Jose H. Gomez of Los Angeles; Bishop A. Elias Zaidan of the Maronite Eparchy of Los Angeles and Andrew Benton, president of Pepperdine University.

Archbishop Gomez explained his stance while lamenting the March 4 deaths of four Missionaries of Charity sisters and 12 other people killed by uniformed gunmen who entered the home the sisters operate for the elderly and disabled in Yemen, in a column for Angelus, the online edition of The Tidings, the archdiocesan newspaper.

“It is clear that what the so-called Islamic State is doing to Christians and other minority groups in Iraq and Syria fits the United Nations’ definition — violence and killing with ‘intent to destroy, in whole or in part, a national, ethnical, racial or religious group,'” he wrote.

PREVIOUS: Panel: In public discourse, state your case, don’t demonize ‘the other’