Notre Dame to honor Biden and Boehner with 2016 Laetare Medal 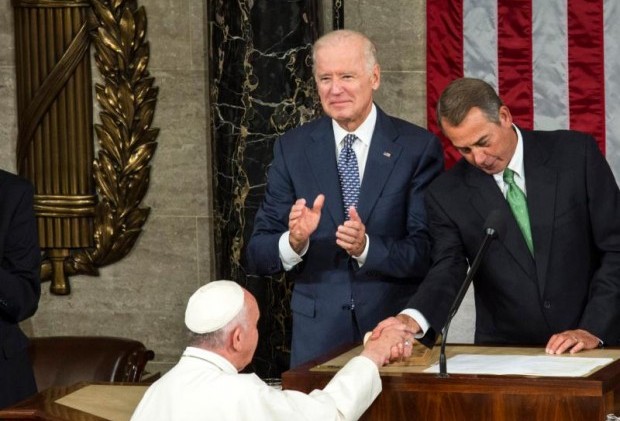 SOUTH BEND, Ind. (CNS) — With public confidence in government “at historic lows” and cynicism “high,” the University of Notre Dame will present its 2016 Laetare Medal to two public servants known for “their leadership, civility and dedication to our nation,” the university’s president announced.

Vice President Joe Biden and former Speaker of the House John Boehner — two Catholic officials from opposing political parties — will be this year’s recipients of the medal.

They will be honored May 15 during Notre Dame’s 171st commencement ceremony.

“We live in a toxic political environment where poisonous invective and partisan gamesmanship pass for political leadership,” said Holy Cross Father John I. Jenkins, Notre Dame’s president. “Public confidence in government is at historic lows, and cynicism is high.

“It is a good time to remind ourselves what lives dedicated to genuine public service in politics look like. We find it in the lives of Vice President Biden and Speaker Boehner,” the priest said.

By recognizing both men, Father Jenkins said, “Notre Dame is not endorsing the policy positions of either, but celebrating two lives dedicated to keeping our democratic institutions working for the common good through dialogue focused on the issues and responsible compromise.”

The Laetare Medal has been given annually since 1883 to a Catholic “whose genius has ennobled the arts and sciences, illustrated the ideals of the church and enriched the heritage of humanity.”

The honor is so named because its recipient is announced each year in celebration of Laetare Sunday, the fourth Sunday in Lent, which this year was March 6.

“Laetare,” the Latin word for “rejoice,” is the first word in the entrance antiphon of the Mass that Sunday, which ritually anticipates the celebration of Easter. The medal bears the Latin inscription, “Magna est veritas et prevalebit” (“Truth is mighty, and it shall prevail”).

While both Biden, a Democrat, and Boehner, a Republican, “have been loyal and committed partisans, they were leaders who put the good of the nation ahead of partisan victory, seeking through respectful dialogue honorable compromise and progress,” Father Jenkins said in his statement.

“Boehner’s resistance to a simple reductionism made him suspect in his own party; Vice President Biden reminded his fellow Democrats that those in the other party are ‘our opponents, not our enemies,'” the priest added.

Before his election as vice president in 2008, Biden represented Delaware in the U.S. Senate for 36 years.

At age 29, he became one of the youngest people ever elected to the U.S. Senate. Soon after his election, his wife and infant child were tragically killed in an automobile accident, yet he persevered in caring for his family as a single parent and in serving in the Senate. He commuted between his home in Delaware and Washington for many years.

In the Senate, Biden served as chairman or ranking member of the Judiciary Committee for 17 years and played an integral role in the 1994 Crime Law and the Violence Against Women Act. He also served for 12 years as chair or ranking member of the Senate Foreign Relations Committee, helping to guide issues and legislation related to terrorism, weapons of mass destruction, post-Cold War Europe, the Middle East and Southwest Asia.

Boehner became Speaker of the House in January 2011 and was re-elected in January 2013 and January 2015. He stepped down from the post and resigned from Congress last fall.

He was first elected to the U.S. House in 1990, serving the 8th Congressional District of Ohio, and was re-elected 10 times.

Among House Republicans, Boehner served as conference chairman, minority leader and majority leader. He also served as chairman of the House Education and Workforce Committee where he was the author of several reforms, including the Pension Protection Act and a school-choice voucher program for low-income children in Washington.

Growing up in southwest Ohio, the second of 12 children, he was raised in a family of modest means. After graduating from Jesuit-run Xavier University in Cincinnati, he worked in business and served in the Ohio Legislature.

Retired U.S. Army Gen. Martin Dempsey, chairman of the Joint Chiefs of Staff from 2011 to 2015, will deliver the principal commencement address and receive an honorary degree at the May ceremony. Others scheduled to receive honorary degree include are civil rights activist Diane Nash, musician Arturo Sandoval and Washington Cardinal Donald W. Wuerl.

NEXT: Former first lady Nancy Reagan dies; made anti-drug effort her cause