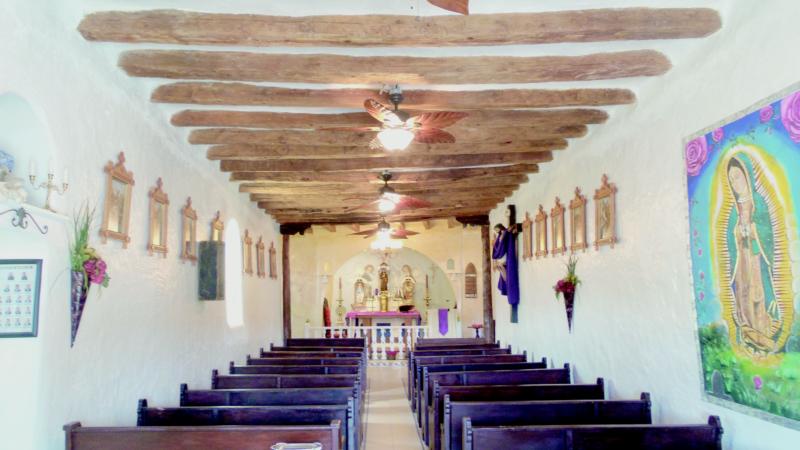 The wooden ceiling beams called vigas are seen March 5 in the rustic San Francisco de Asis Church in Golden, N.M. As a restoration of the church's beams was underway, a 200-year-old painting was stolen from the church. (CNS photo/Zita Fletcher)

GOLDEN, N.M. (CNS) — While the doors of a small, old adobe church in a former gold-mining town were open during a construction project, an unknown person walked down the aisle, slipped into the sacristy and walked off with a 200-year-old painting.

The painting, a unique image of the Sacred Heart of Jesus, recently disappeared from San Francisco de Asis Church during a restoration project. As crews worked to refurbish old wooden ceiling beams called vigas, the painting — measuring about 20-by-30 inches and weighing between 40 and 50 pounds — was stolen.

The theft in Santa Fe County has left the close-knit parish community feeling distressed and confused.

“It’s certainly saddening for any church to find that somebody took something,” commented Dominican Father Jon Alexander, pastor. “You don’t expect it.”

Built in 1839, the church sits on a hill surrounded by scenic green slopes in the rural town of Golden at the base of the San Pedro Mountains in the Archdiocese of Santa Fe. The site of the first gold rush west of the Mississippi River, the town once was a booming mining settlement in the 1870s with saloons and camps of prospectors seeking placer gold. After the gold ran out, the town was largely abandoned by the 1900s.

Although some describe Golden as a ghost town, the parish of San Francisco de Asis is very much alive. Residents of nearby towns and far-off cities travel to visit the old church and attend liturgies every weekend.

The interior of the tiny church is decorated with touching care. Many furnishings were donated by parishioners. Even the stained-glass windows were crafted by a local.

The stolen painting was donated to the church by the family of Michael Montano, a resident of Albuquerque, who volunteers to help maintain the church. A plaque outside the church bears Montano’s name among other volunteers and contributors, “In Recognition of Hard Work & Generous Donation.”

Montano appealed to whomever has the painting to return it. “We would like to have it back,” he said. “It belongs to the church here.”

Dottie Melendez called the theft a violation of the parish community. She and her husband, John Melendez, are the major-domos, or caretakers, of the church. They work on a voluntary basis, maintaining the interior of the building and the furnishings.

Dottie was the first person to notice the painting was missing. “John and I looked for it everywhere and couldn’t find it,” she recounted. “So the next Saturday when there was Mass, I asked Michael, ‘What happened to the big picture?’ And he said, ‘I don’t know.'”

There was no sign of a forced entry. The theft appears to have been a crime of opportunity. While the doors were open, and everyone was distracted with the construction project, the antique painting vanished without a trace.

Realizing the painting was stolen, Dottie recalled her dismay. “I was worried, saddened, and thinking, ‘Well, who would do that?'”

At the following Mass, Father Alexander appealed to anyone who might have a clue about the painting’s whereabouts to give information. No one has yet come forward.

This is not the first time the small country church has been targeted by thieves. Years ago, all of the Stations of the Cross were snatched from the walls. According to parishioners, one of the stolen images later appeared for sale on Craigslist.

In a recent break-in at the parish, an unknown intruder smashed through the sacristy window and absconded with a plaster bust of Jesus and a picture of Our Lady of Guadalupe as well as small food items and utensils from the kitchen.

Montano decided to volunteer to help restore and protect the church because of break-ins and vandalism. He recalled a time when thieves did not allow even the dead to rest in peace. Robbers repeatedly stole antique headstones from the old church cemetery. So Montano built a wall to protect the gravesites.

“When you look at something, you might think, ‘Well, that’s not very valuable,'” said John Melendez. “But for us, it is very valuable. It’s ours here and it should be respected.”

In response to the theft of the painting, the parish council has decided to photograph and catalog all items in the church. Other safety measures are also in discussion. Iron anti-theft bars may soon cast shadows over the tiny stained-glass windows.

Parishioners said they cannot determine the financial value of the painting. However, what they all agree on is that it has great sentimental worth.

“You can have a painting that’s 100 or 200 years old, and somebody can sell it for whatever they want, because to them they don’t care,” said John Melendez. “But for us, it’s priceless.”