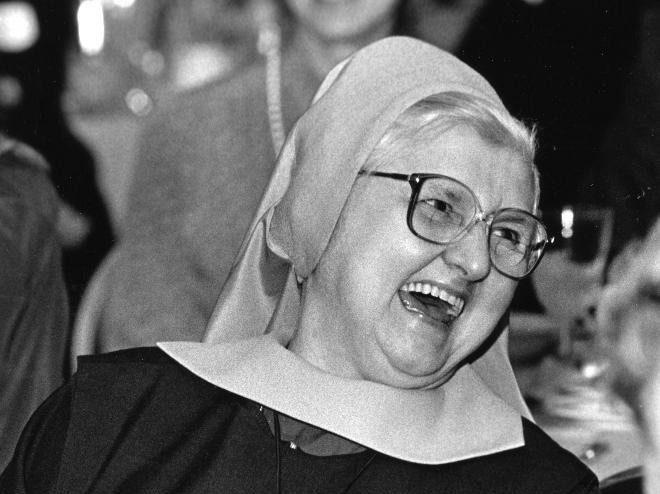 Mother Angelica, founder of Eternal Word Television Network, is pictured in an undated photo. She died March 27 at the Poor Clares of Perpetual Adoration monastery in Hanceville, Ala. She was 92. (CNS files)

“Like the best evangelists, she used the communications tools of her time to make this happen. She displayed a unique capacity for mission and showed the world once again the vital contribution of women religious.”

Archbishop Kurtz was one of several Catholic leaders who took note of the March 27 death of Mother Angelica, a Poor Clare of Perpetual Adoration, who founded the Eternal Word Television Network. Virtually all of them, at one time or another, had appeared on EWTN.

“Her work, begun in the cloister, reached across the globe,” Archbishop Kurtz said in a March 28 statement. “She was a convincing sign as to how even the humblest of beginnings can yield abundant fruit.”

Archbishop Charles J. Chaput of Philadelphia, who served on the EWTN board of directors for many years, called Mother Angelica “a woman of extraordinary faith, intelligence, energy and determination.” He added he “saw firsthand the tremendously positive impact her work for Jesus Christ had on many millions of people.”

“Mother Angelica brought the truth and the love and the life of the Gospel of Jesus to so many people, not only to our Catholic household of faith, but to many thousands of people who are not Catholic, in that beautiful way she had of touching lives, bringing so many people into the Catholic faith,” said Bishop Robert J. Baker of Birmingham, Alabama, in whose diocese EWTN is located. 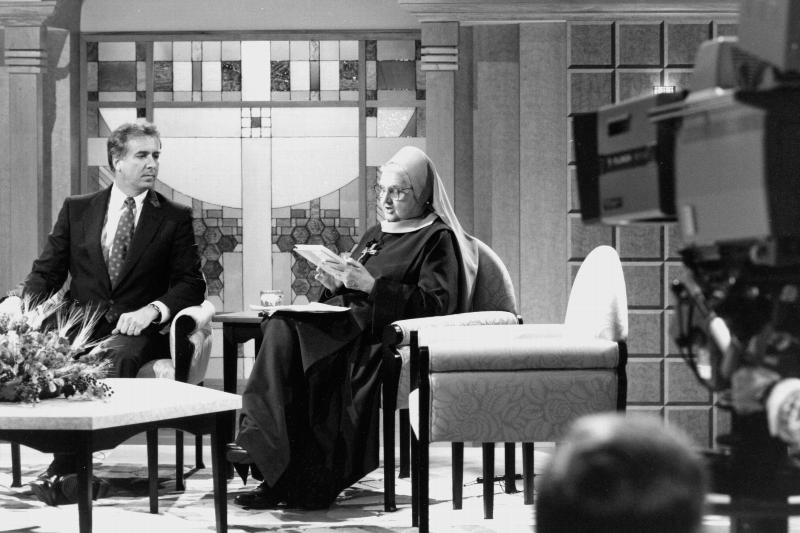 Mother Angelica, founder of the Eternal Word Television Network, is pictured in a 1992 photo.(CNS files)

“Mother Angelica was a pioneer of the new evangelization before that term ever became popular,” said Msgr. Walter Rossi, rector of the Basilica of the National Shrine of the Immaculate Conception in Washington, the site of many Masses telecast live each year by EWTN.

“By providing religious programming, the Mass and devotions, first by television and now by every form of communications media, Mother Angelica and EWTN proclaimed the message of the Gospel to millions of people throughout the world,” he said.

“She untiringly exhorted all to pursue holiness by living with God in the present moment. We are grateful for your prayers for this courageous daughter of the church,” said Mother Dolores Marie, superior of the Poor Clare Nuns of Perpetual Adoration of Our Lady of the Angels Monastery in Hanceville, Alabama. The monastery is north of the Birmingham suburb of Irondale, where EWTN has its headquarters.

“Her voice and her message will be with us for a long time,” said a statement from Father Frank Pavone, national director of Priests for Life, about Mother Angelica. “We have all lost a friend, a mentor, a spiritual mother, a voice of conscience, and a source of laughter and encouragement.”

“Mother Angelica was a true media giant. She proved that the church belonged in the popular media alongside the news, sports, and talk shows,” said Franciscan Father Michael O. Sheridan, president of the Franciscan University of Steubenville, Ohio. The show “Franciscan University Presents,” a roundtable theology discussion, has been produced by the university for EWTN since 1993.

“She heeded the call of the Second Vatican Council to bring the Gospel message into contemporary society. With humor and the occasional stern word, but always moved by a deep love of people, Mother Angelica faithfully conveyed the knowledge and love of God to Catholics, Christians, and nonbelievers alike,” Father Sheridan added.

“Mother Angelica leaves behind a legacy of holiness and commitment to the new evangelization that should inspire us all,” said Carl Anderson, supreme knight of the Knights of Columbus.

“I was honored to know and be able to assist Mother Angelica during the early days of EWTN. Over the years, that relationship grew, and today the Knights of Columbus and EWTN partner regularly on important projects. Mother Angelica was fearless, because she had God on her side,” Anderson said. “She saw what he needed her to do and she did it!”