U.S. architect recalls events that led him to design chapel at Vatican 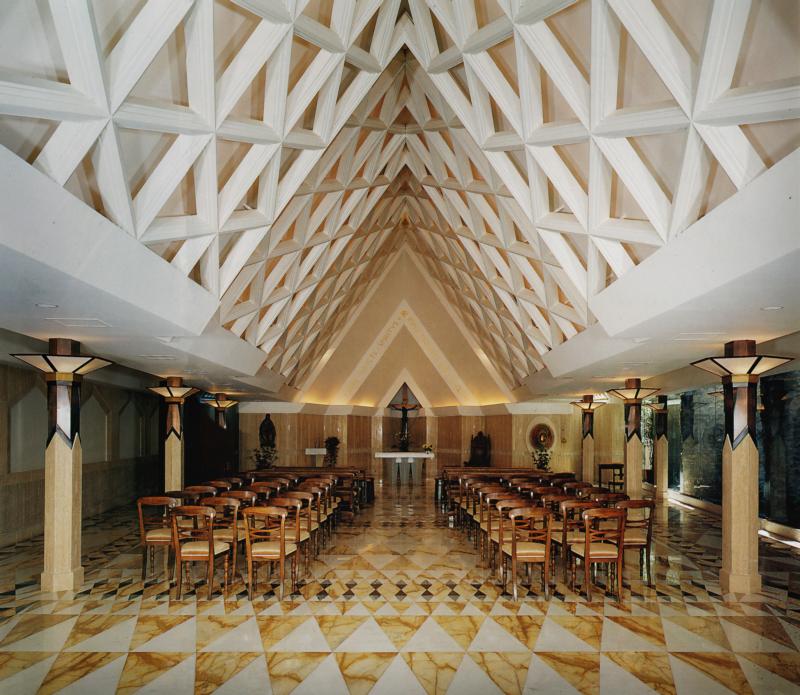 The interior of the Chapel of the Holy Spirit in Rome is seen in this undated photo. The chapel is the only building at the Vatican designed by an American. Pittsburgh architect Louis Astorino used triangles throughout the design to symbolize the Trinity. (CNS photo/courtesy of Astorino) 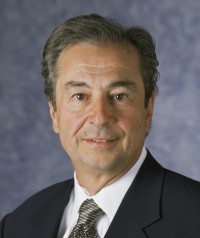 Louis D. Astorino, architect of the Chapel of the Holy Spirit at Domus Sancta Marthae. The Pittsburgh native is the only American to construct a building at the Vatican. (CNS photo/courtesy of Astorino) See ARCHITECT-CHAPEL-POPE March 2, 2016.

PITTSBURGH (CNS) — Since he was elected in 2013 and decided to live in the Domus Sanctae Marthae instead of the apostolic apartments, Pope Francis has said daily Mass in the Chapel of the Holy Spirit located just next to the modest hotel.

Prior to the pope moving in next door, only visitors to the Domus Sanctae Marthae used the chapel. Since then cardinals, bishops and religious along with Vatican maintenance staff, gardeners and others invited to daily Mass with Pope Francis have been inside.

The pontiff’s daily homilies are one of the highlights of his pontificate and offer a window into Francis’ theology. However, one of the things that makes this chapel unique is that it is the first building in the Vatican designed by an American. The architect is Louis Astorino, a Pittsburgh native whose work includes critically acclaimed PNC Park, home of the Pittsburgh Pirates.

In 1993, Astorino, founder of the firm Astorino, went to the Vatican to consult on the design of the Domus Sanctae Marthae, which would be built on the site of an old hospice. John Connelly, a Pittsburgh businessman and entrepreneur who was financing the hotel’s construction, brought him in.

The idea for Domus Sanctae Marthae came from St. John Paul II. Synods of bishops were being held more regularly, and those, combined with the annual “ad limina” visits, meant there was a need for a place where visiting clergy and bishops could lodge. Some larger, wealthier countries have seminaries in Rome where visiting clergy and bishops stay but those from smaller countries must find other accommodations.

The pontiff also had the election of his successor in mind. During previous conclaves, cardinals slept on cots in the halls of the Vatican Museum, sharing bathrooms and having little privacy.

“John said when he found out about that, he said he would fund the hotel,” said Astorino, who is now retired. Connelly’s only stipulation for funding the project was that he be able to stay there when he visited and “he said, ‘I know the best architect in the world and I want him to do the architecture.'”

When Astorino and Connelly went to Rome for their first meeting, they discovered the Vatican already had a design for the hotel. During that meeting, the Vatican asked Astorino to consult on the design, because neighbors were worried that the hotel would obstruct their view of the dome of St. Peter’s Basilica. Vatican officials were considering lowering the hotel to the level of the ancient Leonine Wall located next to the site to prevent the problem. Pope Leo IV (847-855) constructed the wall to protect the Vatican from the Saracens. 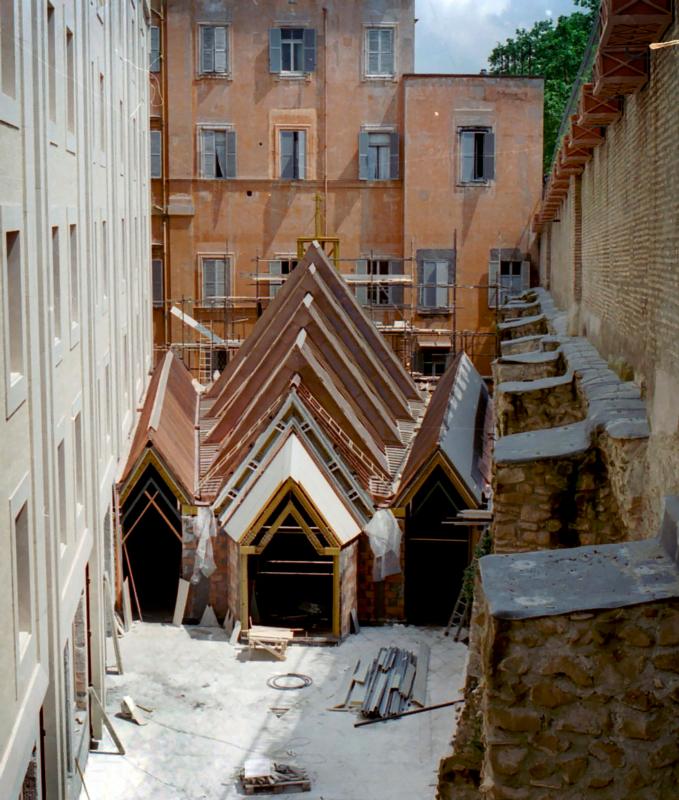 The Chapel of the Holy Spirit in Rome is seen under construction in this undated photo. (CNS photo/courtesy of Astorino)

Later in 1993, Astorino returned to the Vatican with proposed changes to the original design. The Vatican engineer who created the design repeatedly objected to different parts of the new proposal and Astorino saw hurdles ahead.

“I thought, ‘This is going to be a battle from day one.’ So I pulled John aside and I said, ‘John, this should be a good experience for you,'” Astorino recalled. “‘I think this engineer will torture us.'”

The American pulled his proposals from consideration and that evening all parties went out to dinner to celebrate final approval of the hotel’s design. Everyone was in good spirits except Astorino.

“I was down in the dumps because I felt I let God down. I had an opportunity here to make a difference in the Vatican and to help and I blew it,” Astorino said in an interview for Catholic News Service.

A day later Venezuelan Cardinal Rosalio Jose Castillo Lara, then president of the Administration of the Patrimony of the Holy See, proposed a new project for him — to design the hotel’s chapel.

“I smacked myself on the side of the head and I said, ‘Oh my God. Where is my faith?'” he said. God didn’t want him to do a hotel but a chapel. “It was just a marvelous moment for me.”

In December 1993 Astorino and his team received the official appointment as architects for the new chapel.

“It was from that moment on that I felt I became a pencil in God’s hands. I just prayed and listened and tried to design this chapel to be something that God would be proud of and so would everyone using it,” said Astorino.

The space presented challenges since it was small, triangular and located between the hotel and the Leonine Wall, which they couldn’t alter. To Astorino, the space was a message from God, since for centuries the triangle has served as a symbol of the Trinity. The triangle also regularly occurs in nature — in leaves, snowflakes and crystals.

“If you really study nature and God’s work you’ll see triangles in everything,” Astorino said.

He and his staff let the triangle direct the chapel’s major design elements — the floor, ceiling and walls. “The mystery of the Holy Spirit, the mystery of the Trinity would speak from every angle of the work, literally and figuratively,” he said.

The axis of the Chapel of the Holy Spirit and the axis of the dome of St. Peter’s Basilica — along which lays the tomb of St. Peter — intersect at the entrance to the chapel. To mark the significance of this — especially for the times of conclave when cardinals pray there before electing a successor to St. Peter — they commissioned a bronze sculpture of an inverted cross and placed it on the spot. History states that St. Peter asked to be crucified upside down because he didn’t feel worthy of dying the same way Jesus did.

Four thousand pieces of marble in different colors and sizes form a triangular grid that makes up the chapel floor. The floor pattern contains symbolic references to the Trinity, Jesus and the Twelve Apostles. The ceiling reflects the floor with an embossed triangular grid hiding soft lighting. Another dramatic element is the glass wall along the right side displaying the ancient Leonine Wall and the Stations of the Cross. A series of mosaics depicting the seven gifts of the Holy Spirit are on the opposite wall. Even the copper roof displays the triangular influence.

As a finishing touch, the words “O Come Holy Spirit, Renew the Heart of Thy Faithful” are on an arch over the altar in Latin.

Construction began in 1995 and finished a year later. St. John Paul was the first person to pray in the chapel.

Shortly after its completion, Cardinal Donald W. Wuerl of Washington, who was the bishop of Pittsburgh at the time, celebrated Mass there with some Pittsburgh priests and a group that included Astorino and his wife.

“You recognize just how keen an eye he (Astorino) has because the space he had to work with was somewhat limited. What he was able to do was maximize it so that it does all come together as one piece even though it is an odd configuration of a floor plan,” Cardinal Wuerl said. “It’s a beautiful chapel. It’s very prayerful chapel. And of course the inspiration that you see every time you turn around, every time you look in there, is the Holy Spirit and the Trinity.”

Cardinal Wuerl joined the other cardinals in praying there before entering the Sistine Chapel for the conclave that elected Pope Francis. It was a powerful experience, he said.

“One of the old cardinals who was not in the conclave said to me, ‘When you are in the chapel, open your heart to the Holy Spirit. Then when you’re in the conclave in the Sistine Chapel and they close the door, just listen.'”

The chapel is a unique legacy at the Vatican that makes Cardinal Wuerl proud.

“I’ve said this to him (Lou) many times, that will always be the Astorino chapel. There is Nervi Hall, the Lateran dome, the Laventes facade. He’s in good company,” the cardinal said. “Hundreds of years from now people will go in and say, ‘Oh, this is the Astorino chapel.’ It’s no small thing.”

NEXT: Ability to ‘see’ can dissolve racism, Cardinal Turkson says