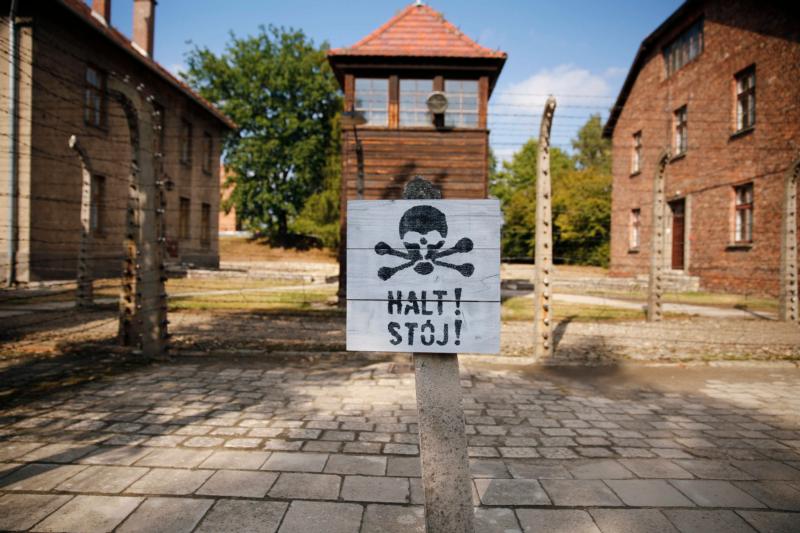 A guard tower is seen beyond on area enclosed with barbed wire at the Auschwitz-Birkenau Memorial and State Museum in Oswiecim, Poland. The Auschwitz memorial and museum is setting aside days exclusively for World Youth Day pilgrims who want to tour the former Nazi death camp. (CNS photo/Nancy Wiechec)

The museum has set aside July 20-28 and Aug. 1-3 for participants in World Youth Day, which runs July 26-31 in Krakow, about one-and-a-half hours away.

World Youth Day officials set aside 300,000 spots and asked participants to register for the dates. In early March, they said about 57,000 spots remained. Participants who wish to visit the museum on the designated days must register at http://mlodzi.duszpasterstwa.bielsko.pl/auschwitz.

A record 1.72 million people visited the Auschwitz memorial and museum in 2015. It was the largest group ever to tour the former Nazi death camp in any given year.

The largest number of visitors came from Poland, 425,000; the United Kingdom, 220,000; and the United States, 141,000. Young people made up the majority of visitors, according to the museum’s annual report.

Between 1940 and 1945, more than 1 million Jews and tens of thousands of Poles, Roma, Soviet POWs and others were murdered by the SS at Auschwitz. The SS, which originated as the elite guard of the Nazi Party, later became units of fanatical soldiers and concentration camp guards.

Among those killed were St. Maximilian Kolbe, a Polish Conventual Franciscan friar, and St. Edith Stein, a Jewish philosopher who converted to Catholicism and became a Carmelite nun.

The starvation cell, where St. Maximilian and others spent the last days of their lives, can be viewed in the basement of Block 11. It is known as “the death block” because it was used by the SS to inflict torture.

Auschwitz has stood as testament to the Holocaust for 70 years. Education, preservation and research is a large part of the museum’s ongoing mission.

Among the exhibits are heaps of eyeglasses, shoes, suitcases, Jewish prayer shawls, clothing, kitchenware, baskets and other personal items belonging to victims. A mound of worn hair and shaving brushes is on display in one room. Along a wall in another, clumps of human hair, shaven from those imprisoned and killed in the camp, are piled behind glass.

Polish Catholic leaders have expressed hope that Pope Francis might visit Auschwitz in July when he comes to Poland for World Youth Day. St. John Paul II visited in 1979 and Pope Benedict XVI in 2006.

NEXT: With drought, Ethiopian church feeds kids to keep them in school