Philippine cardinal challenges Asians to become church of the poor 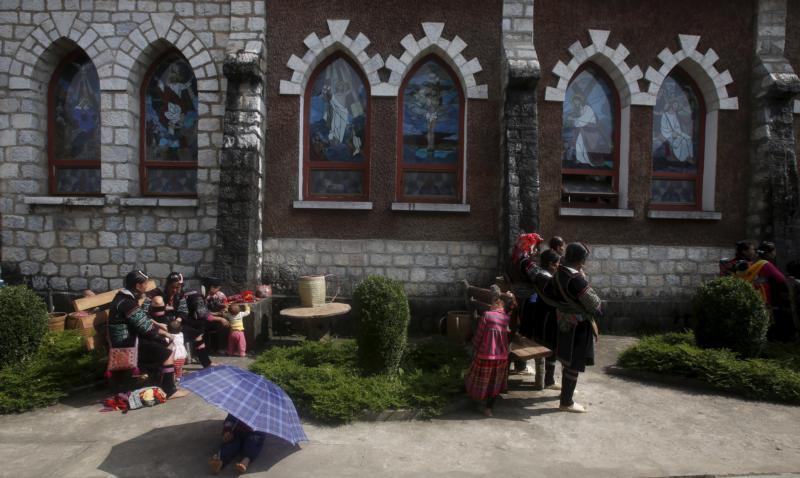 Ethnic Hmong attend Mass outside a church in Sapa, Vietnam, in this Oct. 18, 2015, file photo. The former head of the Federation of Asian Bishops' Conferences has challenged the continent's church leaders to evangelize by being a church of the poor. (CNS photo/Kham, Reuters) 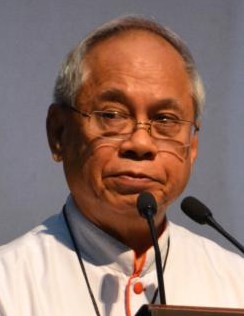 Cotabato Cardinal Orlando Quevedo of the Philippines gives a talk on the challenges of new evangelization for the church in Asia at Ateneo de Manila University March 10. (CNS photo/Simone Orendain)

QUEZON CITY, Philippines (CNS) — The former head of the Federation of Asian Bishops’ Conferences has challenged the continent’s church leaders to evangelize by being a church of the poor.

Cardinal Orlando Quevedo of Cotabato, Philippines, said Jesus “strikes at the natural upward mobility of humankind … and goes down to the downtrodden, walks among them, lives with them, takes up their burdens, calls them his friends. This predilection for the poor, we now call his preferential option for the poor. This is how we see Jesus with an Asian face.”

In a talk March 10 before an audience of theology students, religious and clergy at the Loyola School of Theology of the Ateneo de Manila University, Cardinal Quevedo said telling the story of Jesus through dialogue between cultures, different faiths and with the poor will be the most effective mode of evangelization in Asia.

According to Pew Research Center statistics from 2011, the world’s poorest people live in Africa and Asia. In an interview with Catholic News Service after his presentation, the cardinal pointed out that Africa and Asia are also where Catholicism has been steadily increasing.

Of the 21 member and associate member countries of the Federation of Asian Bishops’ Conferences, only the Philippines and East Timor are Catholic majority countries. South Korea has one of the fastest-growing Catholic populations in Asia.

Cardinal Quevedo, who was president of the FABC from 2005 to 2011, told CNS bishops in Asia face a challenge.

“We treat the poor as ‘they and we — we bishops and they,'” he said, adding that they don’t often think “‘all of us must be church of the poor.’ All of us must have evangelical poverty. All of us must promote social justice, especially for those who are deprived.”

He said the Asian church has to move forward with new evangelization.

“What we say about the idea of a ‘church of the poor’ is something we need to realize rather than what we are at present. The same thing is true with the idea of dialogue, (it’s) what we’d like to do. And I think that’s the challenge for Asia in the next 50 years: to be what we wish to be.”

In his presentation, Cardinal Quevedo said there were other challenges for the church, such as not being taken seriously, especially in trying to work as “prophetic evangelizers” who have to go against the “contradictions of Asia.” Those include increasing economic globalization while poverty continues to grow because of migrant and refugee movement.

“When a clown says there is a fire, no one believes him,” said the cardinal. “While people ask modern-day questions, very secular questions … the theologians answer directly that question, but the answers are not taken seriously because they are not believed in. So the church and theologians continue to be clowns … their answers, our answers are sometimes sarcastically called archaic, ultra-conservative and so on.”

But Cardinal Quevedo said that even with the challenges, the new evangelization efforts of the church in Asia are starting to bear fruit.

He told CNS this is most apparent in Asia’s basic ecclesiastical communities, in which the church is “brought to the people” or taken to the grass-roots level and lets the laity, usually in poor communities, become more actively involved in serving, leadership work and church life in general.

“We have the same challenge in Latin America, which is the church for the poor,” Beltran-Aceves told CNS. “The church seems to be a big institution, sometimes very powerful, only for the rich, who cares only a little for the poor.”

Beltran-Aceves said the discussion reiterated one of the main platforms of Pope Francis, which is to “care more for the poor and to contextualize the faith, in which we can not only preach, but also (give) help in a complete way to the poor.”