Bosnian church questions chances for peace unless rights are recognized 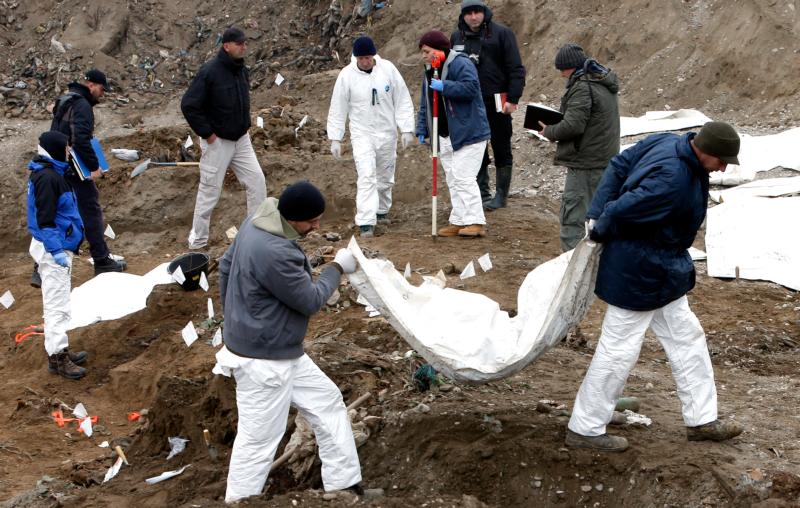 Forensic experts exhume bodies from a mass grave in Kozluk, Bosnia, in this Dec. 15, 2015, file photo. Msgr. Ivo Tomasevic, secretary-general of the Bosnian bishops' conference, called for equal rights for all religious and ethnics groups if the conditions of the 1995 agreement that ended more than three years of war are to be fully realized. (CNS photo/Fehim Demir, EPA)

Msgr. Ivo Tomasevic, secretary-general of the Bosnian bishops’ conference, called for equal rights for all religious and ethnics groups if the conditions of the 1995 agreement that ended more than three years of war are to be fully realized.

“But while we’re always looking for ways of doing more, the structures imposed by our country’s 1995 peace agreement are wrong. Catholics aren’t having their identity respected, and this is impeding our peace efforts,” he said.

Pope Francis’ one-day pilgrimage had led to “greater openness and self-confidence” and a readiness to cooperate among Bosnians, Msgr. Tomasevic told Catholic News Service. However, he explained, peace efforts by Catholic priests and bishops would gain little public response unless the rights of all religious and ethnic groups were guaranteed.

Bosnia-Herzegovina is an amalgam of religious and ethnic communities. Mostly ethnic Croatian Catholics make up 15 percent of the country’s 4.3 million citizens, with Muslims and Orthodox Serbs constituting 48 percent and 37 percent, respectively.

A church report published March 2 indicated the Catholic population had fallen by 14,500 in 2015 and reached “demographic stagnation,” because of “unresolved national and political issues” since the war, which claimed more than 100,000 lives and ended with the formation of separate Serb and Croat-Muslim territories in one nation.

Cardinal Vinko Puljic of Sarajevo, Bosnia-Herzegovina, told Croatia’s Catholic information agency, IKA, March 7 that he feared a return to “extremism” in the country and that the “very slow process of reconciliation” was fueling “crime, greed, selfishness and arrogance.”

An American academic engaged in Bosnia-Herzegovina peacebuilding efforts suggested that the church could be doing more to seek practical initiatives with other religious groups.

“The pope’s peace message was warmly welcomed by Christians and Muslims alike, but while Catholics in central Bosnia, led by the Franciscan order, have been active in peacemaking, the church as a whole lacks an openness to other religious communities,” said Julianne Funk, a political science lecturer at the University of Zurich. She coordinates Balkan peacebuilding projects for the Sarajevo-based Transcultural Psychosocial Educational Foundation.

“Greater efforts should be made, particularly in the church’s Herzegovina heartland, where Catholics seem a lot less disposed to rebuilding relationships of respect and trust,” she said.

Funk said she recognized that all religious groups in the country lacked high-level experience in peacebuilding, but that Muslim organizations appeared “more interested in bringing people together” despite “contrasting historical memories.”

During his 2015 visit, the Pope urged all citizens to be “equal both before the law and in its implementation in order to contribute to the common good and “feel truly involved in public life.” He suggested interreligious dialogue should not be left to religious leaders alone, but should “extend as far as possible to all believers, engaging the different sectors of civil society.”

Msgr. Tomasevic said the flight of much-needed young, educated citizens abroad had restricted Bosnian society’s capacity to “open itself to goodness and peace.”

“When possibilities exist for something better, it becomes ever more important to counter those impeding reconciliation,” he said.

“But in some parts of the country, Catholics now have no future and no possibility of working for change. Although every bishop has called many times for equal rights, the future still depends on reforming our country’s structures,” he explained.

Elsewhere, Bosnia-Herzegovina’s influential Franciscan order pledged to foster “the abandoning of resentments” at its March 5 assembly.

However, in a February letter to Patriarch Irinej of the Serbian Orthodox Church, Cardinal Puljic said Catholics had been “shocked, hurt and surprised” by recent Orthodox statements allegedly glorifying Bosnia’s Republic of Serbia as well as by the continued “killing, persecution and deprivation of human and civil rights” of non-Serbs since the 1995 peace agreement.

The cardinal said that his own home, the Diocese of Banja Luka, had fewer than 10,000 mostly elderly Catholics, compared to 200,000 before the war.