Pope marks third anniversary of election with talk on mercy 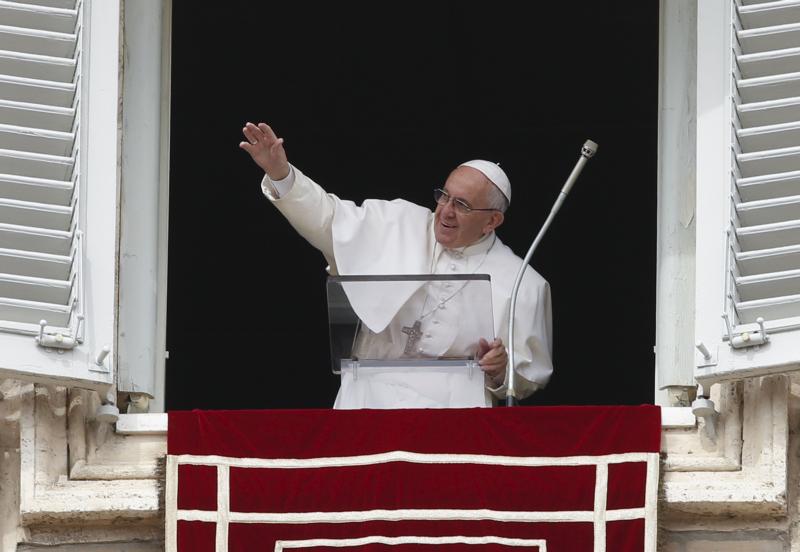 Pope Francis waves as he leads the Angelus in St. Peter's Square at the Vatican March 13. (CNS photo/Alessandro Bianchi, Reuters)

VATICAN CITY (CNS) — Pope Francis celebrated the third anniversary of his election with a simple Tweet — “Pray for me” — and the usual Sunday recitation of the Angelus prayer with tens of thousands of people gathered in St. Peter’s Square.

In his talk March 13, the pope did not mention the anniversary, but focused on God’s forgiveness and mercy as he did in his first Angelus address in 2013.

“God does not nail us to our sins; he does not identify us with the evil we have committed,” the pope told the crowd.

“God wants to free us,” the pope said. He wants people to use their freedom to do good and not evil. “This is possible — it’s possible — with his grace.”

Pope Francis’ Angelus address focused on the Gospel passage being read at Masses around the world: St. John’s account of Jesus and the woman caught in adultery.

The scribes and Pharisees, planning to stone the woman in accordance with the law, brought her to Jesus in an attempt to trick him. “If Jesus followed the severity of the law, approving the stoning of the woman, he would lose his fame of meekness and goodness, which so fascinated people,” the pope said. “But if he wanted to be merciful, he would go against the law, which he himself said he had come not to abolish but to fulfill.”

Jesus told the scribes and Pharisees, “Let the one among you who is without sin be the first to throw a stone at her.”

“This response scatters the accusers, disarming all of them in the true sense of the word,” the pope said. They leave one by one, beginning with the oldest, who is “more aware of not being without sin.”

Every sin is a betrayal of God, making people “adulterers before God,” the pope said. But Jesus says to all, like he said to the woman in the Gospel, “Go, and from now on do not sin anymore.”

“Her experience represents God’s will for each of us: not our condemnation, but our salvation through Jesus,” Pope Francis said.

At the end of the Angelus, retired workers from an Italian telephone company and members of a national association of retirees handed out a special gift from Pope Francis: “The Gospel of Mercy of St. Luke,” a small paperback edition of St. Luke’s Gospel.

The pope thanked the volunteers, especially those who are grandparents and share the faith with their grandchildren. Speaking from the window of the apostolic palace, he noticed that thousands of people were outside St. Peter’s Square and he asked the volunteers to “think about the people in Pius XII Square — you see they couldn’t get in — make sure they receive a copy of this Gospel, too.”

NEXT: Bosnian church questions chances for peace unless rights are recognized