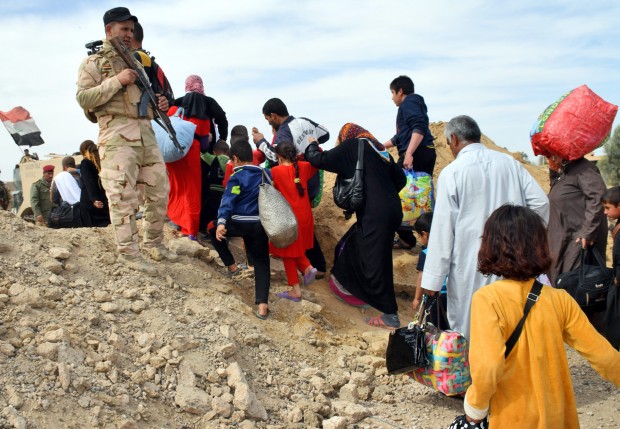 Iraqi soldiers observe the evacuation of families from the recently recaptured town of Zangura, Iraq, March 9. The British government has defeated an attempt to recognize the “genocide” of religious minorities by the Islamic State. (CNS photo/Nawras Aamer, EPA)

MANCHESTER, England (CNS) — The British government has defeated an attempt to recognize the “genocide” of religious minorities by the Islamic State group.

An amendment to the Immigration Bill was rejected, 148-111, after the government imposed a whip on lawmakers in the House of Lords in London to ensure that it would fail.

The measure, proposed by Lord Alton of Liverpool, a Catholic, called for the High Court to decide whether atrocities committed against Christians, Yezidis and other religious or racial minorities in Iraq and Syria constituted genocide.

It would have also obliged the government to consider applications for asylum from overseas if they were made by refugees belonging to the groups recognized as victims of the genocide. Currently, asylum applications are considered only when an applicant has landed on British soil.

The amendment was introduced after the European Parliament, the U.S. House of Representatives and U.S. Secretary of State John Kerry recognized that the Islamic State group was committing genocide against minority groups that did not share its own extremist Sunni Muslim beliefs.

The British government has resisted repeated calls to recognize the actions as genocide and, during the March 21 debate, Lord Alton said Britain had the chance “to close the gap” between the commitment made in ratifying the 1948 Convention on the Prevention and Punishment of the Crime of Genocide and the “reality of our actions.”

Lord Alton said: “We also have the opportunity to make a step change by moving beyond aerial bombardment to a consideration of justice, to demand that, under our commitment to the rule of law, however long it takes, we will bring those responsible for abhorrent mass executions, sexual slavery, rape and other forms of gender-based violence, torture, mutilation and the enlistment and forced recruitment of children to justice.”

But Lord Keen of Elie, a member of the ruling Conservative Party, described his proposal as “unworkable.”

“We have to be realistic about what we can and cannot achieve,” Lord Keen said. “What we cannot achieve is a policy whereby 4.8 million or more people are invited to make an application at a local level for a visa to bring them to the U.K.

“We know that we could not cope with the consequences of such a policy, and we know the potential disaster that could follow from attempting to impose one,” he continued. “We could never cope with such an immigration policy.”

He added: “The government believes that recognition of genocide should be a matter for international courts and that it should be a legal rather than a political determination. That remains the position.”

The third reading debate concluded the passage of the Immigration Bill, and it will become law after it receives royal assent later this year.

After the debate, Lord Alton described the defeat of his amendment as a “lamentable failure” to “recognize the crime above all crimes.”

“This should not have been a day for party whips and scaremongering arguments — such as being flooded with genocide victims — none of which brings Parliament credit,” he said in a March 21 statement.

“This was a day when Britain … simply chose to look the other way,” he said.

If the United Nations ultimately recognizes Islamic State atrocities as genocide, the countries that have signed the 1948 convention will be obliged to bring its activities to an end, to prioritize the protection of the victims, and to pursue and prosecute the perpetrators once the hostilities are over.