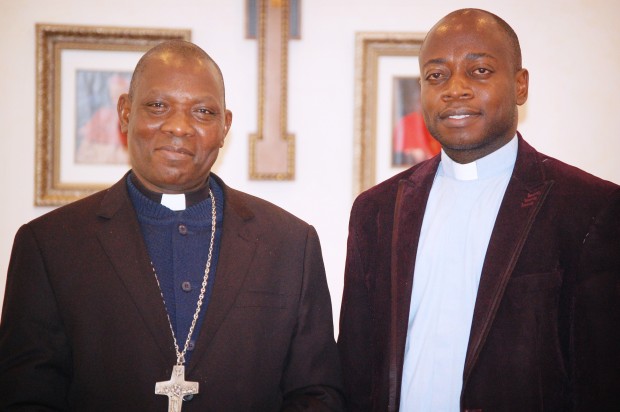 ST. FRANCIS, Wis. (CNS) — Bishop Oliver Dashe Doeme of Maiduguri, Nigeria, sat quietly in a room at St. Francis de Sales Seminary in suburban Milwaukee as he listened to his assistant, Father Gideon Obasogie, also from Nigeria, recall a story of one parishioner, a young boy.

The boy was taken by Boko Haram, an Islamic extremist group, and was gone for four days.

“The Boko Haram never touched him. He had the strength somewhere,” Father Obasogie said in an interview with the Catholic Herald, a publication serving the church in southeastern Wisconsin.

Father Obasongie said the boy was threatened with knives and guns.

“They blindfolded him and told the rest (of Boko Haram) they were going to take him to the forest to kill him,” Father Obasongie said. “And they took him out and dropped him by the roadside. … He found his way back home.”

While listening to this story, a single tear slowly descended halfway down Bishop Doeme’s face. This was a happy story, but it also was a rare story.

Bishop Doeme, 55, a native of the Nigerian state of Plateau, has been working in the Diocese of Maiduguri since 2009, and has had to deal directly with Boko Haram.

“Since its emergence, it has been one attack after another on the church, on individuals, families,” Bishop Doeme said.

The bishop, who was in Milwaukee to speak at the 10th annual Men of Christ Conference March 12, said it’s been difficult for the military to fight the terrorists.

“Some powerful people, from another part of Nigeria, supported this group,” Bishop Doeme told the Catholic Herald. “Individuals or groups supported this particular sect by giving them funds and arms for the members to use.”

The fighting between the government and the group has had a profound impact on the diocese.

“Even the priests had to run for their lives,” he said. “They couldn’t have stayed, and even if they did stay, who would they minister to?”

Bishop Doeme said more than 25 priests have been relocated to other parts of the country and neighboring towns to continue their ministry.

“Even the female religious had to run for their dear lives and their convents (were) destroyed,” he said. “It has been really devastating to our people.”

With the diocese under attack, Bishop Doeme has become accustomed to handling the anxiety.

“Fear will always come,” he said. “But then, as a believer, the faith overshadows the fear.”

He said that, as a bishop, his job is to face the threat head on.

“As the bishop, I am in a particular place because God has planted me there in order to serve the people,” he said. “One of the things that the bishop should never joke with is to abandon his people or to run away from his people. He shouldn’t do that at all.”

The most famous incident involving Boko Haram in the Diocese of Maiduguri is known in the United States as “Bring Back Our Girls.” According to the site www.bringbackourgirls.ng, Boko Haram terrorists abducted more than 270 schoolgirls from the Government Girls Secondary School in Chibok April 14, 2014.

“Most of the girls that were taken were Christians and I hope they’re still Christians,” Bishop Doeme said. He added that they continue to pray for their release, though so far only 56 girls have returned.

In 2014, Bishop Doeme claims he had a vision of Jesus Christ during eucharistic adoration.

“He had a sword in his hand,” Bishop Doeme said. “I received the sword and it turned into a rosary.”

He said he heard Christ say, “Boko Haram is gone.”

Bishop Doeme said prayer will eventually defeat the terrorist group. As for the vision itself, he doesn’t focus on it.

During their visit to Milwaukee, Bishop Doeme and Father Obasogie hoped to raise awareness of what’s been happening in their diocese. They were asking for prayers and for financial contributions to be sent directly to the diocese.

“I met the pope last year,” Bishop Doeme said, adding it was a brief meeting. “He’s praying for us, for me and my people. But even apart from that, he also sent some funds directly to us … so we’re able to take care of our own devastated people.”

There are rays of hope that come as the government continues to fight Boko Haram, he said.

“Some of these places that are captured, now, are freed,” Bishop Doeme said. “People have started coming back.”

One of those places was the previous parish of Father Obasogie, who was heartbroken when his parish was overtaken.

“Late last year, the military was able to chase the terrorists out and now people are coming back,” Father Obasogie said. “The place is still volatile, still very unstable … but people are quite faithful and are coming back.”

Father Obasogie said the diocese receives reports from priests when there are attacks.

“The first thing, we pray for them. But we’re really, really, really heartbroken,” Father Obasogie said. “Because a community that used to be very peaceful, quite friendly, very religious and faithful, and now you hear them calling from across the border, calling from the mountains.”

The fighting has resulted in the deaths of hundreds of Nigerian Catholics.

Torres is on the staff of the Catholic Herald, a publication serving the Catholic Church in southeastern Wisconsin.