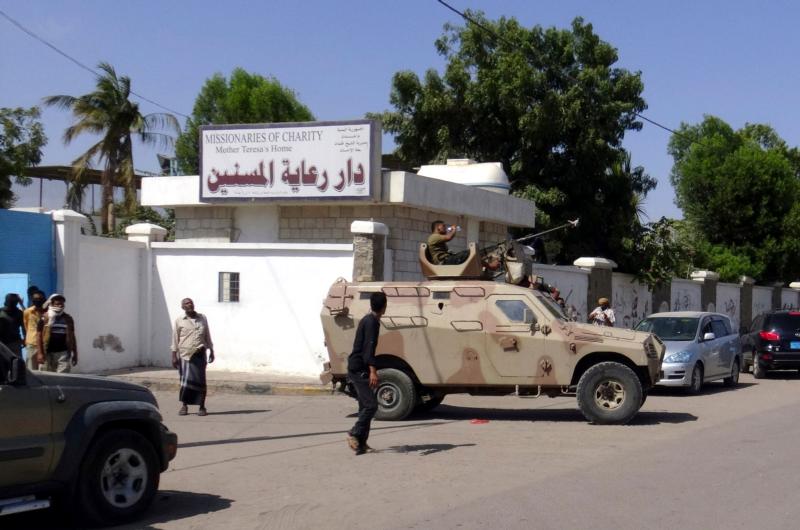 UPDATED – VATICAN CITY (CNS) — The four Missionaries of Charity murdered March 4 in Yemen “are the martyrs of today,” Pope Francis said. “They gave their blood for the church.”

After reciting the Angelus with thousands of people gathered in St. Peter’s Square March 6, Pope Francis publicly offered his condolences to the Missionaries of Charity and prayed that Blessed Teresa of Kolkata would “accompany to paradise these daughters of hers, martyrs of charity, and that she would intercede for peace and a sacred respect for human life.”

The four Missionaries of Charity and 12 other people were killed by uniformed gunmen, who entered the home the sisters operate for the elderly and disabled in Aden.

The superior of the Missionaries of Charity at the home survived by hiding, according to the Vatican’s Fides news agency. Father Tom Uzhunnalil, an Indian Salesian priest who had been living at the home since Holy Family Parish in Aden was sacked and burned in September, was missing after the attack.

Although the sisters would not make news headlines, Pope Francis said, the martyred sisters “gave their blood for the church.”

The sisters and the 14 others killed “are victims of the attack by those who killed them, but also (victims) of indifference, this globalization of indifference that just doesn’t care,” the pope said.

Yemen has been experiencing a political crisis since 2011 and is often described as being in a state of civil war with members of the Shiite and Sunni Muslim communities vying for power; in the midst of the tensions, terrorist groups have been operating in the country, including groups believed to be associated with the so-called Islamic State and al-Qaida.

Although most Christians have fled the country, a handful of Salesian priests and about 20 Missionaries of Charity chose to stay and continue their ministry.

In a condolence message released March 5 by the Vatican, Pope Francis described the Aden murders as an “act of senseless and diabolical violence.”

The pope “prays that this pointless slaughter will awaken consciences, lead to a change of heart, and inspire all parties to lay down their arms and take up the path of dialogue,” the message said. “In the name of God, he calls upon all parties in the present conflict to renounce violence, and to renew their commitment to the people of Yemen, particularly those most in need, whom the sisters and their helpers sought to serve.”

Bishop Paul Hinder, head of the vicariate of Southern Arabia, which includes Yemen, told AsiaNews, a Rome-based missionary news agency, that at 8:30 a.m. March 4, “persons in uniform” broke into the Aden compound, killing the guard and all employees who tried to stop them. “They then reached the sisters and opened fire.”

Two of the sisters killed were Rwandan, one was from India and one was from Kenya, the bishop said. Father Uzhunnalil apparently was kidnapped, he added.

“The signal was clear: This has to do with religion,” Bishop Hinder said.

In a statement released March 8, the U.S. Conference of Catholic Bishops’ Administrative Committee said that, through their sacrifice, the “martyrs of charity” were “transformed into signs of Christ’s victory over sin, violence and death.” They echoed the remarks of Pope Francis and invited people to join in solidarity with people “who see their lives threatened by evil, indifference, hatred, and terrorism.”

The bishops also urged the U.S. State Department to issue a declaration that genocide is occurring against Christians, Yezedis and other religious minorities in the Middle East.

PREVIOUS: Despite Chinese policies, church teaches Catholics to be open to life

NEXT: Vatican announces meeting to approve canonization of Mother Teresa