Give fragments of life, not doctrine, says preacher of Curia retreat 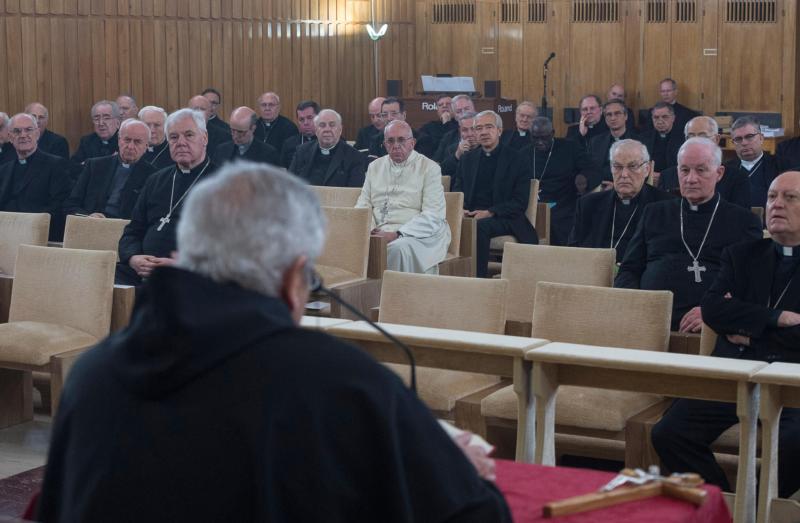 VATICAN CITY (CNS) — Jesus’ call to be the salt of the earth is a reminder to his disciples to preach hope and life and not be wrapped up in dogmatic conundrums, a Servite priest told the pope and Vatican officials.

“We are salt that has lost its flavor if we are not resolute men, if we are not free from masks and fear. People want to receive fragments of life from Jesus’ disciples, not fragments of doctrine,” Servite Father Ermes Ronchi said.

The Italian priest, who is a member of Rome’s Pontifical “Marianum” theological faculty, was chosen by Pope Francis to lead the Lenten retreat of the Roman Curia; he chose to preach on the theme: “The bare questions of the Gospel.”

The March 6-11 retreat was held at the Pauline Fathers’ retreat center in Ariccia, 20 miles southeast of Rome.

In his morning meditation March 7, Father Ronchi spoke about fear, which entered the world after Adam and Eve’s disobedience in the Garden of Eden. Adam’s hiding out of fear of God’s wrath, he said, indicates the effect of sin which keeps the possibility of mercy far from him. For Christians, he added, this fear “produces a sad Christianity, a God without joy.”

“In this sense, the enemy of fear is not courage but faith,” he said.

Reflecting on the passage in Mark’s Gospel (4:35-41) where Jesus calms the storm, Father Ronchi said that fear initially drives the disciples on the boat to “almost command” God to act and save them from doom.

However, he added, “God does not take us out of the storm but supports us within the storm.”

The church, which “for a long time has transmitted a faith mixed with fear,” is called instead to free men and women from the fear of God like “the angels have done through sacred history.”

“Be angels who free (people) from fear,” Father Ronchi told the Vatican officials.

In the afternoon, Father Ronchi focused on the Bible passage from Jesus’ Sermon on the Mount in which he says, “You are the salt of the earth. But if salt loses its taste, with what can it be seasoned?”

The Servite priest told Vatican officials that the imagery of the salt, which dissipates in order to season, reflects the mission of a church that “gives of itself and melts away.”

“Salt and light are not intended to perpetuate themselves but to pour themselves out. And so it is with the church: It is not an end, but a means to make person’s life better and more beautiful,” he said.

Father Ronchi chose to reflect on the church’s mission to give a true witness to Jesus on the retreat’s third day March 8. Drawing from the Gospel reading on Peter’s profession of faith, the Italian theologian said Jesus’ question, “But who do you say that I am?” is a query that “digs into the soul.”

“The answer Jesus is looking for are not words. He is looking for people. Not definitions but engagements,” he said. “Jesus does not give lessons, he does not suggest answers; he gently leads you to look inside of yourself.”

Jesus’ question, he continued, is striking given that he “does not indoctrinate anyone” nor compels the disciples to give a “prepackaged response.” Peter’s answer that Christ “is the son of the living God” is a witness that “Christ is living within us.”

“Our heart can become either God’s cradle or his tomb,” he said.

Jesus’ ordering of the disciples “to tell no one that he was the Messiah,” Father Ronchi said, extends to the church, which sometimes has preached a “deformed” perception of God and is called to preach through their own personal witness.

“We clergy look all the same: the same gestures, words and clothes. But people are asking us to ‘Give me an experience of God.’ Jesus is not what I say of him but what I live from him. We are not mediators between God and humanity; the true mediator is Jesus,” he said.

NEXT: Toronto, Ottawa prelates call faithful to action against euthanasia