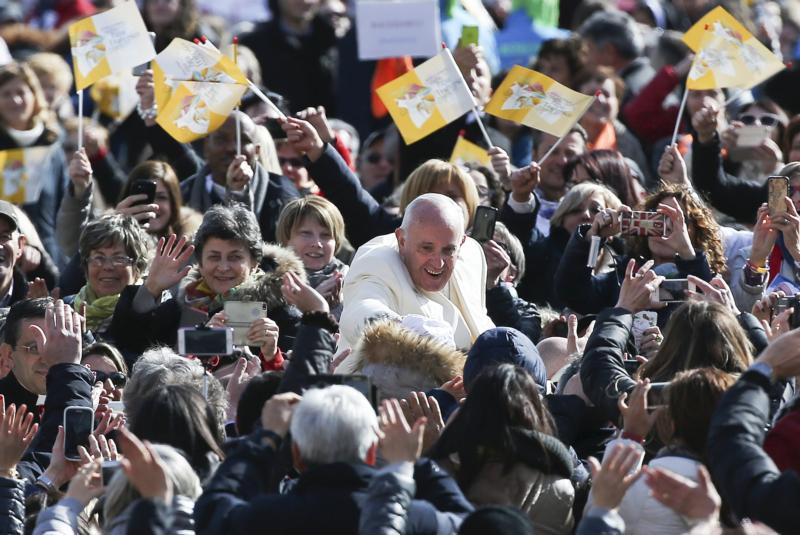 Pope Francis waves as he arrives to lead a jubilee audience in St. Peter's Square at the Vatican March 12. (CNS photo/Alessandro Bianchi, Reuters)

VATICAN CITY (CNS) — Serving others, helping them without making a show of it, “that’s amore,” Pope Francis said.

“Amore,” or love, “is the concrete service we render to one another,” the pope said March 12 during a special general audience for the Year of Mercy.

“Love isn’t words, but works and service, a humble service performed in silence” without seeking acclaim, the pope told tens of thousands of people gathered in St. Peter’s Square.

The audience began with the reading of St. John’s account of Jesus washing the disciples’ feet, which Pope Francis said was “an unexpected and moving gesture, so much so that Peter did not want to accept it.”

Jesus told the disciples that if he, their lord, washed their feet, they must do the same for others. “In this way Jesus indicates service as the path to follow if they want to live their faith in him and give witness to his love,” the pope said.

“Washing the apostles’ feet,” he said, “Jesus wanted to reveal the way God acts toward us and give an example of his new commandment of loving one another as he loved us, that is, by giving his life for us.”

Loving service also involves placing the gifts God has given one at the service of the community so it can grow, he said, but it also is expressed “in the sharing of material goods so that no one is in need.”

Members of other religions, he said, also see “this sharing and dedication to those in need” as a command of God and a path of true humanity.

“When you forget yourself and think of others, that’s love,” Pope Francis said. “And with the washing of feet, the Lord teaches us to be servants.”

To be “merciful like the Father,” which is the theme of the Year of Mercy, means “to follow Jesus on the path of service,” the pope said.

NEXT: Pope sends condolences after attack in Ivory Coast