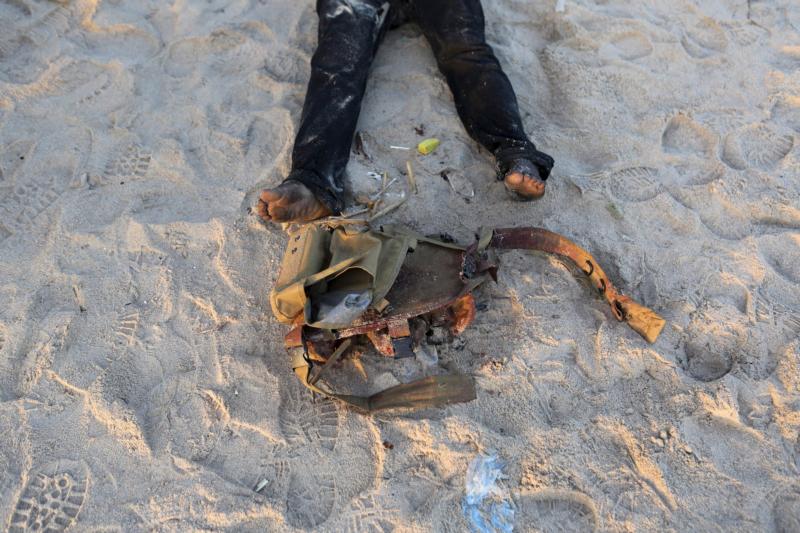 The feet and utility belt of what Ivory Coast security officers said was a dead attacker are seen on the beach in Grand Bassam March 13. In a message sent March 14 by Cardinal Pietro Parolin, Vatican secretary of state, to Bishop Raymond Ahoua of Grand-Bassam,Pope Francis condemned "violence and hatred in all its forms." (CNS photo/Joe Penney, Reuters)

VATICAN CITY (CNS) — Pope Francis sent condolences to the victims of a terrorist attack at a beach resort in Ivory Coast.

In a message sent March 14 by Cardinal Pietro Parolin, Vatican secretary of state, to Bishop Raymond Ahoua of Grand-Bassam, Ivory Coast, Pope Francis condemned “violence and hatred in all its forms.”

The pope “entrusts the victims to the mercy of God so that he may welcome them in his peace and light,” the cardinal wrote.

Father Zanou told Fides, news agency of the Congregation for the Evangelization of Peoples, that parishioners were having an outdoor procession when they first heard the shots and saw people running toward them, seeking cover. He said military forces arrived with about 50 people from the clash and ended up staying six-seven hours, until everyone was safe.

NEXT: Church must encourage couples who remain faithful, pope says