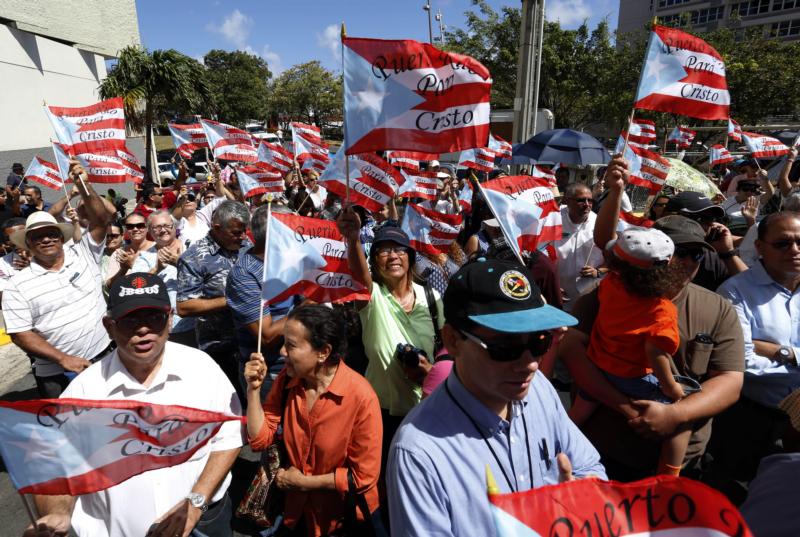 SAN JUAN, Puerto Rico (CNS) — Eight months after a huge celebration was held in Puerto Rico last July, when the U.S. Supreme Court approved same-sex marriages with its ruling in Obergefell v. Hodges, a federal district court ruled the high court’s decision did not apply to this jurisdiction.

“The court concludes that the fundamental right to marry, as recognized by the Supreme Court in Obergefell, has not been incorporated to the juridical reality of Puerto Rico,” concluded the ruling signed by U.S. District Judge Juan M. Perez Gimenez March 8.

His decree came two years after a complaint was filed by members of the lesbian, gay, bisexual and transgender community against Puerto Rico Gov. Alejandro Garcia Padilla. They claimed the local civil code’s definition of matrimony — as between one man and one woman — was unconstitutional, based on the 14th Amendment’s Equal Protection and Due Process clauses.

The local federal court granted the governor’s motion to dismiss the claim “for failure to present a substantial federal question,” prompting an appeal. The case was vacated by the U.S. Court of Appeals for the 1st Circuit, which is based in Boston and includes Puerto Rico, and was remanded “for further consideration in light of Obergefell v. Hodges.”

Upon the Supreme Court’s decision on the Obergefell case last June, Garcia Padilla immediately ordered government agencies to comply with the federal ruling and start issuing marriage licenses to same-sex couples. The current ruling on the appealed case came as a shock to many islanders on both sides of the same-sex marriage issue.

Once again, the issue of Puerto Rico’s political status is the key element for a federal case decision, this time based on two doctrines — of selective incorporation and territorial incorporation.

According to Perez Gimenez, in reference to the 14th Amendment of the U.S. Constitution, although originally applied only to states and not to individuals, “the Supreme Court began using that amendment’s Due Process Clause to (selectively) ‘incorporate’ a number of the individual liberties found in the first 10 amendments.”

However, the judge made a clear distinction between states and territories: “Notwithstanding, the incorporation of fundamental rights to Puerto Rico through the 14th Amendment, unlike the States, is not automatic,” he wrote.

“Thus, the court declines to hold that the marriage ban codified in … the civil code violates the Due Process and the Equal Protection clauses of the 14th Amendment by denying same-sex couples in Puerto Rico the right to marry or to have marriages validly performed in another jurisdiction given full recognition,” added the judge.

“I will respect what has been determined by higher hierarchy courts that, fortunately, order a very different procedure,” the governor said in a March 9 press release. “The fundamental right to equal marriage has been validated and ordered by the federal Supreme Court and by the appeals court in Boston.”

Local church officials did not have an immediate reaction to the federal district court’s ruling. However, Archbishop Roberto Gonzalez Nieves of San Juan had expressed his views on the issue in an undated news release issued by the Puerto Rican bishops’ conference.

“Marriage and family are not the makings of governors or judges, but of the consciousness of early beings of the human species who populated Earth after a long and millenary evolution process,” he wrote.

He also had called for a referendum on same-sex marriage to counter what he saw as a “dictatorial imposition on the state’s part,” referring to the government’s support of it.

“We want a society that welcomes, accompanies, loves and protects the legitimate rights of its homosexual, lesbian, bisexual, transsexual and transgender sons and daughters,” he said. “This does not justify their union being analogous to man-woman marriage, the only union able to pass on life and to reflect the Creator’s will.”

Some local political analysts have proposed that Perez Gimenez might be attempting to force the Supreme Court to clarify once and for all how extensive is Puerto Rico’s sovereignty.

“One might be tempted to assume that the constant reference made to the ‘States’ in Obergefell includes the Commonwealth of Puerto Rico. Yet, it is not the role of this court to venture into such an interpretation,” wrote the judge.

NEXT: Philippine cardinal challenges Asians to become church of the poor