Mobile app seeks to connect people around the world through prayer 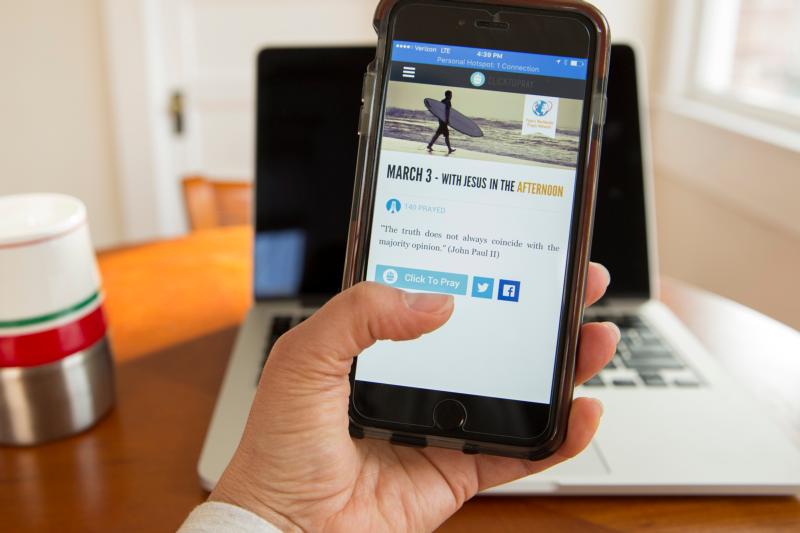 The Click to Pray mobile app aims to connect people around the world to pray for the pope's monthly intentions. (CNS photo/Nancy Wiechec)

VATICAN CITY (CNS) — The Apostleship of Prayer has created a mobile app — Click to Pray — that aims to connect people around the world to pray for the pope’s monthly intentions.

The app was created as part of the re-launch of the Apostleship of Prayer, the Jesuit-run outreach that has given Catholics the pope’s monthly prayer intentions since 1890.

In an interview with Vatican Radio, Jesuit Father Frederic Fornos, international director of the apostleship, said the app responds to Pope Francis’ message for World Communications Day 2016, which stresses the power that modern means of communications have to build bridges between people.

“The app accompanies you throughout your day. It connects you with thousands of people who find purpose in praying every day for the challenges of humanity and for the mission of the church as the pope proposes in his monthly prayer intentions,” according to the Click to Pray website.

The app allows the user to choose three times throughout the day to receive prayers. “You set the time you want to start your day in the morning. You select another moment during the day to receive an inspirational thought. And, finally, you select a moment in the evening to close your day with a daily review,” the website said.

Vatican Radio reported that users also can opt to receive notifications to remind them to pray, and the app offers the option of writing one’s own intention or prayer.

The app is the second new media feature to be rolled out this year by Apostleship of Prayer. Working with the Vatican Television Center, it also began a video series in January featuring Pope Francis discussing his universal prayer intention. The monthly videos are uploaded on Facebook, Twitter, Instagram and YouTube on the first Friday of each month.

While the pope speaks in Spanish, the videos have subtitles for 10 languages, Father Fornos told Vatican Radio in January.

In a later interview about the app, Father Fornos said Pope Francis had told Father Adolfo Nicolas, the Jesuit superior general, that he is “very happy with the re-foundation, re-creation of the worldwide network of the Apostleship of Prayer and with the fact that in this Year of Mercy it can help people pray in communion with him.”

The Click to Pray app is available for iPhone, Android and Windows, and the prayers also can be found at clicktopray.org.