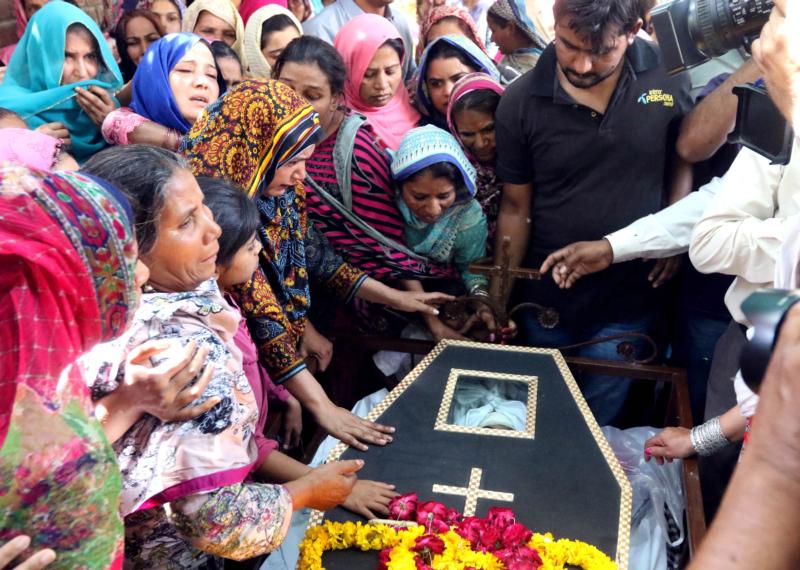 People react over the coffin of a victim March 28 a day after a suicide bomb attack at a park in Lahore, Pakistan. Pope Francis appealed to the government of Pakistan to take steps to ensure the safety of the country's Christians and other minorities. (CNS photo/Rahat Dar, EPA)

UPDATED – VATICAN CITY (CNS) — Pope Francis appealed to the government of Pakistan to take steps to ensure the safety of the country’s Christians and other minorities the day after a terrorist bombing killed at least 70 people and injured more than 300 who were spending Easter afternoon in a public park.

Concerning the attack in Lahore, Pakistan, the pope said, “Easter was bloodied by a hideous attack, which massacred many innocent people, mostly families belonging to the Christian minority — especially women and children — who were in a public park joyfully celebrating the Easter holiday.”

After reciting the “Regina Coeli” prayer with pilgrims gathered in St. Peter’s Square March 28, the pope condemned the Lahore attack as a “cowardly and senseless crime.” Jamaat-ul-Ahrar, a splinter group of the Taliban, said it carried out the attack and specifically targeted Christians celebrating Easter.

Pope Francis appealed to “the civil authorities and all community leaders in that nation to do everything possible to ensure the security and serenity of the population, particularly the most vulnerable religious minorities.”

“Violence and homicidal hatred lead only to pain and destruction; respect and brotherhood are the only paths that lead to peace,” he said.

Before leading the crowd in reciting the “Hail Mary” for the victims and their families, Pope Francis asked the people in St. Peter’s Square to pray that God “would stop the hand of the violent, who sow terror and death, and that in the world there may reign love, justice and reconciliation.”

In his main address, and again after leading the “Regina Coeli” prayer, the pope spoke about the importance of making a real effort to live with the hope the Resurrection should bring.

“Life has vanquished death. Mercy and love have vanquished sin,” the pope said.

“We know that faith and hope are a gift of God and we must ask for it: ‘Lord, give me faith, give me hope. We need it so much,'” he said.

Before asking people to pray for him, the pope led the crowd in repeating three times, “Christ, my hope, is risen.”

“Even as Christians celebrated the peace of the risen Lord, they became victims of the most atrocious violence,” Archbishop Kurtz said in a letter to Archbishop Joseph Coutts, president of the Pakistan Catholic Bishops’ Conference. “There are simply no words that can fully capture the immeasurable horror of seeing a children’s playground turned into a place of slaughter.”

He echoed Pope Francis’ solidarity with Pakistani Christians, adding, “our unity with you will never tire in the face of evil.”

NEXT: Reconcile with God, resurrect hope in others, pope urges at Easter