Reconcile with God, resurrect hope in others, pope urges at Easter 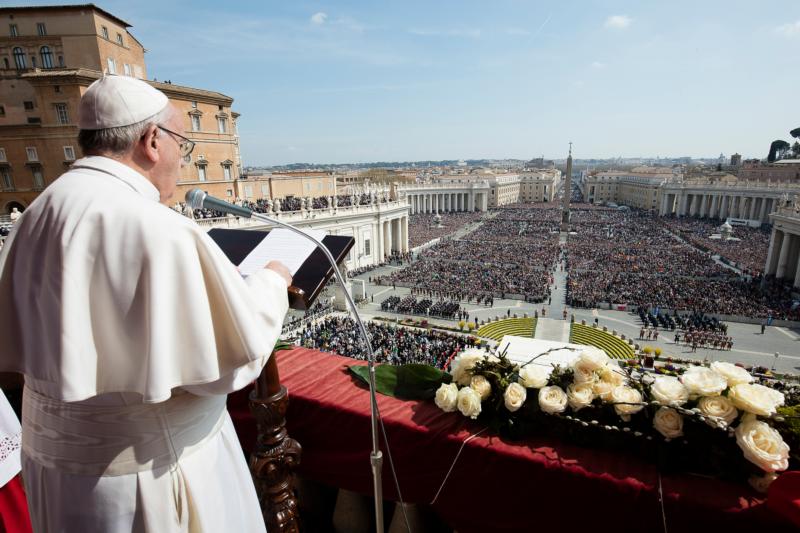 Pope Francis delivers his Easter message "urbi et orbi" (to the city and the world) from the central balcony of St. Peter's Basilica at the Vatican March 27. (CNS photo/L'Osservatore Romano, handout)

VATICAN CITY (CNS) — Easter is a feast of hope, a celebration of God’s mercy and a call to pray for and assist all who suffer, Pope Francis said before giving his solemn blessing “urbi et orbi” (to the city and the world).

The risen Jesus “makes us sharers of his immortal life and enables us to see with his eyes of love and compassion those who hunger and thirst, strangers and prisoners, the marginalized and the outcast, the victims of oppression and violence,” the pope said March 27 after celebrating Easter morning Mass.

Easter in Rome dawned bright and sunny; in St. Peter’s Square, the steps leading up to the basilica were turned into an abundant garden with thousands of tulips, daffodils and flowering bushes.

On Easter morning, the pope does not give a homily. Instead, with hands clasped in prayer and head bowed, he led the tens of thousands of people in the square in silent reflection.

After Mass, before giving his solemn blessing, Pope Francis said Easter should give people the courage to “blaze trails of reconciliation with God and with all our brothers and sisters.”

Speaking about Christ’s power over death and sin, the pope prayed that the Lord would touch places in the globe scarred by war, terrorism, poverty and environmental destruction.

“The risen Christ points out paths of hope to beloved Syria, a country torn by a lengthy conflict, with its sad wake of destruction, death, contempt for humanitarian law and the breakdown of civil concord,” the pope said. “To the power of the risen Lord we entrust the talks now in course.”

He prayed that the power of the Resurrection would “overcome hardened hearts and promote a fruitful encounter of peoples and cultures,” particularly in Iraq, Yemen, Libya and the Holy Land. 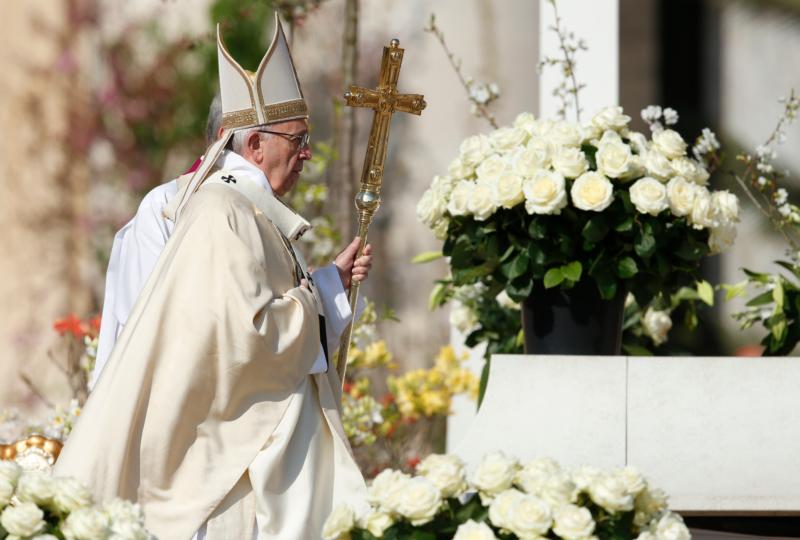 “May the Lord of life also accompany efforts to attain a definitive solution to the war in Ukraine, inspiring and sustaining initiatives of humanitarian aid, including the liberation of those who are detained,” he prayed.

On Easter and throughout the Holy Week liturgies that preceded it, Pope Francis showed special concern for the fate of refugees and migrants fleeing violence and poverty and for Christians facing persecution in the Middle East and other parts of the world.

At Rome’s Colosseum Good Friday, after presiding over the Stations of the Cross, the pope offered a long meditation on how Christ continues to be scorned, tortured and crucified in suffering people around the world.

“O Cross of Christ,” he said March 25, “today too we see you raised up in our sisters and brothers killed, burned alive, throats slit and decapitated by barbarous blades amid cowardly silence.”

“O Cross of Christ, today too we see you in the faces of children, of women and people, worn out and fearful, who flee from war and violence and who often only find death and many Pilates who wash their hands,” he said.

Two days later, celebrating the Resurrection, Pope Francis said the Easter message “invites us not to forget those men and women seeking a better future, an ever more numerous throng of migrants and refugees — including many children — fleeing from war, hunger, poverty and social injustice. All too often, these brothers and sisters of ours meet along the way death or, in any event, rejection by those who could offer them welcome and assistance.”

Celebrating the Easter vigil March 26, Pope Francis said Easter is a celebration of hope, one that must begin within the hearts of each Christian.

“Christ wants to come and take us by the hand to bring us out of our anguish,” he said in his homily. “This is the first stone to be moved aside this night: the lack of hope which imprisons us within ourselves. May the Lord free us from this trap, from being Christians without hope, who live as if the Lord were not risen, as if our problems were the center of our lives.

“The Lord is alive and wants to be sought among the living,” Pope Francis said. “After having found him, each person is sent out by him to announce the Easter message, to awaken and resurrect hope in hearts burdened by sadness, in those who struggle to find meaning in life. This is so necessary today.”

During the Easter vigil, Pope Francis baptized eight women and four men, including Yong-joon Lee, the South Korean ambassador to Italy, who took the baptismal name, Stephen. The ambassador’s wife, taking the name Stella, was also baptized. The other catechumens came from Italy, Albania, Cameroon, India and China.

One by one, the catechumens approached the pope who asked them if they wished to receive baptism. After responding, “Yes, I do,” they lowered their heads as the pope, using a silver shell, poured water over their foreheads.

Confirming the 12 during the vigil, the pope asked the cardinals, bishops and priests present to join him in raising their hands and praying over the newly-baptized so that God would send forth the Holy Spirit upon them.

At the beginning of the vigil, after blessing the Easter fire, Pope Francis entered a darkened basilica, gently illuminated by the light of the Easter candle.

In his homily, reflecting on the Easter account from the Gospel of St. Luke, the pope noted how the disciples doubted the testimony of the women returning from the empty tomb.

Peter, he said, was the first of the men to rise and run to the tomb, choosing not to “succumb to the somber atmosphere of those days, nor was he overwhelmed by his doubts.”

“This marked the beginning of Peter’s resurrection, the resurrection of his heart. Without giving in to sadness or darkness, he made room for hope; he allowed the light of God to enter into his heart, without smothering it,” the pope said.

Like Peter and the women, he added, Christians cannot discover life by being “bereft of hope” and “imprisoned within ourselves” but, instead, must allow Christ to bring life and break open their tombs, sealed by “the stones of our rancor and the boulders of our past.”

While problems will always remain, he said, Jesus’ resurrection is a sure foundation of Christian hope and not “mere optimism, nor a psychological attitude or desire to be courageous.”

The Holy Spirit “does not remove evil with a magic wand. But he pours into us the vitality of life, which is not the absence of problems, but the certainty of being loved and always forgiven by Christ, who for us has conquered sin, death and fear,” he said.

Christians are called to awaken the same hope in the hearts of others, Pope Francis said. Without such witness the church risks becoming “an international organization full of followers and good rules, yet incapable of offering the hope for which the world longs.”

NEXT: Some West Bank Christians don’t get Easter permits to enter Jerusalem