Pope’s Via Crucis: Cardinal writes prayers for all those who suffer 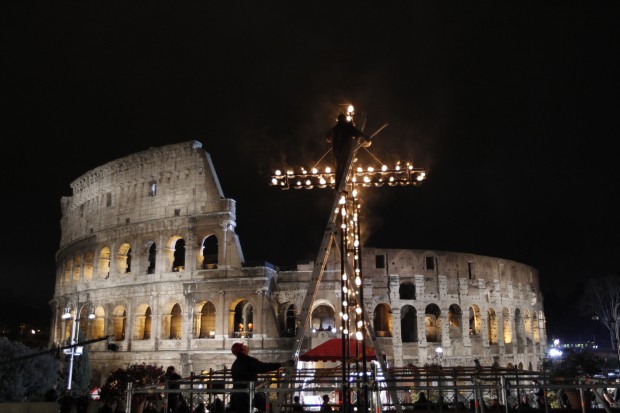 A worker lights torches on a cross outside Rome's ancient Colosseum before Pope Francis leads his first Good Friday Way of the Cross as pope March 29, 2013. (CNS photo/Paul Haring)

VATICAN CITY (CNS) — When he told Pope Francis that writing the meditations for the papal Way of the Cross service was tough, Cardinal Gualtiero Bassetti of Perugia-Citta della Pieve said the pope told him, “Remember, you aren’t doing it for me, but for the church.”

The Good Friday service, which takes places at night at Rome’s Colosseum, is broadcast around the world. Tens of thousands of people gather with the pope around the ancient Roman amphitheater to meditate on the last moments of Jesus’ life.

Each year the pope asks a different person to write the meditations and prayers that are read out after each station is announced. Cardinal Bassetti was chosen for the March 25 service.

“For every station I tried to make a reference to current events because, as Pope Francis says, ‘God is real and shows himself today,'” the cardinal told the Vatican newspaper, L’Osservatore Romano.

Reflecting on Christ’s passion, the cardinal also urged people to reflect on how human sin and suffering continue today. His meditations refer to modern martyrs being killed “in every corner of the globe” just because they are Christians. He refers to the suffering of migrants and refugees fleeing poverty and persecution but risking disease and death as they make the perilous journey toward a new life.

“Without a doubt, though, it was most difficult to write about violence against children,” both those reduced to slavery in forced work and those abused by adults, he said. “When I wrote those lines I felt like I was not using a pen on paper, but a chisel on marble, such was the suffering in writing about those plagues.”

Reading and praying about the stations in preparation for writing, the cardinal said he was struck particularly by portrayals of the use and abuse of power.

In the first station, “Jesus is condemned to death,” Pilate has political power and can “give or take a life according to his own interests,” he said. In the fourth station, “Jesus meets his mother,” one sees the power love has to give life; and the 11th station, “Jesus is nailed to the cross,” illustrates divine power in “the ability of the Lord to open the path to eternal life when human eyes see only death and humiliation.”

Standing before Pilate, the cardinal wrote in the first station, “Jesus is alone before the power of this world. And he submits to human justice completely.”

Pilate and the crowds — including men and women today — hand him over to be crucified, he wrote. They are “dominated by a sensation that is common to all people: fear — the fear of losing their security, their goods, their lives.”

The Vatican publishing house, Libreria Editrice Vaticana, printed booklets with the complete texts of the prayers and meditations. They were to be handed out free of charge to people joining the pope at the Colosseum and available for sale at the Vatican bookstore.

By participating in the Via Crucis service and remembering Christ’s passion, Christians assert their faith that suffering is not absurd and that, in the end, Christ is victorious over both evil and death, Cardinal Bassetti told L’Osservatore Romano.

At the same time, he said, it means “recognizing that in our daily crosses, Jesus is with us.”

Most of the cardinal’s meditations and prayers were designed to help Catholics recognize how much they need God’s mercy, the great cost paid by Jesus for their salvation and how Christ continues to suffer today in the lives of so many people.

In his meditation for the third station, “Jesus falls for the first time,” Cardinal Bassetti asks a question countless have asked throughout history, “Where is God?”

Cardinal Bassetti’s prayer for that station is “for all those situations of suffering that seem to have no sense,” including for “Christians killed in hatred of the faith, for victims of every kind of persecution, for children who are slaves, for the innocent who die in wars.”

The prayers for the seventh and ninth stations, when Jesus falls again, are likewise prayers for lists of people who find themselves thrown or pushed down to the ground under the weight of almost unbearable suffering: abused women, orphans, those whose families have broken up and the unemployed.

For the 13th station, “Jesus is taken down from the cross,” the cardinal focuses on Joseph of Arimathea who requested permission to bury Jesus. Taking Jesus while he is still “a loser,” Joseph of Arimathea shows “the strength of faith, a faith that becomes acceptance, gratuity and love. In a word: charity.”

PREVIOUS: As crowds were indifferent to Jesus’ passion, so with today’s migrants, pope says