Suffering of innocent can make it difficult to trust God, pope says 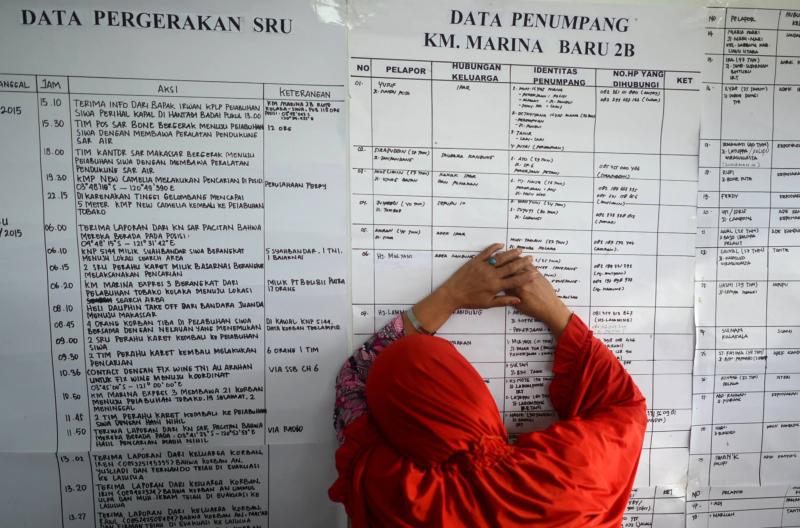 An Indonesian woman cries as she checks the passengers list of a capsized ferry at a crisis center in Siwa, Indonesia, in this Dec. 21, 2015, file photo. (CNS photo/Stringer, EPA)

VATICAN CITY (CNS) — The suffering of the homeless, the plight of refugees and the persecution of Christians, such as the four Missionaries of Charity murdered in Yemen, are events that can make it difficult for Christians to have faith and trust in God, Pope Francis said at his morning Mass.

“You see these four slaughtered nuns: They served out of love and ended up slaughtered out of hate! When you see the doors closed to refugees and they are left outside, out in the open and in the cold, (we ask): ‘But, Lord, where are you?'” the pope said March 14 during the Mass in the chapel of Domus Sanctae Marthae.

The pope focused his homily on the day’s first reading from the Book of Daniel, in which Susanna, a righteous woman, is falsely accused of adultery and unjustly sentenced to death before being proven innocent by the prophet Daniel.

Like Susanna, who called out to God when she was being led to her execution, the pope said it is easy to question God when facing moments of injustice and difficulty, especially when seeing “so many people who die of hunger, of war, so many disabled children.”

“‘How can I trust in you when I see all these things?'” people ask, the pope said. “And when things happen to me, each one of us can say: ‘But how can I trust you?’ There is only answer to this question: It cannot be explained, even I am not able to explain it.”

Pope Francis said Jesus’ words in the Garden of Gethsemane, in which he “entrusts himself to the will of the father,” illustrates that “everything doesn’t end in death or in anguish.” To trust and believe that “God walks with me,” he said, is an act of faith.

Prayer, he added, is important in order to learn how to trust in God, “even in the difficult moments, in dark times and at the moment of death.”

Pope Francis cited the death of Boris, a homeless man from Poland who died two weeks ago on the main street that leads to St. Peter’s. The homeless man’s funeral was held in a nearby church March 12 and his friends were offered lunch by the pope after the celebration.

Boris, the pope said, “died in the cold and in the midst of Rome, a city with all the possibilities to help.”

“It would do us well today to think about our life, about the problems we have and ask for the grace to entrust ourselves to God’s hands,” he said. “Think about so many people who don’t even have a last caress at the moment of death.”

NEXT: UNICEF official warns no place is safe for Syria’s children