UNICEF official warns no place is safe for Syria’s children 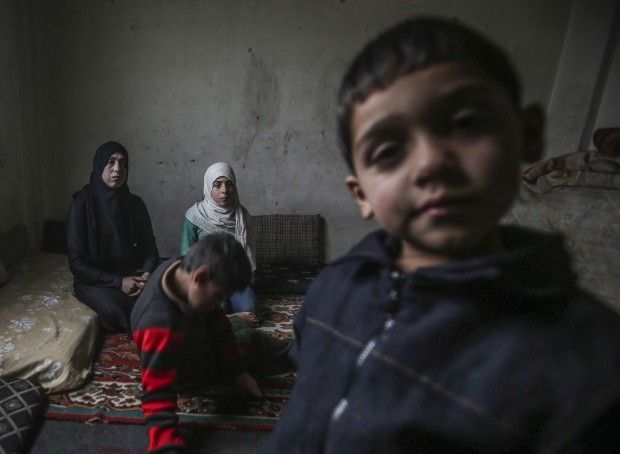 A child poses for a photo with his family in Al-Qaboon, Syria, Feb. 22. His father disappeared four years ago in the ongoing conflict. (CNS photo/Mohammed Badra, EPA)

AMMAN, Jordan (CNS) — As peace talks get underway in Geneva trying to end the 5-year-old war in Syria, the U.N. children’s agency warned that more than 80 percent of Syria’s children have been harmed by the destructive conflict.

“No place today is safe for Syria’s children,” Peter Salama, UNICEF’s Mideast director, told reporters in the Jordanian capital at the launch of the organization’s latest report on the Syrian crisis.

“A new and disturbing pattern of violations against children’s rights has emerged in the conflict,” Salama said, as youngsters have been killed and maimed, boys under age 15 have been forced into active combat, while still others have been exposed to siege and starvation.

Nearly 7 million children in Syria live in poverty and are potential targets for recruitment by armed groups, Salama warned. UNICEF has called for the unconditional and sustained access to children in Syria, including 2 million in besieged areas.

“This generation is at grave risk. Almost 3 million of these children are out of school,” Salama said. “If we don’t have them educated, we won’t have the next generation of people to rebuild Syria.”

A 12-year-old Syrian named Saja told UNICEF that she is trying to educate herself by reading, but she does not always understand everything in her books. She lost one of her legs in a bombing that killed several of her friends.

“It’s a struggle, but what can I do,” she said. Despite her handicap, Saja hopes to train as a gymnastics coach and plays soccer using crutches.

Meanwhile, Catholic Relief Services reports that it has supported more than 1 million people affected by the Syrian conflict, mainly sheltering in neighboring countries such as Jordan, Turkey and Lebanon.

“The scale of the suffering is devastating,” said Kevin Hartigan, CRS regional director for Europe and the Middle East, who has overseen the response. “But as Pope Francis reminds us, there are human faces behind the staggering statistics. Each of the millions of displaced Syrians is an individual uprooted from a full life, a family member, a loved one.”

CRS, the U.S. bishops’ international relief and development agency and a member of the international Caritas aid federation, has made education a priority for Syrian refugee children who have fled the conflict.

CRS and Caritas have set up education facilities for refugee children and have introduced a certification process that will allow them to return to their education system in Syria when the war is over. These Catholic aid agencies also have provided psycho-social support and trauma healing to children exposed to the horrors of seeing loved ones killed and their homes destroyed. In addition to this support, food, clothing and medical care have been supplied to refugee children and their families.

The Catholic agencies and the U.N. have called for an end to attacks on civilian infrastructure in Syria so that schools, hospitals and water supplies are kept safe. They also urge the immediate lifting of all sieges by all parties to the conflict.

Hind Kabawat, a Syrian Christian lawyer who attended the Geneva talks, told CNS that it’s up to Syrian people to decide whether to keep Syrian President Bashar Assad. Assad’s fate, presidential elections and the type of new government are among the talks’ main obstacles. The Syrian regime says Assad’s future is not on the table.

“The Syrian people have the right to decide if they want to keep Bashar Assad or not. When we have somebody who has committed all of these crimes in Syria, I don’t think he is qualified to be a president,” said Kabawat, formerly with the U.S. Institute of Peace.

“We have to live in hope. This is the only thing we can do now,” she said. “We don’t have other options. The other option is war, which is death to Syrian people.”

PREVIOUS: Suffering of innocent can make it difficult to trust God, pope says

NEXT: ‘VatiLeaks’ trial resumes at Vatican