A ministry of mercy tackles suicide epidemic on Lakota reservation 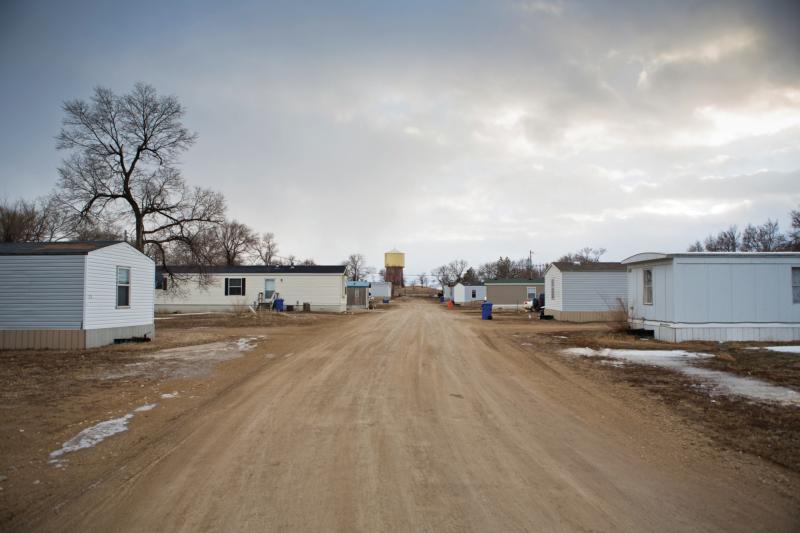 Homes line a dirt road in 2013 on the Rosebud Reservation in south central South Dakota. Poverty and addiction are major contributing factors to the high suicide rate on the Lakota reservation. (CNS photo/Rich Kalonick, Catholic Extension) 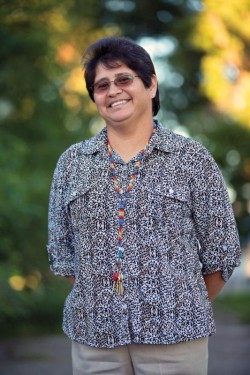 Geraldine Provencial, director of the suicide and crisis hotline started by St. Francis Mission in South Dakota, pictured in a late July photo. She says her ministry is providing the “last grasp of hope” for those in crisis served by the mission, a Jesuit ministry on the Rosebud Reservation. (CNS photo/Rich Kalonick, Catholic Extension)

ROSEBUD, S.D. (CNS) — A sad reality on a number of Native American reservations is the high suicide rate. That is especially true on the Rosebud Reservation in south central South Dakota.

In 2007 — at the height of an ongoing suicide epidemic — the number of deaths by suicide on Rosebud was roughly 13 times the national average, making it, according to one report, the highest in the world.

To help address this crisis, St. Francis Mission, a Jesuit ministry on this Lakota reservation, has started a suicide and crisis hotline.

For Geraldine Provencial, its director, her work has a strong personal motivation: “What inspires me to work with the suicide and crisis hotline is the experience I have had with suicides in my own immediate family. I lost a sister to suicide, a brother to suicide and my grandson’s mother to suicide, which has resulted in my taking care of my grandson today, who is 11 years old. He is my inspiration.”

Not having had support when she herself had to deal with these suicides is what spurs Provencial today to reach out to others on the reservation who are experiencing these difficulties.

“To work with this type of program takes courage because there is a lot of sadness that is part of the suicide crisis,” she told Catholic Extension magazine. “The hurt and pain that people are carrying within themselves does not go away when they take their lives. The pain just gets passed on to us family members, and we feel that for the rest of our lives.”

She relies on her faith to carry her through and help her find hope, so that, in turn, she can help others and “be there for them when those kinds of thoughts cross their minds.” She also has found that “faith is a huge piece in people’s recovery and helps them to find what they are seeking. The Catholic faith can give a person something they can lean on to find direction in their lives and better their lives.”

On the 24/7 hotline, she and her trained volunteers talk both with individuals who are contemplating suicide and with family members concerned that someone may be thinking about ending his or her life. “The hotline is providing that last grasp of hope. Some of the individuals will ask for prayers for strength to help them get through their most difficult time, which is part of the reason why they reach out to us.”

In emergency situations, “the main priority is to keep the person on the line and talking. This could mean being on the phone for a couple of hours,” she said. The responders work to identify the caller’s location and to get the tribal police to get him or her to the local Indian Health Services emergency room for mental health and support services.

“When people in crisis call,” Provencial said, “we never know what type of call it is going to be. Some of the callers just need someone to listen to them.”

Provencial also directs the Icimani Ya Waste’ (Lakota for “Good journey”) Recovery Center, where she facilitates a monthly, four-day program to tackle the family dynamics involved in addiction and holds recovery-related meetings and 12-step programs.

Drug and alcohol abuse, 10 times the national rate, is a major contributing factor to the reservation’s high suicide rate, and both are rooted in a larger bleak socioeconomic reality. The Rosebud Reservation has one of the highest unemployment rates in the country —  about 83 percent — and Todd County, where Rosebud is located, is the third poorest county in the United States. Domestic violence, sexual assault and gang violence also have been identified as major factors contributing to despair and suicide on the reservation.

Provencial is part of the first group of people whose salary Chicago-based Catholic Extension is helping to pay through a new Health Ministry Salary Subsidy Initiative. Started last fall, the initiative was made possible by an anonymous gift from a foundation.

According to its president, Jesuit Father John Hatcher, the mission’s strong focus on healing ministries has come from asking the question, “Where are people hurting, and how can the church minister to them?” Addressing alcoholism and the suicide epidemic are top priorities.

“Through the hotline, we’ve been able to intervene with people who are in extreme danger of killing or hurting themselves or being hurt by someone else,” Father Hatcher said. “Once we’ve sent out emergency vehicles, we can follow up with them and continue the healing.”

NEXT: For Catholic astronauts, flying to space doesn’t mean giving up the faith