For Catholic astronauts, flying to space doesn’t mean giving up the faith 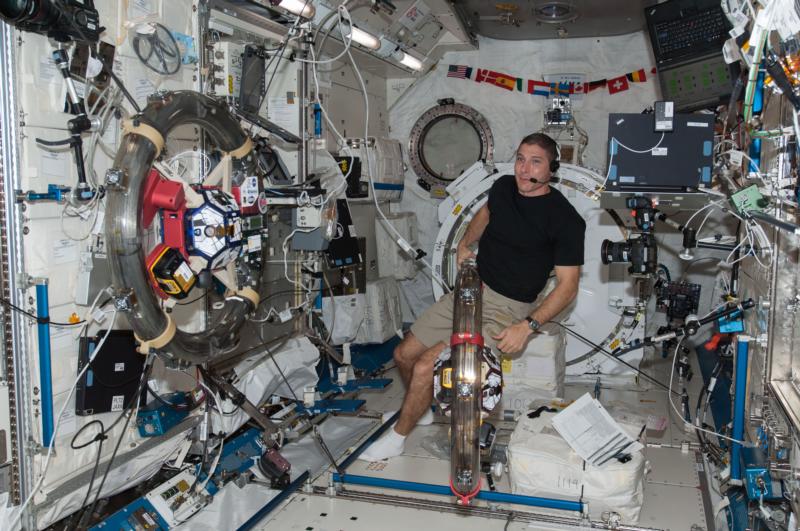 Astronaut Mike Hopkins works with a pair of free-flying satellites in the International Space Station's Kibo laboratory Nov. 4, 2013. Hopkins was able to observe his Catholic faith through prayer and taking holy Communion throughout his flight. (CNS photo/courtesy NASA)

WASHINGTON (CNS) — On the International Space Station there’s a place, while filled with robotic equipment, where astronauts like to hang out. Called the Cupola, the small module has seven large bay windows that give crew members a panoramic view of Earth.

On his first — and thus far only — mission into space in September 2013, astronaut Mike Hopkins was eager to find the Cupola. What he saw he found amazing.

“When you see the Earth from that vantage point and see all the natural beauty that exists, it’s hard not to sit there and realize there has to be a higher power that has made this,” said Hopkins, who is Catholic.

It was in the Cupola that Hopkins found himself praying and at times taking Communion.

Under a special arrangement with the Archdiocese of Galveston-Houston and with the help of Father James H. Kuczynski, pastor of Mary Queen Catholic Church in Friendswood, Texas, Hopkins’ parish, the rookie astronaut carried a pyx with six consecrated hosts broken into four pieces. It was enough so that he could take Communion once a week for the 24 weeks he was aboard the ISS.

“It was extremely, extremely important to me,” said Hopkins, now 47, who grew up on a farm outside of Richland, Missouri, in a United Methodist family but completed Rite of Christian Initiation of Adults classes and became Catholic just before going into space.

He said he wanted to become Catholic not just because his wife and two teenage sons were Catholic but because “I felt something was missing in my life.”

Hopkins completed two spacewalks to change out a pump module with fellow spacefarer Rick Mastracchio. Before exiting the ISS, he took Communion as well.

“Those events can be stressful events,” he told Catholic News Service from his office in Houston. “Knowing Jesus was with me when I stepped out the door into the vacuum of space was important to me.”

Such practices of faith, especially among Catholics in the astronaut corps, is hardly unusual. In 1994, astronauts Sid Gutierrez, Thomas Jones and Kevin Chilton, an extraordinary minister of holy Communion, celebrated a Communion service on the shuttle flight deck 125 miles above the Pacific Ocean.

And long before the trio carried out their service, Frank Borman, aboard Apollo 8 orbiting the moon on Christmas Eve in 1968, read from the Book of Genesis in perhaps one of the most memorable broadcasts in U.S. space history. Seven months later, Buzz Aldrin, an elder in his Presbyterian church in Houston, celebrated a communion service for himself after landing on the moon using a kit provided by his church.

Devout Muslim astronauts follow National Fatwa Council guidelines developed in 2007 that define permissible modifications to traditional rituals such as kneeling during prayer, facing Mecca when praying, and washing. Israeli astronaut Ilan Ramon, who died during re-entry aboard the shuttle Columbia in 2003 when it broke up over Texas and Louisiana16 minutes prior to landing, carried a microfiche Bible given to him by Israel’s president and had copied the traditional Jewish blessing Shabbat Kiddush into his diary so he could recite it, according to media reports.

On long-term missions to the ISS, schedules give astronauts blocks of private time daily, allowing them to pray, read the Bible or other inspirational works, write in a journal or reflect on God. Hopkins used some of his time to keep up with the Sunday readings and his pastor’s weekly homily, both of which he received via email from the support person for his family assigned by NASA who was a member of his parish and take Communion.

“My crewmates knew I had the Eucharist with me,” Hopkins said. “In fact, I coordinated with my Russian commander. He knew everything going on. They were all aware of that, but I never tried to make a large deal about it and publicize it and they didn’t either. They respected my faith and my desire to follow that faith even when I was in orbit.”

Astronaut Mike Good, a member of St. Paul the Apostle Parish in Nassau Bay, Texas, near NASA’s Johnson Space Center, and a veteran of two space flights, spent about 12 days on each of his missions aboard the space shuttle. Taking Communion into space, he said, was not as imperative.

“But if I was going to do a six-month expedition on the ISS, I would talk to my priest and figure out what we were going to do,” Good said.

From another perspective, Good, 53, and retired astronaut Mike Massimino, 54, told CNS that the opportunity to fly in space offered time to reflect on creation as they gazed upon the spaceship called Earth.

“One thought I had is that God must love us to give us such a beautiful home,” Massimino said. “It’s given me a view of the planet of how special it is and how loved we are to have such a great place and how we should appreciate it.”

Good, Massimino’s spacewalk partner on a 2009 shuttle mission servicing the Hubble Space Telescope, said he felt blessed to see the planet from high above.

“Looking back at the Earth, I can’t really describe how beautiful it is from 300 miles up,” Good said. “Looking down, you can tell it’s a planet. The sky is black. There’s just a thin blue ribbon, what we see as blue sky on Earth. You realize how small it is and how fragile the planet is.

“It just makes it so obvious that God created this beautiful place. The word awe just comes to mind. … And looking out into space, it’s just a clear view. The stars don’t twinkle. It’s like a high definition 3-D TV. You look out into space and feel very small.”

Both men acknowledged that flying into space is dangerous and they prepared before their missions by participating in the sacrament of reconciliation. “You try to be in as good a state as you can because it’s a dangerous event you’re going to partake in,” said Massimino, who also flew on a shuttle mission to Hubble in 2002.

Good, a graduate of the University of Notre Dame, expects that when the moment of launch comes, there’s a feeling of connection with God or a higher power among just about everyone heading to space.

NASA and Roscosmos, the Russian space agency, allow astronauts to take a little more than 3 pounds of personal items into space. Some of the Catholics who have flown have taken crucifixes, prayer cards, icons and other religious objects with them.

Among the things Massimino took on his first flight was a Vatican City flag, which he later gave to St. John Paul II. On his second flight, he took a prayer card depicting Pope Benedict XVI, which he gave to the pontiff.

Hopkins, Good and Massimino took mementos, including religious items, from their schools, parishes and friends into space.

One Catholic astronaut, Mark Vande Hei, 49, is preparing for his first mission to the ISS next March. He said he has talked a bit with his Catholic colleagues about what to expect. The next 11 months will be particularly busy as he trains in Japan, around the U.S. and at the Russian-leased Baikonur cosmodrome in Kazakhstan. For now, his spiritual preparation remains the same with daily prayer and regular Mass attendance at St. Paul the Apostle Church in Nassau Bay.

“I pray the rosary while walking the dog,” he added.

To keep astronauts’ spirits high, NASA arranges for occasional calls with celebrities on flights and asks each astronaut with whom they might like to talk. Vande Hei, who holds a bachelor’s degree in physics from St. John’s University in Minnesota, said he suggested Pope Francis.

His request may not be outside the realm of possibility. Pope Benedict communicated with the crew aboard the ISS in May 2011 in a 20-minute conversation.

NEXT: Agencies scramble to curb explosion in U.S. opiate use