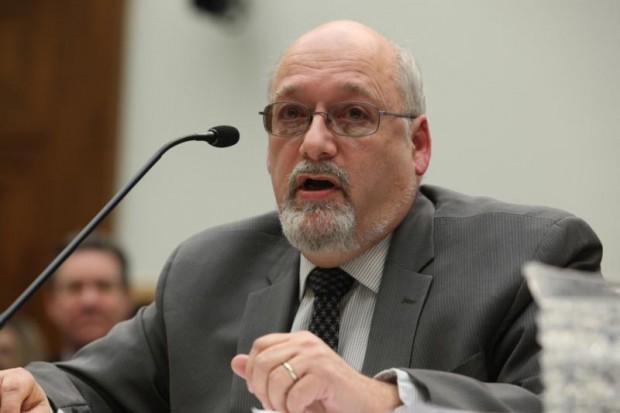 Richard M. Doerflinger, associate director of the U.S. bishops' Secretariat of Pro-Life Activities at the U.S. Conference of Catholic Bishops in Washington, testifies Jan. 9, 2014, in favor of a House bill that would make the Hyde amendment's ban on federal funding of abortion a permanent part of the law. He was to retire April 29. (CNS photo/Rick Reinhard)

And now his path is taking him into retirement as associate director of the U.S. bishops’ Secretariat of Pro-Life Activities and eventually across the country to Washington state.

Doerflinger, a 63-year-old native of the New York borough of Queens, served for 36 years as legislative assistant, assistant director, associate director for policy development and, since 2008, as overall associate director of the secretariat. His retirement was to begin April 29.

Although he did not know it at the time, his first pro-life influence came when he was 14. His older brother Eugene was involved in a car accident and was left in what is now called a persistent vegetative state for several months.

Doctors told Doerflinger’s parents that Eugene’s “life was over” and urged them to let him die, the younger Doerflinger said. Instead, they took him home and cared for him there until Eugene “became fully aware of the people around him.”

“From that I learned never to give up on people and about the unconditional love of a family,” Doerflinger said. But there was another bitter lesson when Eugene and his family realized how difficult it was for him to learn to stand and walk again when doctors had failed to treat his dislocated shoulder after the accident.

His journey then took him to the University of Chicago, where he met and married his wife of 38 years, Lee Ann. Starting out as a chemistry major and pre-med student, he began to find his philosophy courses “much more interesting,” so he switched to religious studies and theology.

Doerflinger came to Washington as a doctoral student in theology at The Catholic University of America, where his wife, a French language and literature major, worked as a legal secretary “to support her poor, starving student husband,” he said with a laugh. She eventually became a natural family planning instructor for the Archdiocese of Washington.

Wanting to contribute to the family finances, he heard about a job as a legislative assistant in the pro-life office of the U.S. Conference of Catholic Bishops. Even though he had no legislative experience, “I walked in and was hired,” he said.

Although his science background served him well on the technical aspects of pro-life work, “everything I know about public policy I learned on the job,” Doerflinger said. But the job was a good fit because “I can’t remember a time when I did not find the Catholic Church’s position on life compelling,” he added.

Over the next 36 years, there were both highs and lows for the pro-life movement.

“The high points would involve the passage of the ban on partial-birth abortion and the Supreme Court decision upholding that ban, the Weldon Amendment on conscience rights in 1994 and the Dickey Amendment on federal funding of embryo research in 1995,” he said.

“One of the biggest victories happened before my time in 1976 with passage of the Hyde Amendment,” which forbids federal funding for most abortions or abortion-related care and continues to be included in many federal appropriations bills, Doerflinger added.

Among the low points he cited were “the failure of Congress to retain the Stupak Amendment,” which would have prohibited any federal funding of abortion in the Affordable Care Act. “Sixty-five Democrats supported (the Stupak Amendment) in the House, but the Senate decided to do their own, more problematic bill,” Doerflinger said.

“I also regret that we never got Congress to do a real ban on human cloning or to act against the use of federally controlled drugs in assisted suicides,” he said.

Asked about the changes that have taken place in pro-life work during the past three decades, Doerflinger explained that “the public policy debate has moved, at least for now, from efforts to overturn Roe v. Wade outright to ways of reducing abortion and testing the envelope on what the (Supreme) court has set out.”

“There is more state legislation passed than ever before and a lot of it is pressing that envelope,” he added. “But even those modest laws do have an effect on reducing the abortion rate.”

Doerflinger said he was “delighted” to turn over the reins to his successor, Greg Schleppenbach, executive director of the Nebraska Catholic Conference, who was to begin work at the USCCB May 16.

“He really knows these issues and he’s a better coalition builder than I am, so now he can do this on the national scene,” he said.

Doerflinger will continue as a member of the Pontifical Academy for Life, to which he has belonged since 2011, and as a public policy fellow at the University of Notre Dame’s Center for Ethics and Culture and at the National Catholic Bioethics Center.

At the Vatican, he and his colleagues at the academy have been discussing issues such as the challenges to presenting the Catholic vision in a secularized society and the relationship between faith and science.

“Throughout the whole stem-cell debate, we were constantly being told that religion was getting in the way of science,” Doerflinger said. “But now the research that is moving most rapidly to cure a disease is the research we have been urging people to explore instead — adult stem-cell research.”

Richard and Lee Ann Doerflinger have raised four children, including Army Spc. Thomas Doerflinger, who died in combat in Iraq in 2004 at the age of 20.

Although his parents continue to grieve the loss of their oldest son, “Thomas was a smart young man who knew what he was getting into. He wanted to do something meaningful, something important … and he was very matter-of-fact about the possibility of dying.”

But, he added, “I have a great deal of sympathy for those who do not have their faith to support them” in such a tragedy.

Now that daughters Anna and Maria and son Matthew are out on their own, Doerflinger promised his wife, a native of Washington state, to “give her side of the country a chance.” They plan to move north of Seattle after they sell their home in Maryland.

“There are all kinds of articles I have not had a chance to write because of the day-to-day crises of the job,” he said. “I am certainly going to stay involved in these matters, just at a slower pace.”

PREVIOUS: At-home progesterone test could be game-changer for NFP users