New ordinations give reason for hope, but need for priests still great 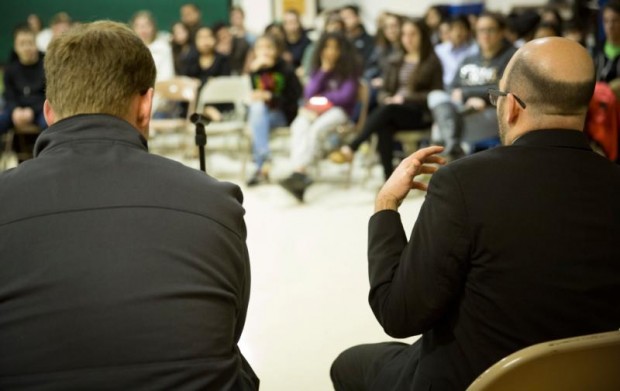 Seminarians from St. John's Seminary in Brighton, Mass., participate in a "Grill the Seminarians" discussion April 3 with members of a youth group from St. Patrick Church in Providence, R.I. (CNS photo/Chaz Muth)

WASHINGTON — It’s ordination season and Catholics have reason to be pleased with the numbers of priests who will serve the church well into the future.

In recent years, the numbers of priestly ordinations have given Catholic Church observers reason to believe there is not a global vocations crisis, but they acknowledge there is still a need for more.

“The good news is that the global number of priests stopped declining about five years ago,” said Father Paul Sullins, associate professor of sociology at The Catholic University of America in Washington.

Since 2012, the total has been stable at about 415,000 priests worldwide, a number that is the net of new ordinations and retirements or deaths, Father Sullins told Catholic News Service.

“The church now has about the same number of priests that it had in 1970,” he said. “The bad news, though it is not really bad news, is that the global population of Catholics has grown dramatically since then, so today we have far fewer priests per Catholic.”

Though the global numbers are currently strong and vocations are plentiful in some regions of the world, such as African and Asia, the quantity of priests are not as abundant in other continents, such as in parts of North America, Father Sullins said.

“We are importing priests from areas of the world where young vocations are booming, or at least more prevalent than in the U.S.,” he said. “In 2014, almost a third of priests ordained in the U.S. were foreign-born and that does not count foreign-ordained priests who serve in the U.S. on assignment.”

Many U.S. dioceses also are faced with a disparity in the number of new priests being ordained and the number who are retiring or leaving ministry, said Father Carl B. Fisette, director of vocations for the Diocese of Providence, Rhode Island.

“We have 18 men in formation at this time (and) over the years when they would be projected to be ordained, we will probably have about 54 priests who will be over the retirement age,” Father Fisette told CNS. “So there will be quite a net decrease in the number of priests in active ministry over the next six to eight years.”

These kinds of vocations trends are not unique to the New England states, said Providence Bishop Thomas J. Tobin, who said many of his fellow bishops throughout the country are faced with similar circumstances.

“It becomes a real challenge to ensure our parishes have enough priests to serve the people,” Bishop Tobin told CNS.

Though he called that fact unfortunate, Father Fisette said it did make it easier to spread the wealth in terms of priests serving Catholics.

“Mass attendance rates nationwide are down,” he said. “If you have fewer people going to Mass, you don’t need to have as many Masses in each parish.”

This allows the diocese to assign priests to multiple parishes, Father Fisette said.

The church also has more than 18,000 permanent deacons today who perform many functions, like homilies, baptisms and marriages, that were reserved to priests in the 1960s, when the church did not have permanent diaconate in place, said Father Sullins, author of “Empty Pews and Empty Altars: A Reconsideration of the Catholic Priest Shortage.”

Though growing secularization and parish closings have allowed dioceses to dispense their shrinking numbers of priests with greater ease, Father Sullins argued those cultural trends show there actually is a need for more priests to evangelize through their presence in society.

In its report “The Class of 2016: Survey of Ordinands to the Priesthood,” the Georgetown University-based Center for Applied Research in the Apostolate found that 51 percent of the respondents indicated that they were discouraged from considering the priesthood.

The laity can be an invaluable resource in increasing vocations simply by encouraging their sons to consider the priesthood, Father Sullins said.

“Many priests, including Pope Francis, relate that they first felt a call to priesthood from the example, devotion and encouragement of their mother and father,” he said. “A mother can consecrate her son to God’s service, which doesn’t necessarily compel him, but has a powerful influence on his choice of vocation and state of life.”

Regardless of the numbers, it’s still important to increase vocations, Father Sullins said.

“We need more priests, not because we are in some numeric crisis, but because God is always renewing his church through calling faithful young men to serve as priests,” he said. “To pray and work to (strengthen) new priestly vocations is the work of evangelization, in which all of us can contribute to the renewal and proclamation of the faith.”

PREVIOUS: Ryan says he was ‘wrong’ about views on poor in latest talk at Georgetown

NEXT: All Catholics have role in renewing marriage, family life, cardinal says