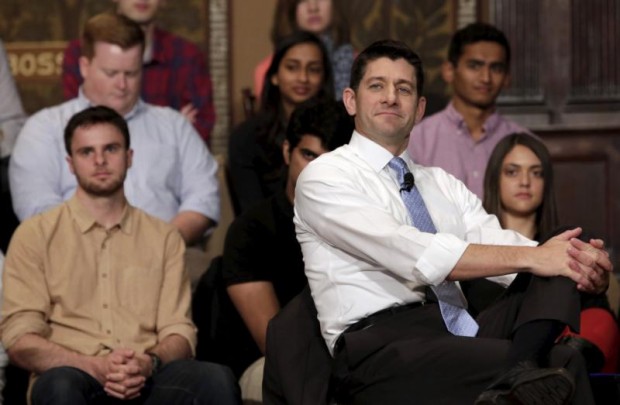 U.S. House Speaker Paul Ryan, R-Wis., listens to a questions as he speaks at a town hall meeting with millennials April 27 at Georgetown University's Institute of Politics and Public Service in Washington. (CNS photo/Yuri Gripas, Reuters)

WASHINGTON (CNS) — House Speaker Paul Ryan apologized for his earlier criticism of recipients of government benefits as “takers and makers,” and said Republicans strive for a country that is “open, diverse, dynamic” in a speech at Georgetown University.

Ryan’s one-hour talk April 27 at the Jesuit-run university’s Gaston Hall was billed by him as an effort to reach out to millennials. Political observers described it as an effort to soften his image in preparation for a 2020 run for the presidency.

The speech came nearly four years to the day that the Wisconsin Republican told a Georgetown audience, “The work I do as a Catholic holding office conforms to the social doctrine as best I can make of it.”

This time around, however, Ryan said nothing about his Catholic beliefs.

“What prompted you to reconsider your previous statements about poor people as takers?” asked Rachel Hirsch, a graduate student.

“I was just wrong,” Ryan replied. “I didn’t mean to give offense. … There are people who get knocked down in life. And to lump an entire category of people in one broad brush is wrong, I think.”

He added that the only way to deal with his previous rhetoric is, “Just own up to it. Just fess up and fix it.”

His 2012 remarks at the university were a flashpoint of that year’s presidential campaign when he ran for vice president on the Republican ticket headed by Mitt Romney.

Ryan had been criticized by advocates of poor and marginalized people for his stance. Rather than chastise, however, charitable organizations, led by Catholic Charities USA, have worked with Ryan and his staff for months to showcase programs that aid poor families, homeless individuals, the sick and the elderly while stressing the importance of a federal partnership to support such efforts because the nonprofits would be overwhelmed if left to provide social services solely on their own.

Ryan’s words were a version of the apology he has been offering in speeches and TV interviews since January. His language to students was less strident than during his first visit, but he did not get into the specifics of policy proposals.

“I want to make my case: Why support Republicans? I’m going to go out on a limb and assume the thought had not occurred to most of you. So here’s how I’d sum it up: The America that you want is the America that we want — open, diverse, dynamic. It is what I call a confident America, where the condition of your birth does not determine the outcome of your life, where we tackle our problems together so that all of us can thrive,” Ryan said.

In response to a student question, Ryan said action by Congress on immigration reform “will have to wait for the next president” and repeated his familiar accusation of President Barack Obama “going around Congress and making laws” with executive orders.

Securing the border, he said, is about “heroin and opiods. This is about ISIS. It’s not about Latinos. It’s not at all about that.”

Ryan called for “more competition in student lending” to provide more alternatives in college choices. “Look, I love this school, you’ve had some awesome basketball teams … but not everyone can afford a place like this,” he said.

Ryan did not mention Donald Trump or any other Republican presidential candidates by name. One student, who said he was a Republican, said he was unhappy with both Trump and Texas Sen. Ted Cruz and asked Ryan if there was a reason for hope.

Ryan maintained his neutrality on the race for the Republican nomination, but added, “I have never seen the well poisoned as much as it is these days. … I’d like to say it’s just the Democrats, but it’s not — it’s both.”

He decried the use of “identity politics” as a successful political strategy. “Now unfortunately, both sides are playing this game. And all it’s doing is dividing us as a country,” he said.

With “45 million people out there in poverty” and anxiety about stagnant wages, “right now in the primaries, it’s being accelerated and exacerbated. Gas is being thrown on the fire,” he added.

“Republicans lose personality contests anyway. We always do. I’ve learned that lesson the hard way. But we win ideas contests. And this is what we want to have is an ideas contest.”

PREVIOUS: Catholic vote not as monolithic as it once was, but still important

NEXT: New ordinations give reason for hope, but need for priests still great