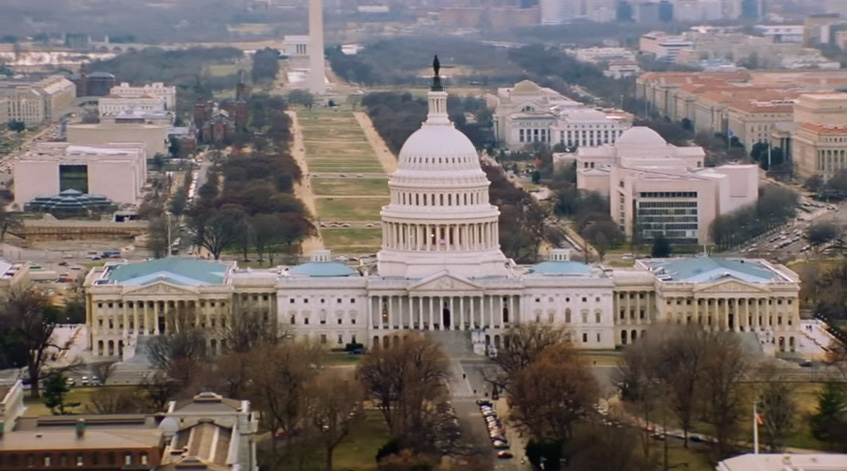 A screen shot from a new video by the U.S. Conference of Catholic Bishops on religious freedom shows the the Capitol building in Washington. The video traces the origins of Catholic teaching on religious liberty and promotes the Fortnight for Freedom, a two-week period of prayer, education and advocacy focused on the role of faith in public life and the preservation of religious liberty rights, to be held this year June 21-July 4.

The archbishop made the comments April 12 as chairman of the U.S. Conference of Catholic Bishops’ Ad Hoc Committee for Religious Liberty, which released the video.

Vatican II’s 1965 Declaration on Religious Freedom affirmed that the “right to religious freedom has its foundation in the very dignity of the human person, as this dignity is known through the revealed word of God and by reason itself.”

The video also highlights the Little Sisters of the Poor, who serve the elderly poor in nursing homes across the United States. The Little Sisters, along with other Catholic entities and other faith-based groups, await a decision from the U.S. Supreme Court in Zubik v. Burwell, a lawsuit that challenges the U.S. Department of Health and Human Services’ mandate that employers, including most religious employers, cover contraception, sterilization and abortifacients in employee health plans.

“This video makes clear that the Little Sisters’ case must be viewed within the context of the church’s deep commitment to the right of every person to have the ability to practice their faith and choose what is right, free of government interference,” Archbishop Lori said.

Oral arguments in Zubik v. Burwell were heard by the high court March 23.

On March 29, the court issued an unusual order seeking additional briefs from the plaintiffs and the federal government about how and if contraceptive insurance coverage could be obtained by employees through their insurance companies without directly involving religious employers who object to this coverage.

On April 12, the plaintiffs filed a brief with the court in which they agreed with the proposal that such coverage be provided through an alternative health care plan without involving the religious employers. The government also filed a brief, arguing that it wanted to keep the contraceptive mandate intact, but offered that it would go along with the court’s suggestion despite the possibility that it might not close the door on future legal challenges.

The announcement on the new video also included information on the U.S. bishops’ 2016 Fortnight for Freedom, a two-week period of prayer, education and advocacy focused on the role of faith in public life and the preservation of religious liberty rights.

The fifth annual observance will take place June 21-July 4. This year’s theme is “Witnesses to Freedom” and will include a nationwide tour of relics of St. Thomas More and St. John Fisher, martyrs of the English Reformation.