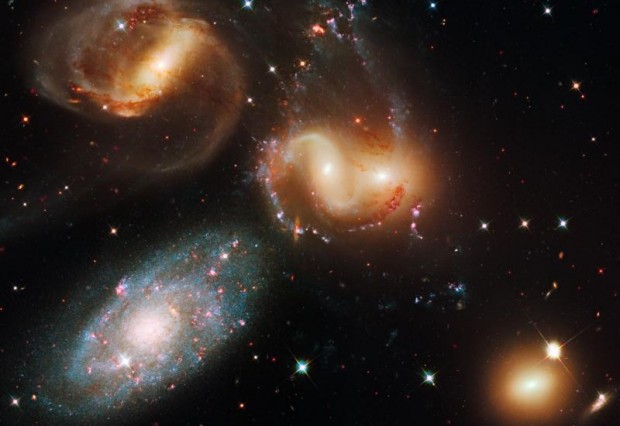 Stephan's Quintet, a compact group of five galaxies 280 million light years from Earth, is seen in this image from the Hubble Space Telescope. Courses being developed at U.S. seminaries are exploring connections between science and religion so clergy and lay ministers can better address scientific topics with parishioners. (CNS photo/courtesy of NASA)

WASHINGTON (CNS) — A wave of courses connecting branches of science with Catholic teaching is emerging in seminaries across the country.

The goal is to raise “the scientific literacy of clergy,” said Doris Donnelly, retired professor of religion at John Carroll University in suburban Cleveland, who is administering a three-year, $1.5 million grant funding the Science and Faith in Seminary Formation program for the school.

The courses are not just limited to clergy, but also have seminarians, lay ministers and anyone interested in the intersection of Catholicism and the sciences in mind, Donnelly told Catholic News Service.

In all, staff at 15 seminaries received grants of $10,000 each in the program’s first year. Faculty and administrative staff are introducing courses that address topics as diverse as human genetics and biotechnology, Christian anthropology, Darwin’s theory of evolution, marriage and human sexuality, and brain science as it relates to Catholic ritual and mysticism. Except in one case, the courses will roll out in the 2016-2017 academic year.

For some instructors, the emphasis on science and religion is a key component of the new evangelization. Others see science education as crucial in a world where science is usually portrayed as contradicting faith.

Most importantly, however, instructors said, the courses can help students find new ways of understanding God and share that understanding with people in the pews trying to make sense of the information they are bombarded with daily.

“We want to be able to integrate science and religion so people in the pews don’t have to check their critical mind at the church door,” said Dominican Sister Linda Gibler, associate academic dean at the Oblate School of Theology in San Antonio, a grant recipient.

Edward Kaczuk, professor of liturgical-sacramental theology at St. Mary Seminary & Graduate School of Theology in the Diocese of Cleveland, sees a close intersection between science and religion.

“Both theology and science are in search of the truth and in that sense both can inform each other. Scientists and theologians are seekers and there are things we can offer each other in both disciplines,” said Kaczuk, who has developed a course with Father Michael G. Woost, another liturgical-sacramental theology faculty member, with the help of a grant.

The intersection of faith and science enticed Donnelly to pursue the grant and distribute funds to encourage science education at seminaries nationwide. The funding allows faculty to arrange for guest speakers to appear in classes and present public lectures as well.

“The legacy of the Catholic Church is a legacy of appreciating the advances of science and the relationship between scientists and theologians in pursing the truth,” Donnelly said. “There is one truth, two different ways to get at the truth.

“The legacy was sort of fractured, or as some people say, divorced, at the time of the Enlightenment (in the 17th and 18th centuries) when science was ranked as superior. However, with our recent popes and recent church documents … there’s been a resuscitation of this,” she said.

At the Oblate school, Sister Linda will teach “Catholicism in an Evolving World” with R. Scott Woodward, vice president for academic affairs. The course will examine Catholic theology and spirituality, which emerged long before recent understanding of cosmology or the idea of evolution developed, and the change in thinking required in moving from a static world to one that is continuously emerging.

The Bible, she explained, tells of Adam being made from the dust of Earth. Astronomical discoveries indicate that Earth is made of material blown off of novae, stars exploding at the end of their life cycle, which makes humans made of “the stuff of stars,” Sister Linda said.

Such an understanding can help people respect God’s creation as they begin to identify and connect the suffering of Earth, personal suffering and the suffering Jesus, she added.

While most of the courses will begin this fall, Father Joseph R. Laracy at Immaculate Conception Seminary at Seton Hall University in South Orange, New Jersey, is nearing the completion of his course, “Creation and Science.” He will offer it again this fall.

The systematic theology course was developed to deepen students’ relationship between Catholic theology in creation and contemporary empirical science, explained the priest, who holds a master’s degree in engineering systems from the Massachusetts Institute of Technology and once worked at Ball Aerospace & Technologies on NASA’s Deep Impact mission to a comet.

“It’s important for the new evangelization. A lot of people, particularly in the U.S. and Europe, are presented at a very young age with the false conflict that Christian faith and modern science are incompatible. Whether it’s future priests (or) lay ministers in church, we need to equip people to confront that lie,” Father Laracy said.

The course developed by Dominican Father Christopher J. Renz, academic dean at the Dominican School of School of Philosophy and Theology in Berkeley, California, is designed to help seminarians make connections between Catholic worship and contemporary science. His course can be traced to his natural inquisitiveness.

“I’ve spent 10 years reflecting on Catholic worship as a priest. As a scientist I’ve always been interested in why. I always like to say when I got a toy as a child the way to play with it was to take it apart and figure out how it worked,” he said.

“As a priest, that’s what I’ve been doing from a scientific perspective. Not what are we doing but why are we doing it,” explained Father Renz, who holds a doctorate in microbiology-immunology from Northwestern University.

Beth Rath, assistant professor of philosophy at Borromeo, told CNS she hopes to “relieve the false dilemmas” between science and religion in her course.

“The new evangelization is for priests and for laypeople involved in the parishes to become scientifically literate so they can reach out to those people in the pews,” she said.

Rath plans to address topics related to neuroscience and biology as well as issues that might arise in the news.

Kaczuk and Father Woost, are preparing to explore the emerging field of neurotheology — also known as spiritual neuroscience — and how the brain may be hardwired for spirituality in their course. Father Woost, who has led retreats on the Christian mystical tradition and researched the topic, said the course should give students insight into how people experience religion and grace.

“A number of people are studying this who are supportive that God and human beings interact and the brain is the primary locus for this interaction,” Father Woost explained.

Father Mark A. Latcovich, president-rector of the Cleveland seminaries, said the courses will help present the Gospel to a world that “values science more than anything else.”

“With everything being said today from the church’s perspective about the new evangelization or even Pope Francis in the “Joy of the Gospel,” we really have to learn to talk with the culture and embrace it and be able to transform it,” he told CNS.

Donnelly said last year’s request for proposals drew interest from 41 seminaries. A second round of funding, for courses during the 2017-2018 academic year, was announced in March. Donnelly said the program plans to fund another 15 seminary courses. Some funding is available for courses that will be taught again.

Pre-proposals are due May 3. From those submitted, a committee will invite finalists to submit full proposals by Aug. 22. Awards will be announced Sept. 20.

Another component of the grant provides seeks to encourage writing on science and faith. In the first year, four seminarians and three seminary faculty received cash awards for their writing.

Information on the grant program is available here..

NEXT: Video looks at meaning of religious freedom, court fight on mandate