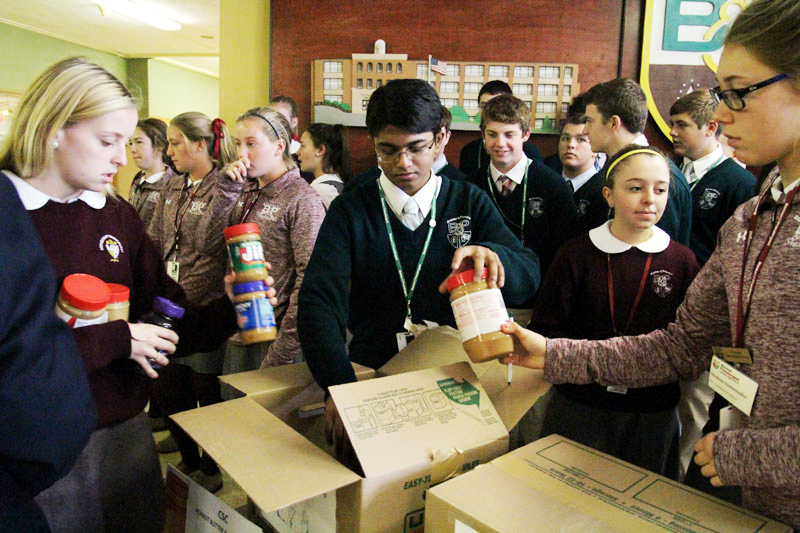 Monsignor Bonner-Archbishop Prendergast High School students box up the peanut butter and jelly they collected for the annual Peanut Butter and Jelly Drive run by archdiocesan Nutritional Development Services on Nov. 2, 2015. A new Pew Research Center study of Americans across the religious spectrum finds that 65 percent of highly religious adults say they have donated money, time or goods to help the poor in the past week, more than half again as many as the 41 percent who are less religious.

WASHINGTON (CNS) — A new Pew Research Center study of Americans across the religious spectrum finds that faith plays a measurable role in how people live their everyday lives.

“People who are highly religious are more engaged with their extended families, more likely to volunteer, more involved in their communities and generally happier with the way things are going in their lives,” said the introduction to the study, “Religion in Everyday Life,” which was issued April 12. (See the full report here.)

As for Catholics, “three-quarters of Catholics say they look to their own conscience ‘a great deal’ for guidance on difficult moral questions. Far fewer Catholics say they look a great deal to the Catholic Church’s teachings, the Bible or the pope for guidance on difficult moral questions,” with 21, 15 and 11 percent, respectively, saying they do, according to the report.

Catholics are the single largest religious group in the United States at 21 percent of the survey population, according to Pew’s Besheer Mohamed, the report’s principal author.

In an April 11 telephone interview with Catholic News Service, Mohamed said Catholics are so large within Christianity overall, “when we report ‘x’ percent of Christians say such-and-such, it’s very hard to be one way and Catholics to be somewhere else.”

Pew asked about 16 particular behaviors, in two groups of eight, as to whether they were considered by respondents to be essential to Christian identity. On none of them did more Catholics than Christians overall deem them essential; the closest they came was attending religious services — 35 percent of all Christians, 34 percent of Catholics.

In descending order of importance, here is what Catholic respondents declared to be essential: believing in God; being grateful for what you have, being honest at all times; forgiving those who have wronged you; praying regularly; committing to spend time with your family; working to help the poor and needy; attending religious services; not losing your temper; reading the Bible or other religious materials; and — with a tie between them — helping in the congregation and dressing modestly.

Bringing up the rear were working to protect the environment; buying from companies that pay a fair wage; living a simple lifestyle; and resting on the Sabbath. There were not great differences between Catholics and other Christians on the order of the list from top to bottom.

Pew purposely did not ask about specifics relating to the Ten Commandments, Mohammad said, adding it would have been “a little double-barreled.”

The report draws findings from Pew Research Center’s U.S. Religious Landscape Study, which examined religious beliefs, practices and experiences of Americans, and from a supplemental survey designed to go beyond traditional measures of religious behavior — such as worship service attendance, prayer and belief in God.

In the survey, 2,437 Catholics were interviewed by phone from among 35,071 Americans.