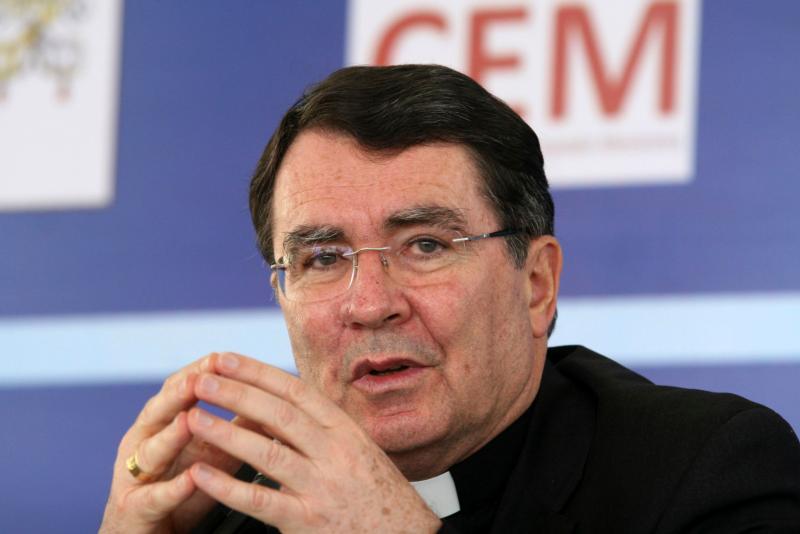 Archbishop Christophe Pierre, apostolic nuncio to Mexico since 2007, has been appointed the new apostolic nuncio to the United States. Archbishop Pierre is pictured during a press conference regarding the visit of Pope Benedict XVI in Leon, Mexico, in this March 19, 2012, file photo. (CNS photo/Mario Armas, Reuters) 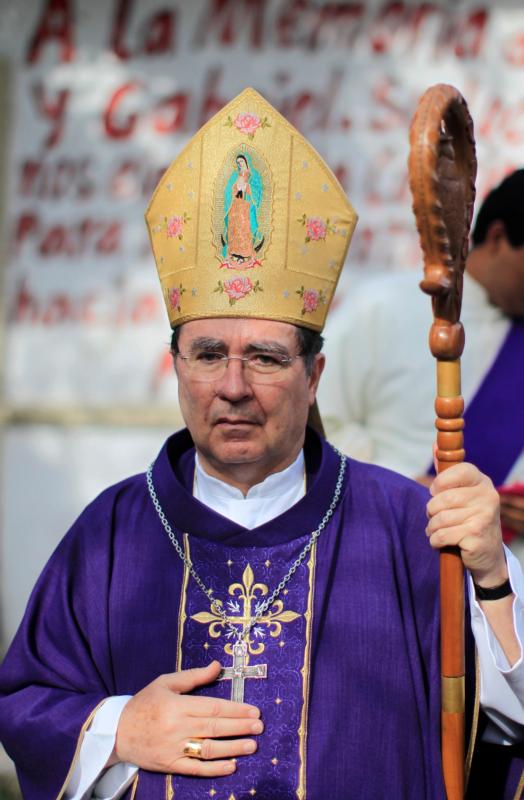 Archbishop Christophe Pierre has been appointed the new apostolic nuncio to the United States. Archbishop Pierre is pictured celebrating a Mass for the families of missing students near Chilpancingo, Mexico, in this Dec. 22, 2014, file photo. (CNS photo/Jorge Dan Lopez, Reuters)

WASHINGTON (CNS) — Pope Francis has appointed Archbishop Christophe Pierre, papal nuncio to Mexico since 2007, to be the new apostolic nuncio to the United States.

He succeeds Archbishop Carlo Maria Vigano, who has been in the post since 2011. Archbishop Vigano turned 75 in January, the age at which canon law requires bishops to turn in their resignation into the pope.

As president of the U.S. Conference of Catholic Bishops, Archbishop Joseph E. Kurtz of Louisville, Kentucky, shared “a heartfelt greeting and my prayerful support” of the newly named nuncio “as he embarks on his service to our country.”

“A shared closeness with the church in Mexico already creates a strong fraternal bond between us,” said the archbishop about the April 12 appointment.

“With fond affection, allow me also to thank Archbishop Vigano for his selfless contributions to the life of the Catholic Church in the United States,” Archbishop Kurtz added.

A nuncio is a Vatican diplomat with the rank of ambassador. He is responsible for diplomatic relations with the government, but also serves as the pope’s representative to the church in a given country, which includes responsibility for coordinating the search for and vetting of candidates to become bishops.

Christophe Louis Yves Georges Pierre was born Jan. 30, 1946, in Rennes in France’s Brittany region, where his family has had roots for many generations. He first attended school at Antsirabe in Madagascar, pursued his secondary education at the College of Saint-Malo in France and also spent one year in Morocco at Lycee Francais of Marrakesh.

He entered Saint-Yves seminary in Rennes in 1963, but he interrupted his studies for two years of military service in 1965 and 1966. He was ordained a priest of the Archdiocese of Rennes at the Cathedral of Saint-Malo April 5, 1970.

Then-Father Pierre earned his master’s degree in theology at the Institut Catholique de Paris and his doctorate in canon law in Rome. He was parochial vicar of the parish of Saint-Pierre-Saint-Paul de Colombes in the Diocese of Nanterre, France, from 1970 to 1973.

He then earned a diploma at the Pontifical Ecclesiastical Academy in Rome, which provides training to priests for eventual service in the Vatican’s diplomatic corps. In 1977, he entered diplomatic service, with his first post in Wellington, New Zealand. He then served in Mozambique, Zimbabwe, Cuba, Brazil and at the Permanent Observer Mission of the Holy See to the United Nations in Geneva.

In Philadelphia, Archbishop Charles Chaput said in a statement that he joined Catholics around the country “in offering best wishes to Archbishop Pierre as he accepts this important post.”

“Throughout his many years of service to the Church, Archbishop Pierre has displayed a strong sense of just diplomacy,” he said, noting the new nuncio’s previous assignments. “His broad experience will greatly benefit the Church in the United States.”

“I also want to express my deep gratitude to Archbishop Carlo Maria Vigano, now retiring from his diplomatic duties,” Archbishop Chaput said. “Throughout his time as Nuncio to the United States, Archbishop Vigano worked zealously for the spiritual welfare of Catholics and many other good people in our country. I am particularly thankful for his personal friendship and invaluable assistance as the Archdiocese of Philadelphia prepared for the World Meeting of Families and the visit of our Holy Father last year.”

Washington Cardinal Donald W. Wuerl said in a statement that he looked forward to welcoming Archbishop Pierre to the archdiocese “where he will make his home as he carries out his responsibilities across the country.” The apostolic nunciature is located in the nation’s capital.

“Archbishop Pierre is recognized for his distinguished diplomatic career and service to the church,” said the cardinal, who also expressed gratitude for Archbishop Vigano’s service.

“As he departs Washington and concludes his service to the church, I offer my gratitude for his many kindnesses as we worked together, particularly in anticipation of the visit of Pope Francis to the United States last September,” Cardinal Wuerl said. “Archbishop Vigano carries with him our heartfelt prayers and best wishes.”