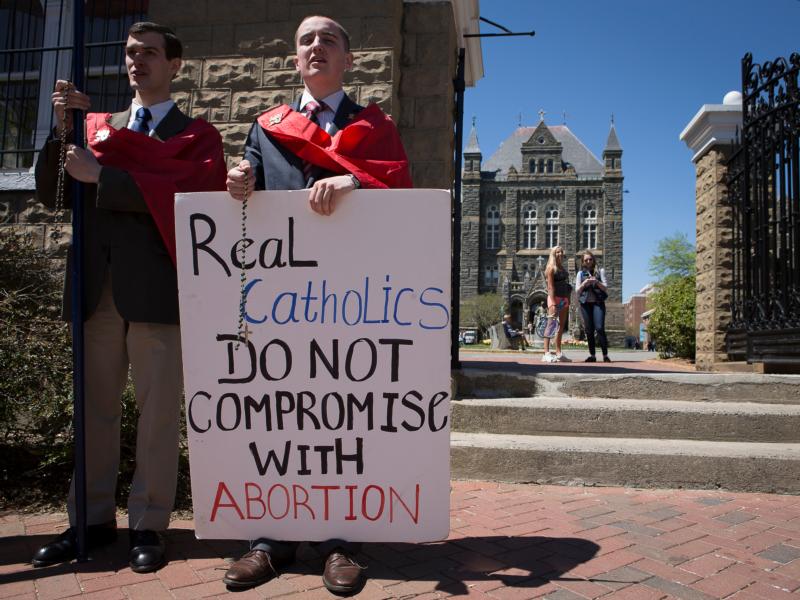 UPDATED — WASHINGTON (CNS) — The controversy over the appearance by the head of Planned Parenthood at Jesuit-run Georgetown University April 20 became the background to a standing ovation.

Cecile Richards was greeted warmly by more than 400 students, most of them women, at Lohrfink Auditorium. She was introduced by Helen Brosnan, a senior and president of the Georgetown Lecture Fund.

Student Amber Athey, a member of Georgetown Right to Life, tweeted, “According to head of GU lecture fund, hosting an abortion provider is ‘in the spirit of a Jesuit university.'”

Another member of the group, a Maryland student who would only give her first name, Caroline, said of Richards: “Her speech didn’t address abortion and I felt that was very intentional.”

The student-run Georgetown Lecture Fund has hosted other speakers this spring including a talk via Skype from Russia by national-security whistleblower Edward Snowden. The group also held a panel discussion on the Catholic Church’s response to sexual abuse with Dominican Father Thomas Doyle, a canon lawyer, an advocate for abuse victims and a harsh critic of the U.S. church, and Washington lawyer Robert Bennett, who helped prepare a 2004 report on abuse prevention for the U.S. bishops.

Richards’ one-hour appearance, billed as “a conversation,” earlier had been strongly criticized by Cardinal Donald W. Wuerl of Washington, who wrote that “students, faculty, and the community at large are all impoverished, not enriched, when the institution’s Catholic identity is diluted or called into question by seemingly approving of ideas that are contrary to moral truth.”

The event ran without incident, with only a small protest outside the auditorium by Georgetown Right to Life, a protest outside the campus by the Pennsylvania-based American Society for Tradition, Family and Property, and with heavy security, including District of Columbia police officers to supplement campus officers.

Although it was closed to news media and accessible only to students with university IDs, Planned Parenthood later released a transcript of Richards’ remarks. Much of what Richards and students said during a brief question-and-answer session was relayed through occasional tweets, including how well the CEO was received, and Students for Life also released a transcript of one exchange.

“I love that Georgetown students are the kind of people who don’t have to agree with someone to listen to her thoughts,” Richards said.

She praised an unofficial student group, Hoyas for Choice. “I’m so proud of all you are doing to make sure the students of Georgetown have access to reproductive health care  –  10,000 condoms distributed last semester. Because of you, someone somewhere is having safer sex.”

Referencing the contraceptive mandate in the Affordable Care Act, Richards praised Georgetown law student Sandra Fluke’s appearance to argue for “access to birth control” at a 2012 congressional hearing on the moral objections raised by religious employers to the requirement.

Catholic and other religious employers oppose the federal government’s mandate that they provide for contraception in their health care coverage even if the employers morally object to such coverage. The Zubik v. Burwell case, which includes the dioceses of Pittsburgh and Erie and the Little Sisters of the Poor, is currently before the U.S. Supreme Court, which is expected to rule on it in June.

Members of Georgetown Right to Life complained that Richards was dismissive of anything spoken by pro-life students, including one who mentioned a Guttmacher Institute poll that asserted that 52 percent of Americans believe life begins at conception.

Joshua De Gastyne, a Georgetown medical student, and Hunter Estes, another member of Georgetown Right to Life, complained that questions were restricted to the final eight minutes of the presentation, leaving Richards to take only four questions, with just two of them from pro-life students.

Richards, they said, dismissed both the question about the Guttmacher Institute poll and one about why most of Planned Parenthood’s business concerns only abortions, adding she framed “reproductive rights” as a civil rights and social justice issue.

In her remarks, Richards cited the Guttmacher Institute’s finding that “the majority of teenagers outside metropolitan areas aren’t getting basic information” about sex education.

An unnamed member of Georgetown Right to Life asked Richards about the institute’s data that indicated 94 percent of pregnancy services at Planned Parenthood clinics consist of abortions, while about 6 percent are sonograms and less than 1 percent are adoption counseling. “How can you say that when a woman walks into your clinic she has a choice?”

“We are not the Guttmacher Institute, but that’s OK,” Richards responded. “But what I am saying actually, is that I would really encourage you to come visit a Planned Parenthood center. What you will find … is a health care organization that provides women the full range of reproductive health care and preventative services.”

She called the recent series of videos by pro-life activist David Daleiden “fraudulent,” adding, “Planned Parenthood has never sold fetal tissue and never would.” The videos show Planned Parenthood officials discussing fees related to fetal tissue, but the organization says they are standard reimbursement fees charged to researchers. But last fall Richards announced the organization would no longer accept the reimbursements.

Daleiden and his partner, Sandra Merritt, have been indicted by a Houston grand jury for using deceptive means of accessing employees and clinics of Planned Parenthood, and in California, Planned Parenthood also is suing him and his Center for Medical Progress for allegedly inciting violence and causing an increase in threats at its clinics.

There were no outbursts outside from members of Students for Life, who were occasionally joined by adults, including a woman wearing a T-shirt emblazoned with “The Pill Kills.”

At one point, a woman walking by announced, “Thank God for Planned Parenthood!” A male protester shouted back, “The body inside your body is not your body!”

That evening, Students for Life sponsored Abby Johnson, a former Planned Parenthood clinic director who resigned in 2009 to become a pro-life activist, at the university’s Dahlgren Chapel. Johnson operates a ministry for former abortion workers called And Then There Were None.

Johnson described her Planned Parenthood work as “one rationalization after another,” and finally quit when she saw that her clinic’s abortion quota for 2009-10 “had actually doubled.”

“To the abortion industry, if a baby is unborn, then it magically becomes tissue … something that is easily discarded,” she said.

PREVIOUS: Inquiry into Dorothy Day’s life next step in sainthood cause

NEXT: No matter how court rules in immigration case, questions remain