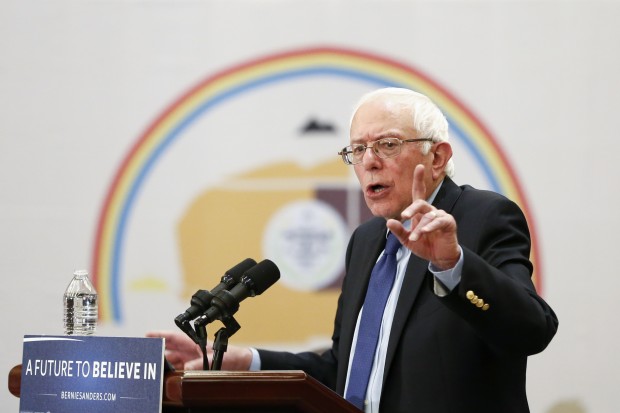 Sen. Bernie Sanders D-Vt. and Democratic presidential candidate, speaks during a town hall event March 17 at the Navajo Nation casino in Flagstaff, Ariz. Bishop Marcelo Sanchez Sorondo, chancellor of the Pontifical Academy of Sciences, released a statement April 8 indicating that he invited Sanders to the Vatican for a conference hosted by the academy. Sanders released a statement the same day saying he accepted the invitation. (CNS photo/Nancy Wiechec)

When asked about the controversy surrounding the invitation during a presidential campaign cycle and whether that translated into the Vatican somehow supporting his bid, he told the Italian daily La Repubblica, “No, that’s not it. The Vatican isn’t involved in that. The conference isn’t a political event.”

Sanders was one of about 35 economists, academics, church leaders and politicians invited to attend a conference April 15-16 dedicated to St. John Paul II’s 1991 social encyclical “Centesimus Annus.” The meeting was jointly sponsored by the Pontifical Academy of Social Sciences and the Institute for Advanced Catholic Studies. Ecuadorian President Rafael Correa and Bolivian President Evo Morales were also invited to speak at the two-day conference.

In his 15-minute address, the Jewish senator extolled the Catholic Church’s social teachings, saying few others “rival the depth and insight” the church displays in its moral teaching on the challenges of a market economy.

He extensively quoted from Pope Francis’ many interventions, while also offering snippets of his own political platform, describing the effects deregulation, financial fraud and corporate campaign financing has had in the United States.

Despite the huge political, economic and moral challenges, he said, “Pope Francis himself is surely the world’s greatest demonstration against such a surrender to despair and cynicism” and is an inspiration for building a global consensus for a better world.

He told reporters that Pope Francis’ encyclical on creation “has played a profound role in turning many people’s minds around about the urgency of the moment in terms of dealing with climate change. So when I received this invitation — yeah, I know it’s taking me away from the campaign trail for a day — but when I received this invitation, it was so moving to me that it was something that I could not just simply not refuse to attend.”

The pope said, “I had envisaged coming today around 7 p.m. to greet the participants,” but realized that would be “very complicated” given his early morning departure the next day to visit migrants stranded on the Greek island of Lesbos. In his note, the pope apologized for not being able to attend and sent his greetings, prayers and thanks to those who participated.

In his morning address, Honduran Cardinal Oscar Andres Rodriguez Maradiaga, a member of Pope Francis’ international Council of Cardinals, said humankind may have made huge strides and grown into “a technical giant,” but its lack of compassion and selfishness has also reduced it to “an ethical dwarf.”

Materialism and an unfettered economy lead to the secularization of the individual who “looks for more money, more beauty, more health, more fame, more youthfulness and more eroticism. And more love is never spoken about,” he said.

A moral economy isn’t opposed to capitalist principles of investment, he said during the discussion period. “Why not (make investing be) something clean, open, ethical” and not corrupt, hidden and self-serving, he said.

Mary Hirschfeld, associate professor of economics and theology at Villanova University in Phildelphia, said she wonders if the problem in today’s economies is not that it follows an “immoral economic logic,” but that there are “competing moralities.”

It was a moral principle “that said the way you find your human fulfillment is by trying to maximize your utility, maximize your profits, maximize” everything, while Catholic ethics shows there is a different kind of happiness.

In his talk, U.S. economist Jeffrey Sachs, director of the Sustainable Development Solutions Network, a United Nations initiative, recalled being part of a team of delegates invited by the Pontifical Council for Justice and Peace decades ago to help inform the pope as he prepared “Centesimus Annus.”

He was picked, Sachs said, because he had been advising the pope’s native Poland and the Solidarity movement as it transitioned out of a communist economy, and even briefed the pope about “how things were going” back home.

While the economic and technological revolutions that swept the world over the last quarter of a century have had positive impacts, such as tripling gross world product and reducing extreme poverty, a moral framework was not applied, so corruption, inequality and instability have multiplied, he said.

Daniel K. Finn, professor of economics and theology at St. John’s University in Collegeville, Minnesota, said in his opening address that the conference was meant to ask where the church needs to “go from here” as it promotes its teachings and actively engages in the world.

The academy’s role includes listening to top specialists to gain insights that “can help both church leaders and ordinary Catholics better understand what is happening around them,” he said in the program’s introduction, jointly written with Margaret Archer, a British sociologist and president of the academy.

Close observation and analysis as well as “a generous listening to the multiplicity of ‘grass-roots’ groups and movements around the globe is critical for an adequate grasp of social reality today,” the introduction said.

Michael Naughton of the University of St. Thomas in St. Paul, Minnesota, told Catholic News Service April 15 that the broad tradition of Catholic social teaching still needs to penetrate people’s daily activities so its principles are translated into action.

Such “specific dimensions” of everyday life include “the intellectual, philosophical, economic, political and cultural” worlds, he said, “and then you need practitioners who are doing these things on the ground.”

The academy, therefore, “is obviously taking the teachings and engaging it in the thought and the practice because what do you have here, you have academics and you have presidents,” he said.

When asked about the implications of the church engaging with politicians and the controversies that that often triggers, Naughton said, “the church always has to be careful of becoming co-opted by either economic or political forces. It is largely a cultural institution, it’s providing a guide to these political and economic realities.”

“You have to be careful,” he said, and have an open discussion about where the line should be drawn, he said.