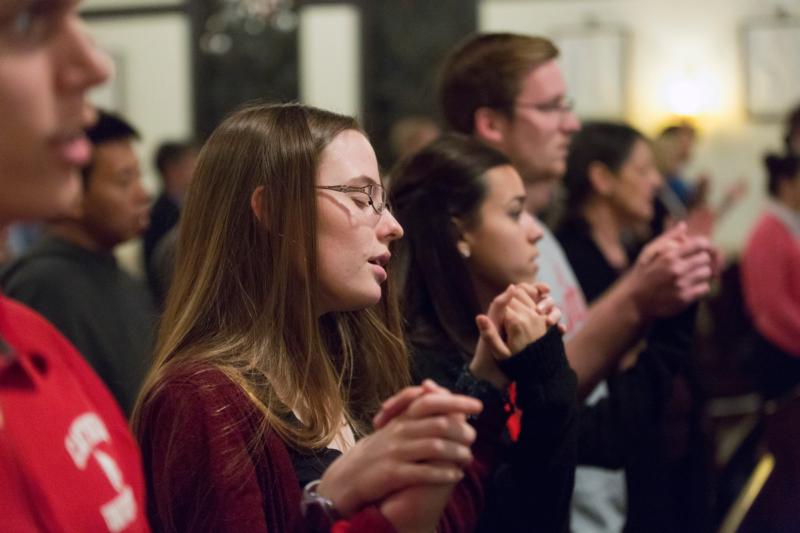 College students pray during an April 21 University Mass for Life at Epiphany Catholic Church in Washington, one day after Planned Parenthood's president, Cecile Richards, gave a speech at nearby Georgetown University at the invitation of a student-led group. (CNS photo/Jaclyn Lippelmann, Catholic Standard)

WASHINGTON (CNS) — One day after Planned Parenthood’s president, Cecile Richards, spoke at Georgetown University, Washington Cardinal Donald W. Wuerl celebrated a University Mass for Life for college students at a nearby Catholic church, encouraging them to stand up for God’s gift of human life.

A Georgetown student group’s invitation to Richards, the head of the nation’s largest abortion provider, to speak April 20 at the country’s oldest Catholic university drew nationwide criticism and was countered by a week of pro-life activities at the school.

The events included panel discussions on the dignity of life and the importance of outreach to women facing crisis pregnancies, and talk by Abby Johnson, the former director of a Planned Parenthood clinic who is now pro-life and speaks out about the reality of that agency’s abortion practices.

In his homily at the April 21 Mass at Epiphany Catholic Church, Cardinal Wuerl warned about a powerful politically correct movement and environment “all around us. … It says to set aside such things as the value of human life and substitute the politically correct position that actually you should be free to choose to kill the unborn child. But the word of God says to us, ‘Don’t conform yourself to this age.'”

The congregation of nearly 150 people included students from local universities, along with faculty members, campus ministry staff, and young adults from the Washington area. Cardinal Wuerl was joined by five concelebrating priests who serve in campus ministry.

A group of about two dozen Georgetown University students, along with faculty and staff members, met at their school’s gates and walked several blocks to the Mass. At the church, the students joining them came from schools including George Washington University, The Catholic University of America, the University of Maryland, Howard University and American University. 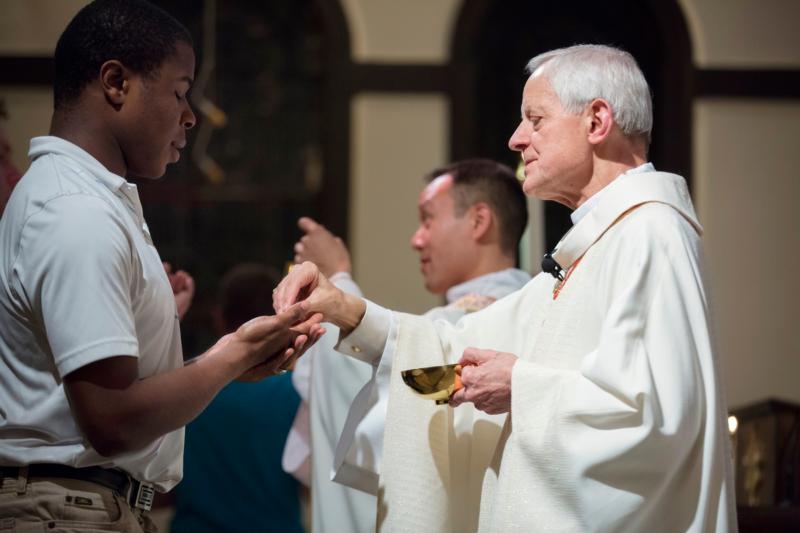 The congregation was greeted by Father Adam Park, the pastor of Epiphany Parish, who also is the chaplain at George Washington University’s Newman Catholic Student Center. “Today in our culture when our Catholic faith is not always respected, we want to reaffirm our Catholic identity and witness to the Gospel value of life,” Father Park said.

While not specifically mentioning Georgetown University or the Richards controversy in his homily, Cardinal Wuerl did address several related underlying issues.

The day before Richards was greeted by a standing ovation by Georgetown students at her speech on campus. In her opening remarks, she expressed hope that Hoyas for Choice, an unofficial student group on campus that advocates for keeping abortion legal would someday be recognized as “an official campus group” there, adding, “A girl can dream.”

In his homily, Cardinal Wuerl encouraged students not to be “deceived by the politically correct rhetoric that uses words to hide true meaning. Those in favor of killing the unborn child often speak of ‘the product of conception’ as opposed to the child in the womb. They speak about ‘facilitating the conclusion of the life cycle’ instead of ‘assisting a suicide.’ So it is with that buzz word ‘choice.’ When you use the word ‘choice,’ you have to complete the sentence. What is it you choose?”

He noted that students aren’t free to smoke in the university cafeteria or park wherever they want without consequences.

“Choice only makes sense when you complete the sentence,” Cardinal Wuerl said. “The word ‘choice’ is a smokescreen behind which those killing unborn children take refuge. Every chance you get, blow that smoke away, so everyone knows what it is we’re talking about.”

In her Georgetown address, Richards — whose Planned Parenthood organization provided 327,653 abortions in the United States in fiscal year 2014 — compared the struggle for “reproductive rights” to the nation’s history of fighting for civil rights.

Cardinal Wuerl in his homily said, “Do not ever be convinced by the rhetoric of liberation that killing unborn, innocent children is in any way similar to the great social justice struggles that our nation has faced – many times enlightened by the Church’s social teaching. Whether it was the fight against slavery, racial discrimination or unjust working conditions, the Church’s proclamation of the dignity of all human life was at the center of the struggle.”

Then the cardinal added, “Do not let anyone reduce for you the greatness of the American dream to the level of free contraceptives. We’re worth so much more. The dream is so much bigger.”

Cardinal Wuerl noted that the students had joined together at that night’s Mass “because we share a very different view of life, one that recognizes it truly as a gift from God. Life is something we are meant to embrace and cherish, to live and love.”

The cardinal noted how Pope Francis through his words and actions has demonstrated that all human life has God-given dignity and should be respected.

The cardinal closed his homily by sharing a story of how some years ago he visited a mission in South America, and held a 2-day-old baby whose mother had left him with the sisters because she could not care for him. He noted how the newborn held tightly to his finger, seeming to offer a message to him that he took to heart and shared with the college students: “My brothers and sisters, what you are doing this evening is responding to the call of many, many unborn children. Please be there for me. Please do not let me go. Please speak up for me.”

Students served as lectors and altar servers at the Mass, and the intentions offered included prayers for an end to war, terrorism, abortion, euthanasia, embryonic stem cell research and child abuse. They also prayed that students, faculty and staff at campuses would be given strength “to proclaim the dignity of life in words and deeds.”

Three Georgetown students who had been among the group that had walked to the Mass from their campus said afterward that the liturgy offered an inspiring ending to a challenging week at their university.

Anne Ewing, a Georgetown senior from Louisville, Kentucky, who is a pre-med student majoring in the biology of global health, said, “The thing that stuck out to me most was that life is a gift,” and the importance of “remembering that in your own life every day, it’s a gift you should cherish.” She plans on studying to become an obstetrician.