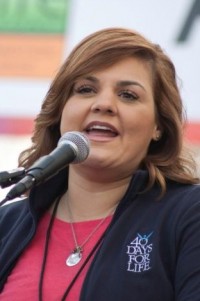 Abby Johnson, a former Planned Parenthood employee of the year who has become an outspoken pro-life advocate, is pictured in a 2011 photo. Johnson told Georgetown University students April 20 that even the most strident abortion provider can have a change of heart. (CNS photo/Jose Luis Aguirre, Catholic San Francisco)

WASHINGTON (CNS) — Abby Johnson, the former Planned Parenthood employee of the year who has become an outspoken pro-life advocate, told Georgetown University students April 20 that even the most strident abortion provider can have a change of heart.

Her address — attended by nearly 100 people — came just hours after a controversial lecture on the Jesuit campus by Cecile Richards, the president of Planned Parenthood.

Noting that the president of the largest abortion provider was invited to speak at the Catholic university, Johnson said, “I keep thinking, I keep believing and I have faith that one day instead of me standing here speaking on defending the sanctity of human life, it will be Cecile Richards standing here.”

Michael Khan, a sophomore at Georgetown and president of the university’s right-to-life chapter, criticized Georgetown University’s defense of having Richards deliver a lecture on campus as an issue of academic freedom and free speech.

“Cecile Richards is not an academic. She is an activist,” he told the Catholic Standard, newspaper of the Washington Archdiocese. “Even if you believe in open dialogue (on the issue of abortion), she brings noting substantive to the table. I am disappointed in Georgetown’s leadership for allowing her (Richards) to speak unchallenged.”

“It is as if they (university officials) are treating both sides of this issue as equal,” Khan added. “I fault Georgetown from the top on down for not instilling a respect for life.”

When Richards’ appearance was announced in early March, university officials said he issue was a matter of “sustaining a forum for the free exchange of ideas … even when those ideas may be difficult, controversial or objectionable to some.”

Johnson’s talk in the campus’ Dahlgren Chapel was part of a “Life Week” offered at the university in response to Richards’ appearance on the campus. “Life Week” events also included a talk on pro-life issues at the end of life, a panel discussion on life affirming alternatives to Planned Parenthood and a Mass for Life celebrated by Washington Cardinal Donald W. Wuerl.

Johnson, a former Planned Parenthood clinic director in Texas, is the mother of five, including one adopted son. She is a convert to Catholicism and is a natural family planning instructor.

Without directly mentioning Richards’ appearance on the Georgetown campus, Johnson noted that she herself was recruited to work for Planned Parenthood when representatives came to her college campus. She said that she was raised in a pro-life home but believed what Planned Parenthood recruiters told her because “I was an easy target for them because I knew nothing about the organization.” “I was told that Planned Parenthood was the only place where low-income women could get health care,” she said. “Planned Parenthood told me that pro-lifers are good people, but they are misguided because they would cause women to have back-alley abortions.”

Johnson worked for the organization in Texas for eight years, eventually becoming a clinic director who was named employee of the year in April 2009.

She said, “I have no silver bullet answer” as to why she continued to work for the organization after it became obvious to her that it was more interested in performing abortions than providing health care to women.

Johnson said that in 2009, she began to question her work at the abortion facility when “I noticed changes in how we treated the underinsured and uninsured women we were supposed care about.”

She recalled that in preparing a budget for the fiscal year, she was told to double the number of abortions her clinic provided.

“I always thought we (Planned Parenthood) were about reducing abortions,” she said.

She said, “We bring the woman in and lay her on the table and start the sedation right away so that the physician does not have to talk to the woman — and we really don’t want her to know what we are doing.”

An ultrasound is performed before any abortion, Johnson said, “to see how far along she is so we could know what to charge her.”

“Ultrasound exposes the lie of abortion and that is another reason we sedate the women — we don’t want them to pop their head up and see that,” Johnson added.

The fetus, she said, is referred to as POC, for “product of conception.” Once the abortion is complete, she said, “the sucked-out tissue is brought to a lab and put in a baking dish and someone makes sure all the body parts are accounted for.”

She said that the body parts and then thrown in a bag and at the end of the day all of the aborted fetus remains are placed in a freezer — jokingly called a “nursery” for later pickup by a biohazard removal company.

“Our goal was to have women on the table, off the table with the abortion completed in five minutes,” Johnson said. She added that abortion providers do not want to talk to the women because that would take up time and “the doctors are paid by the number of abortions (they perform) and not by the hour.”

Her own disillusion began when she was pregnant with her own daughter and continued to participate in providing abortions.

“My baby was a baby because she was wanted,” Johnson said, adding that the Planned Parenthood mentality is, “If a baby is unwanted, it magically becomes just tissue — easily discarded and easily thrown away.”

She said, “The most frequently asked question (by women about to have an abortion) is, ‘Will my baby feel this?’ and we tell them, ‘No.’ ”

“We were given a script with answers to tough questions,” Johnson said. “I had to believe the lie because believing anything else would have been much too difficult.”

Johnson said watching an abortion on ultrasound was what made her decide to quit.

“I remember watching the suction tube going into the uterus and I could see it getting closer and closer to the side of a 13-week-old baby. When it touched his side, he jumped,” she said. “He began flailing his arms and legs as if trying to move away, but there was nowhere to go.”

“As bad as it was seeing a baby dismembered, the worse part was that when I had the opportunity to intervene, to do something, I just stood there. I did nothing,” Johnson added.

It was then, Johnson said, “I realized I’d been lied to by Planned Parenthood, but worse than that, I lied to so many women … I looked them in the face and lied. I hate lying.”

After leaving Planned Parenthood she thought, “What do I say? ‘I’m sorry’ doesn’t seem like enough.” Johnson founded the “And Then There Were None” organization three years ago to help others leave the abortion industry. She said originally her aim was to help about 10 people quit the industry each year, but in last three years, she has help 218 people – including six abortion doctors – to leave.

“My goal is not just to make abortion illegal, my goal is to make abortion unthinkable so that a woman never again darkens the door of an abortion facility or ever thinks that taking the life of an innocent human being is acceptable,” Johnson said.