Burundian Catholic woman honored for her work after ethnic violence 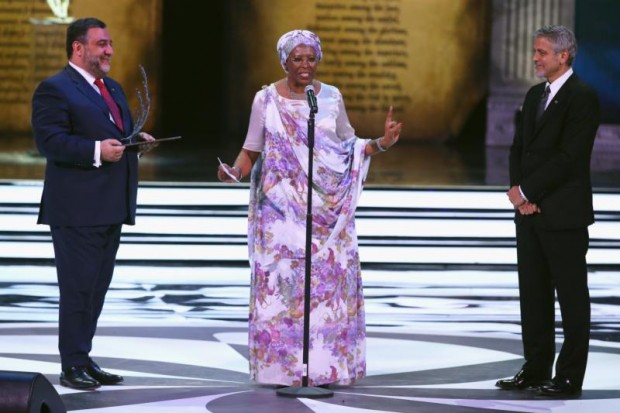 Her public criticism of the leaders she blamed for the violence led to death threats, and finally to life as a refugee in neighboring Rwanda, where she continued to save thousands of lives through her charity work for people fleeing conflict.

Many of her own family and friends were killed in Burundi’s conflict, some “right before my eyes,” she said, but “I had my (Catholic) faith and I kept hearing the Lord’s message, and it was ‘Do not be afraid, I am with you,” Barankitse told Catholic News Service.

“If God had not been with me, I would have probably tried to take my own life,” Barankitse said.

“We need to support each other as a human family, and to say ‘never again!’ No more dictators who oppress the people and receive money and arms from the international community,” Barankitse told CNS. “How is it even possible that these tyrants exist in the 21 century? We must take appropriate measures.”

Her efforts were rewarded April 24 with the $1.1 million Aurora Prize for Awakening Humanity, presented by actor George Clooney at the end of an April 23-24 two-day global gathering in Armenia, set to correspond with commemorations in the former Soviet republic for the 1915 genocide of ethnic Armenians by Ottoman Turks.

“Tonight’s award celebrates heroism and bravery far beyond what most of us could do in a lifetime,” said Clooney, who has been outspoken on the rights of refugees.

Barankitse’s award consisted of a $100,000 grant to further fund her own charity work and another $1 million donated to three other relief organizations of her choosing.

CNS was among the more than 70 local and international media organizations invited to the two-day gathering, along with as many global scholars, peacemakers, human rights activists, aid workers and some former heads of government.

Clooney referred to his ancestors, Irish refugees who had to leave their homeland in search of more secure lives.

“The simple truth is that all of us here tonight are the result of someone’s act of kindness. The Clooney family fled a famine in Ireland to come to the United States where their very survival required a room, a meal, a helping hand,” said Clooney.

In the opening panel discussion, Shirin Ebadi, an Iranian human rights lawyer and her country’s first female judge, said the world’s civil society groups needed to be empowered to better deal with continued refugee crises, especially in the Middle East.

“What happens in one part of the world affects the other,” she said.

Ebadi spoke of the plight of millions of Syrian refugees and accused several oil and gas-rich Muslim nations, including her own, of doing nothing to help them.

“Why aren’t they giving any money,” asked Ebadi, who won the Nobel Peace Prize in 2003.

Some European participants perceived a lack of will on the part of European nations to do more for the world’s refugees.

“Within the context of a Europe that seems to some extent to be denying and undermining its own foundational values and principles … where else do we look to for that moral authority and that sense of the dignity of the person first and foremost?” asked Eamonn Meehan, executive director of the Irish Catholic aid agency, Trocaire.

Pope Francis has shown “real moral leadership” by visiting refugees held in a Greek camp and by bringing some of them back with him to Rome, Meehan told CNS.

“I think there is a message there for our political leaders,” he added.

Several participants drew parallels between the techniques used by the militant group Islamic State in parts of war-torn Syria and Iraq and those used in the 1915 Armenian genocide, which most historians agree killed anywhere from 800,000 to 1.5 million Armenians. Turkey has always disputed such figures.

“When you read the stories, the accounts of what happened … the efforts to destroy, for instance, religious institutions, the kind of kidnapping of children, of women, forcible conversion … that is something that is being done in our own day,” said Steven Luckert, a senior program curator at the U.S. Holocaust Memorial Museum in Washington.

The Aurora gathering and the award ceremony were held under the auspices of 100 LIVES, a project founded by Armenian philanthropists that aims to share stories of survivors and those who save them.

During the gathering, thousands of Armenians commemorated those killed in 1915. They flocked to Yerevan’s genocide memorial and told stories of family ancestors who’d perished.

Minas Halaj, who immigrated to California in 2002 but was temporarily back in Armenia, said he was named for his grandfather, Minas, who had seen “his whole family being killed by Turks in 1915.”

“It is a sad story that we live in the 21st century (and) still we see that genocide is happening worldwide,” he said.

He cited the war in Syria and Armenia’s ongoing conflict with neighboring Azerbaijan over the disputed Nagorno-Karabakh region.

“The fact is … that innocent people are dying,” he said.

Other finalists for the Aurora Prize were Tom Catena of Mother of Mercy Hospital in the Nuba Mountains of Sudan; Syeda Ghulam Fatima, general secretary of the Bonded Labor Liberation Front in Pakistan; and Father Bernard Kinvi, a Catholic priest in Bossemptele, Central African Republic.

These three contenders were honored for their humanitarian work with grants of $25,000.