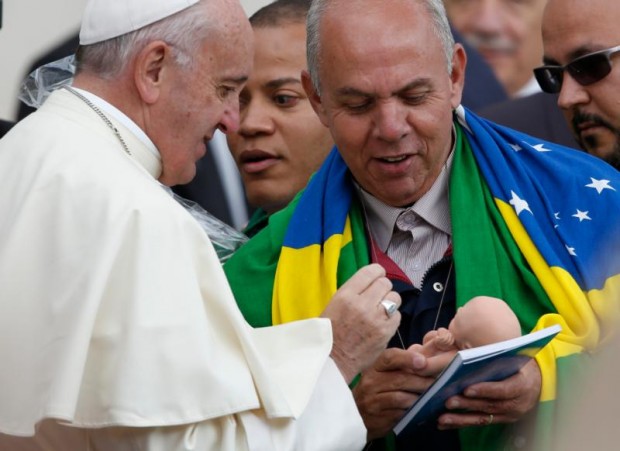 Pope Francis prepares to bless a model of a fetus during his general audience in St. Peter's Square at the Vatican April 27. (CNS photo/Paul Haring)

VATICAN CITY (CNS) — To ignore the suffering of another person is to ignore God, Pope Francis said.

And going to church does not automatically make someone love their neighbor, the pope said April 27 as he reflected on the Gospel parable of the good Samaritan during his weekly general audience.

By describing the priest and the Levite who passed by without offering help, Pope Francis said, the parable makes it clear that “it is not automatic that one who frequents the house of God and has known his mercy knows how to love his neighbor.”

Pope Francis insisted there is no such thing as “true worship if it does not translate into service to one’s neighbor. Let us never forget: in the face of the suffering of so many people worn out by hunger, violence and injustice, we cannot remain spectators.

“To ignore human suffering — what does that mean? It means ignoring God,” he told an estimated 25,000 people in St. Peter’s Square. “If I do not draw near to the man or woman or child or older person who is suffering, I cannot draw near to God.”

While the priest and the Levite — the two orthodox religious figures in the story — have “closed, cold” hearts, the pope said, the Samaritan, who was considered an impure pagan, had a heart that was “synchronized with the heart of God.”

The sign that one is close to God, the pope said, is showing compassion to others like God shows compassion to us. “What does that mean? He suffers with us. He feels our suffering.”

Like the good Samaritan, he said, God “does not ignore us. He knows our pain. He knows how much we need his help and consolation. He draws near to us and never abandons us.”

Pope Francis asked those at the audience to consider whether they believe that God has compassion for them, as they are — with their sins and their wounds — and that he “draws near to us, heals us, caresses us. And if we refuse him, he waits. He is patient and always alongside of us.”

NEXT: Burundian Catholic woman honored for her work after ethnic violence