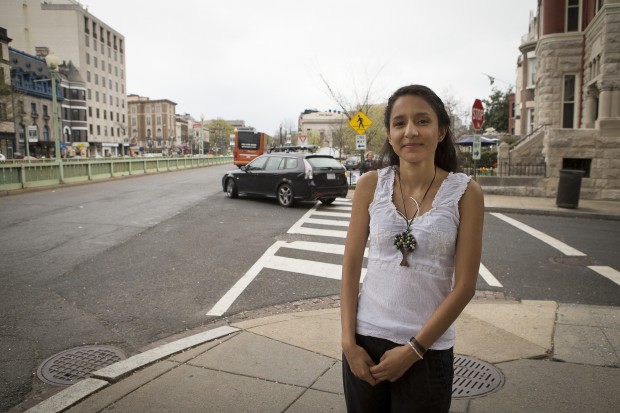 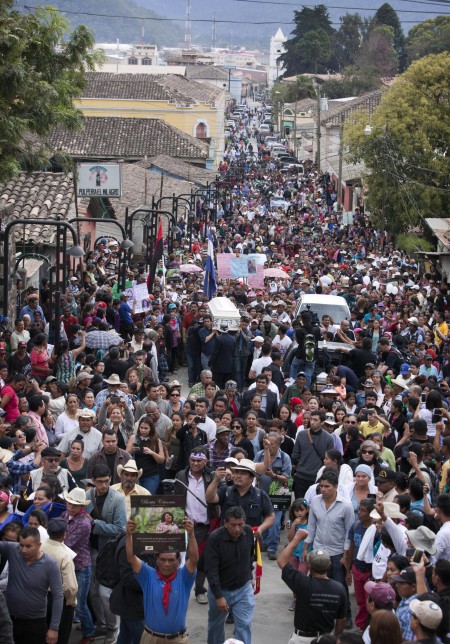 The 25-year-old university student said during a visit to Washington that the Honduran government cannot be trusted to investigate the killing because authorities had “persecuted my mother and criminalized her.”

“We are asking for an independent commission of experts because we don’t trust the public prosecutors’ office in Honduras,” Bertha Caceres told Catholic News Service in an interview at the offices of the Center for Justice and International Law.

“The goal is to put some pressure to make our voices heard, by Honduras because they’re washing their hands after the martyring of people. We want the voices of the victims to be heard by the government. They have not attended to the public request (for an investigation) made right after the assassination,” Bertha Caceres said through a translator.

Berta Caceres, who founded the Council of Indigenous Peoples of Honduras in 1993, was murdered in her home in La Esperanza early March 3 in what police initially called an attempted robbery. The Lenca indigenous leader was internationally known for her opposition to the Agua Zarca hydroelectric dam on the Gualcarque River in western Honduras and, for her efforts, won the 2015 Goldman Environmental Prize, an award considered the Nobel for ecological actions.

On a whirlwind four-day visit to the nation’s capital, Bertha met with human rights groups and was to join vigils April 5 at the World Bank and the Inter-American Commission on Human Rights to remember Berta Caceres and reiterate the call for an independent investigation.

The human rights commission raised concerns about Berta Caceres’ safety with Honduran President Juan Orlando Hernandez in 2015 and called on the government to take “precautionary measures” to protect her.

Bertha, the second of Caceres’ four children, said that in the month since her mother was killed, her family has not heard from the government on the status of its investigation. A statement released April 4 by the Caceres family said requests for information about the investigation “have been denied without explanation.”

Bertha Caceres charged that investigators had “altered the scene of the crime.” She also criticized the detention of environmental activist Gustavo Castro Soto, who witnessed the assassination. Soto, who was shot twice during the attack, was released from Honduran custody April 1 and returned to Mexico.

Bertha Caceres said the U.S. can influence the Honduran government to seek an independent investigation by the Inter-American commission.

“We believe this is an opportunity because Honduras, on multiple occasions, has been singled out for human rights violations and its inability to tackle adequate protections for human rights defenders,” she told CNS. “It’s an opportunity to realize something different, to set a precedent in that it should be known and understood how national corporations with international funding are operating in Honduras.”

“My mother was a defender of life, so an assassination like that should be painful to the entire world,” she said. People must care what happens in other countries; “that’s why international solidarity exists.”

“We are fighting for the common goods of nature. This is not a benefit of indigenous people or whoever is in that territory. It’s for (the) benefit of everyone.”

The soft-spoken Bertha Caceres noted that her family received a letter of condolence from the Vatican after her mother’s death, but that they have heard nothing from the Honduran Catholic Church.

“The church, in the person of Cardinal Oscar Rodriguez Maradiaga, has had a terrible role in response to the struggle of the Lenca people,” she said.

The indigenous rights council repeatedly has approached the Honduran government with its concerns about the Agua Zarca dam project, beginning in 2006 when construction crews showed up unannounced along the Gualcarque River. Unsatisfied with the lack of government response for years, the council turned to the international community for support, citing the destruction of sacred Lenca land, the displacement of people and threats to activists.

Synohydro, a partner in the project and the world’s largest dam developer, subsequently dropped out, leading to a suspension of the project. The developer, Honduran energy company DESA, then relocated the project a mile upstream. The indigenous rights council continues to oppose its construction.

Bertha Caceres’ sister, Laura Zuniga Caceres, was in Washington for a March 23 congressional briefing on the assassination and threats to activists. She said her mother had received 33 threats between 2013 and 2016 related to her opposition to the hydroelectric project.

She said Honduran authorities suggested that an internal conflict within the indigenous council led to her mother’s death, but she dismissed such a claim, saying that indigenous rights activists have been beleaguered by state and private security forces for years.

Since Berta Caceres’ death more than 60 members of Congress have asked Secretary of State John Kerry to review security aid to Honduras and to seek an investigation into the deaths of Honduran environmental and human rights leaders.

NEXT: God excludes no one from his love; offers mercy, not hate, pope says