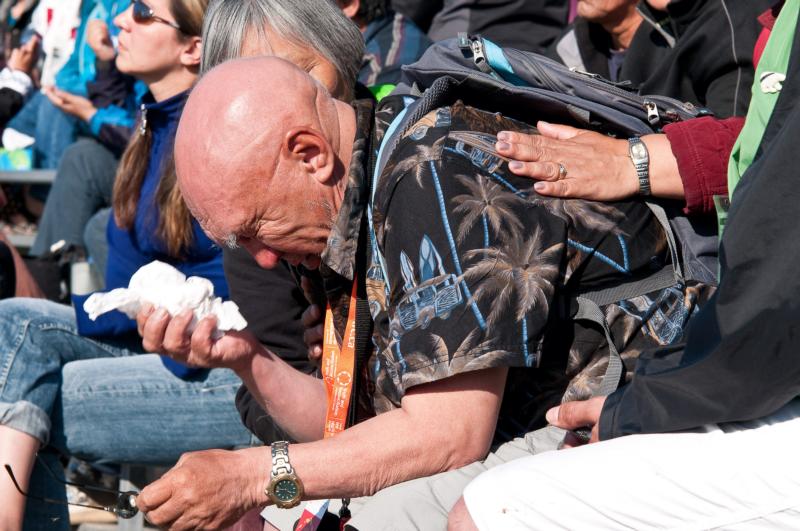 A man breaks down during opening ceremonies as Canadas Truth and Reconciliation Commission prepares to hear testimony in Inuvik, Northwest Territories, in 2011. Canada's apostolic nuncio says Pope Francis is considering a Truth and Reconciliation Commission request for an apology in Canada for the Catholic Church's role in Indian residential schools. (CNS photo/ Michael Swan, The Catholic Register)

OTTAWA, Ontario (CNS) — The apostolic nuncio to Canada said Pope Francis is considering an invitation for a visit, during which many Canadians hope he would apologize for the Catholic Church’s role in running Indian residential schools.

“The pope has received this invitation, this request, from the First Nations,” said Archbishop Luigi Bonazzi, nuncio. “He is considering it.”

The Truth and Reconciliation Commission of Canada — set up to discover what happened in the government-funded, church-run residential schools, issued 94 calls to action last year. One was for the pope to apologize — on Canadian soil — for the Catholic Church’s role in Indian residential schools.

“We heard many survivors say, ‘My church has not apologized to me,'” Marie Wilson, a commission member, said at an Ottawa news conference March 30.

Asked if an apology from Pope Francis would be enough, she responded, “I’m certain it won’t be enough. It’s all just movement forward.”

“No one thing will be perfect for everyone,” she said. “But we have to keep trying.”

Wilson acknowledged that many bishops and Catholic organizations have apologized over the years, but many of the 7,000 witnesses who testified before the Truth and Reconciliation wanted “a corporate response.” Because the Catholic Church in Canada is made up of different dioceses and entities, a single Catholic response has not been possible.

“We, all of us, have inherited this,” she said of Canadian church history. People are “still struggling over” it.

Last June, the office of then-Canadian Prime Minister Stephen Harper said he discussed the truth commission’s calls to action when he met at the Vatican with Pope Francis. The national chief of the Assembly of First Nations had asked Harper to raise the issue with Pope Francis and ask the pope for the public apology.

In response to a recommendation from last year’s Truth and Reconciliation report, which asked faith groups to build a framework of reconciliation based on the 2007 U.N. Declaration on the Rights of Indigenous Peoples, the Canadian Conference of Catholic Bishops released a document March 29 that outlines several steps that can be taken to inspire Catholics to right past wrongs through a “practical commitment to heal enduring injustices.”

The bishops said they had no problem reaffirming their support of the U.N. declaration, stating “its spirit can point a way forward to reconciliation between indigenous and nonindigenous people in Canada.”

The conference also released a document that, like previous church documents and statements, repudiated “illegitimate concepts and principles” reflected in the 15th-century Doctrine of Discovery. That doctrine was used to justify “seizure” of land from indigenous peoples dating back to European settlement of North America.

“I just hope more of our church and Canadians in general educate themselves about these issues,” said Archbishop Murray Chatlain of Keewatin-Le Pas, whose diocese is made up of 83 percent First Nations and Metis peoples.

“Some of the philosophies and cultural practices” that went into Canada’s founding did not make a “level playing field at all” for indigenous peoples, he said.

The bishops’ documents outline several steps to guide their organizations and inspire all Catholics to right past wrongs by a “practical commitment to heal enduring injustices.”

These include efforts to make sure Catholic institutions tell a truthful history of the encounter with indigenous peoples, such as the effects of the residential school system, and the impact of ignoring or undermining treaties. The steps also include: making interaction with indigenous communities part of ecumenical and interreligious dialogue; acting to improve holistic health services; promoting a restorative justice model to combat the high incarceration rate of these communities; supporting the national inquiry into missing and murdered indigenous women; helping indigenous communities build educational programs to promote their culture and experience; and for the bishops and other Catholic faith leaders to invite lay Catholics to reflect on the U.N. Declaration on the Rights of Indigenous Peoples so it might be supported and implemented.

The Truth and Reconciliation Commission was established under the 2007 Indian Residential Schools Settlement Agreement. The schools were established and paid for by the Canadian government in the late 1800s, but were administered by church organizations of several religions, including the Catholic Church, which ran about 60 percent of them.

The truth commission’s mandate included creating a public record of the tragedy of Indian residential schools and examining the ongoing fallout of a 130-year policy that separated 150,000 native children from their families. By witnessing the stories of many of the 80,000 survivors and documenting the cultural and societal devastation to families torn apart, the commission said it hoped to cultivate reconciliation between aboriginal people and the rest of Canada.

The commission’s 94 recommendations in the June report covered a spectrum of aboriginal rights, including those concerning health, education, languages, equity in the legal system, and reconciliation. It called for increased funding and support for substance abuse treatment, some of which was funded by the residential schools settlement agreement.

NEXT: Daughter of slain Honduran activist calls for full investigation of death