From nightmare to dream: Syrian refugees thank pope for safety 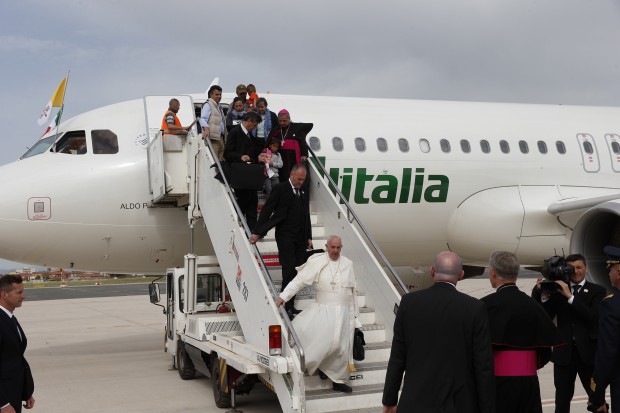 Pope Francis is followed by Syrian refugees as he disembarks from this flight from the Greek island of Lesbos at Ciampino airport in Rome April 16, 2016. (CNS photo/Paul Haring)

ROME (CNS) — After less than 48 hours in Rome, “dream” is the word used most often by the six Syrian adults Pope Francis brought back to Italy with him from a refugee camp in Greece.

By April 18, the couples — who asked to be identified by only their first names, Hasan and Nour, Ramy and Suhila, Osama and Wafa — and their six children had spent more than three hours doing paperwork with Italian immigration officials and had enrolled in Italian language classes.

Other than that, most of their first two days in Rome had been spent giving interviews and answering phone calls from friends and relatives who saw them on television boarding the pope’s plane April 16. All three families saw their homes bombarded in Syria and all three arrived in Greece from Turkey on overloaded rubber boats months ago.

Being chosen from among thousands of refugees to come to Italy felt like “a dream,” said Wafa. Being in Rome and not a refugee camp on the Greek island of Lesbos “is a big dream,” said Hasan.

Osama is dreaming of peace in his homeland. “We want peace in Syria so we can go home,” he told reporters outside the language and culture school run by the Catholic Sant’Egidio Community.

In agreement with the Italian government, the Rome-based lay community, along with the Federation of Evangelical Churches in Italy, has been operating a “humanitarian corridor” for vulnerable Syrian refugees — the elderly, families with sick children, women traveling alone with their children. The Vatican asked Sant’Egidio to help it screen refugees in Greece and choose families that both the Greek and Italian governments would provide with the necessary travel papers in time for the papal flight.

Daniela Pompei, coordinator of Sant’Egidio programs for migrants and refugees, said the Greek government insisted that they choose only refugees who arrived in Greece before March 20, when an agreement between the European Union and Turkey went into effect. Under the terms of the agreement, new arrivals must apply for asylum and will be taken back to Turkey if their requests are denied.

The two Christian families originally on the list for inclusion in the papal flight had made the sea crossing from Turkey after March 20, she said.

Asked if his gesture was not really so small as to be insignificant, Pope Francis told reporters flying to Rome with him and the refugees that people used to tell Blessed Teresa of Kolkata that what she was doing was meaningless when there was an ocean of need in the world.

“And she responded, ‘It’s a drop in the ocean, but after this drop, the ocean won’t be the same,'” the pope said. “I’ll respond the same way. It’s a little gesture. But all of us, men and women, must make these little gestures in order to extend a hand to those in need.”

Osama said he was told at 10 p.m., April 15 that he, his wife and children — Omar, 6, and Masa, 8 — would be flying to Rome with Pope Francis the next day. Hasan said he was in a grocery store in Greece when he got the call.

When asked what he thought of the head of the Catholic Church sponsoring three Muslim refugee families, Osama said, “Peace has no religion. If you think about it, we are all human.

“The pope made a humanitarian gesture and it was so moving,” he told reporters.

Nour, an engineer who studied in France and hopes eventually to go there, responded to a similar question by saying, “No other religious leader in the world helped us like the pope did.”

Her husband, Hasan, said, “The pope is an amazing, amazing person, an incredible person. Every religious person should be like the pope.

“We are Muslim and, unfortunately, our people did not deal with us like the pope did,” he said.

Hasan and Nour decided to take their 2-year-old son Riad and flee after they were stopped by members of the Islamic State. Hasan said he was told he must fight, “make jihad,” but “I didn’t want to kill anyone. I am an engineer, not a soldier, so I must escape from Syria.”

He, too, dreams of peace, safety and a dignified life for his young family. But also of seeing his homeland again.

Ramy, who was a teacher in Syria and has two teenage sons and a 5-year-old daughter, said being chosen to come to Italy “was God’s blessing.”

NEXT: Young nun, postulants among hundreds of Ecuador earthquake victims