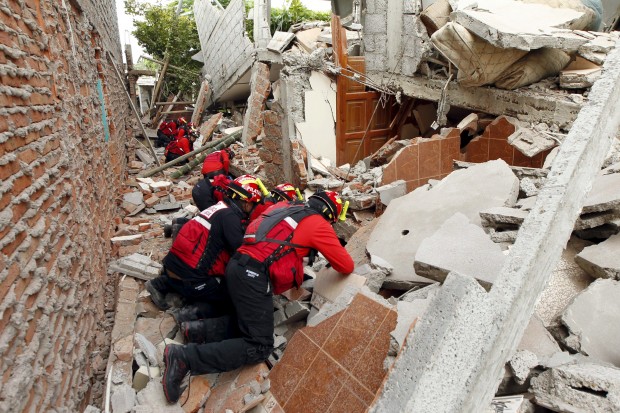 Firefighters search for survivors in Manta, Ecuador, April 17 after an earthquake struck the previous day off the country's Pacific coast. At least 272 people died, nearly 3,000 were injured and thousands were left homeless in the magnitude-7.8 earthquake. (CNS photo/Guillermo Granja, Reuters)

WASHINGTON (CNS) — Six members of the Servant Sisters of the Home of the Mother, including a young nun from Northern Ireland, are among the dead in the strongest earthquake to strike Ecuador since 1979.

Sister Clare Theresa Crockett, 33, of Londonderry, died while leading children to safety in a school at Playa Prieta, where she was teaching the youngsters to play the guitar, according to the Spain-based order.

Her body was found under rubble April 18, about 36 hours after the magnitude 7.8 earthquake struck the Pacific Coast region of the country.

Five Ecuadorean postulants also died in the collapse. The order identified them by their first names: Jazmina, Maria Augusta, Maira, Valeria and Catalina.

The six women were among at least 272 people who died in the massive earthquake that struck communities in the northern part of the country. Authorities reported that nearly 3,000 people were injured and that an unknown number of buildings were destroyed or damaged.

Catholic Relief Services, the U.S. bishops’ relief and development agency, was partnering with local relief organizations to determine how best to respond in the communities most affected by the temblor. Water, food and emergency shelter are the biggest needs, the agency said on its website.

“Some of the poorest provinces are located near the coast and we expect thousands of people to need immediate help,” Tom Hollywood, CRS’s representative for South America said in a statement.

Some of the hardest-hit communities in the earthquake zone, including in Esmeraldas and Manabi provinces, were inundated with rain and flooding in the days before the disaster, making them prone to potential landslides and complicating the relief effort, the agency said. 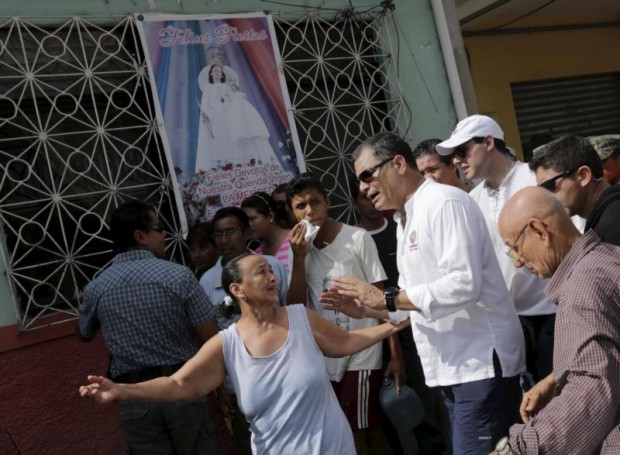 Ecuador’s President Rafael Correa speaks with residents April 18 in Portoviejo after an earthquake off the country’s Pacific coast. At least 272 people died, nearly 3,000 were injured and thousands were left homeless in the April 16 magnitude-7.8 earthquake. (CNS photo/Henry Romero, Reuters)

“It’s been really difficult to get in touch with our local partners,” Hollywood said, explaining that communications networks are down or working intermittently. “Last night, even here in Quito, the whole network collapsed.”

Pope Francis sent words of condolence to Ecuador and Japan after praying the “Regina Coeli” with pilgrims gathered in St. Peter’s Square April 17.

Japan’s Kyushu region was shaken by a pair of strong earthquakes April 16 and 17, which killed 41 people, injured hundreds and forced 180,000 people from their homes.

The Ecuadorean bishops’ conference offered prayers for the victims in an April 17 statement sent to the Vatican’s Fides news agency.

“Our thoughts go especially to our brothers and sisters in the provinces of Manabi and Esmeraldas, who seem so far to be the most affected, and we invite everyone to participate in the national collection for the victims in order to help in their most urgent needs,” the statement said.

Sister Clare’s family described her as a “superstar,” while friends said she lit up a room when she entered, reported the Belfast Telegraph in Northern Ireland. A relative told the Derry Journal she was “a diamond of the family” who died as she lived, “helping people.”

The Independent daily in London reported that Sister Clare wanted to be an actress and wrote and acted in local theater productions. She admitted to spending her weekends drinking and attending parties before joining the Sister Servants of the Home of the Mother. She discovered the religious order by accident when she signed on for a free 10-day trip to Spain, thinking it was a chance to party. After learning it was a pilgrimage with mostly middle-aged women to the order’s 16th-century monastery, she tried to back out, but ended up attending and discovered her religious vocation.

The order said in a statement that it mourned the loss of its six members, but realized that “death is not the end of the path.”

“Sister Clare had spent nearly 15 years of her life in consecration to the Lord. She was a generous sister with a special gift for reaching out to children and young people,” the order said.

“The postulants had entered the order just a year ago and were generously preparing themselves to become Servant Sisters. And the Lord found them all prepared,” the statement said.

Three other sisters and two postulants in Playa Prieta were injured in the building collapse. They suffered various injuries, including broken bones and bruises, but none of the injuries was life threatening, the order said.