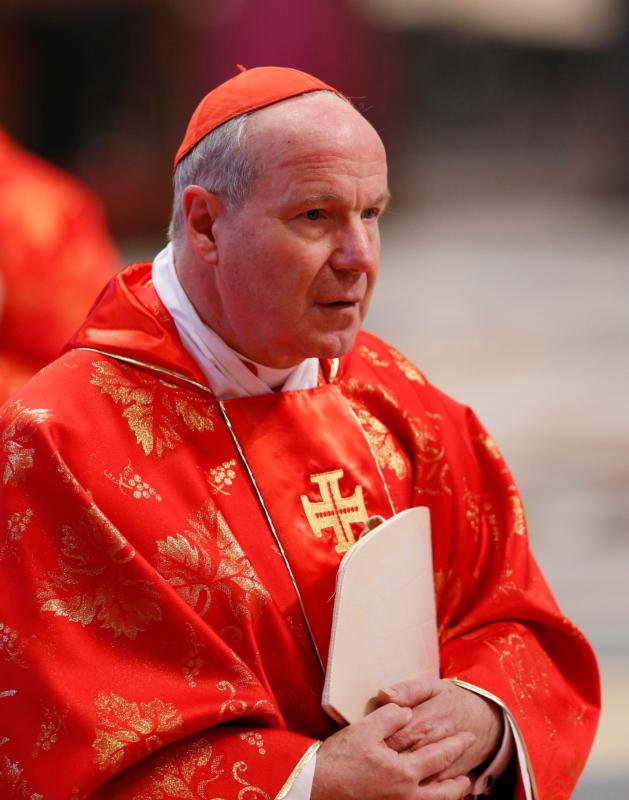 ROME (CNS) — By sending his son into the world to suffer and die, God used an “excess of mercy” to vanquish human beings’ lack of mercy, said Austrian Cardinal Christoph Schonborn.

The cardinal, archbishop of Vienna, opened the European gathering of the World Apostolic Congress of Mercy March 31 in Rome. The gathering was scheduled to culminate with participants joining Pope Francis at a prayer vigil April 2 and Mass April 3 for Divine Mercy Sunday.

“The opposite of mercy is hardness of heart,” something which is seen today as it was in Jesus’ time and which impacts people, within the church and in society, Cardinal Schonborn told the congress.

The cardinal, who had just returned from a visit to refugees in northern Iraq, told congress participants, “We in Europe are living this kind of situation. Instead of welcoming (refugees), we are making iron curtains.”

The wars in Syria and Iraq and the refugee crisis impacting neighboring countries in the Middle East and the European Union, he said, all can be traced to a desire for vengeance after the 9/11 terrorist attacks in New York and Washington. “The Christian refugees I visited yesterday are precisely the consequence of the reaction to 9/11,” he said.

When the human heart dies, it becomes hardened, he said, and a hard heart loses its connection to God and its ability to feel compassion for others.

The Gospel parable of the man healed by Jesus on the Sabbath shows that the Pharisees, who believed themselves to be faithful and religious men, “harden in the face of mercy,” he said. Eventually, “they believe they are honoring God by killing Jesus.”

“We often have hard hearts,” he said. “We priests, we pastors are threatened by the hardness of heart that can insinuate itself in our lives. That is how priests become ‘wolves’ and many cardinals become ‘devils.’ That’s not me saying it, St. Catherine of Siena said it more than once.”

Mercy, the cardinal said, has two conditions: the truth and repentance.

Self-concern and self-justification close the heart to others and to God quicker than anything, he said. And nothing opens it quicker to God’s mercy than a recognition of one’s sin.

Cardinal Schonborn said the Gospel story of Jesus’ meeting the Samaritan woman illustrates how essential recognizing the truth is, both for showing authentic mercy and for accepting it. Jesus is plainspoken: “You are right in saying, I do not have a husband,” Jesus tells her, “for you have had five husbands, and the one you have now is not your husband.”

“‘The truth will set you free,’ he says on another occasion. Without the truth, one cannot experience Jesus’ mercy,” the cardinal said. “But it must be truth in its proper form. One must speak the truth without injury.”

Cardinal Schonborn, whom the Vatican has asked to help present Pope Francis’ postsynodal exhortation on the family April 8, said that at a parish visit a man told him, “‘Cardinal, the church is without mercy for we who are divorced and remarried.’ And I responded, ‘Look, it’s true that for us pastors it would be easier to say, ‘Do what you want,’ but there is an obstacle, which is the teaching of Jesus. And I quoted this, ‘Anyone divorces his wife and marries another commits adultery.'”

The man turned pale, the cardinal said. “I understood that this word of Jesus touched him because he had committed adultery. All of a sudden, it was no longer the church that lacked mercy, but it was he who lacked mercy toward his wife and he betrayed her.”

In the life of Jesus and still today, Cardinal Schonborn said, “to our lack of mercy, the Lord responds with even more mercy. We see it in the case of the ‘good thief’ who converts in extremis,” when he, too, is dying on a cross.

“God so loved the world that he gave his only begotten son,” the cardinal reminded congress participants. “God’s mercy is not the consequence of our good actions, as if it were a reward; the mercy of God is the cause of our conversion.”

Cardinal Walter Kasper, retired president of the Pontifical Council for Promoting Christian Unity, also addressed the congress, saying that with all the evil and injustice in the world, God’s mercy is the only explanation for the world’s continued existence and the ability of people to continuing living with hope.

“God, in his mercy, exercises his omnipotence with tenderness, with an embrace and a caress,” he said April 1. “God never forces us, but courts us with great respect and with a meek and farsighted patience.”

Cardinal Kasper urged congress participants to cultivate a “spirituality of open eyes,” one that seeks Jesus in the faces of those who are poor and in pain.

A church formed of people living with their eyes open, he said, reaches out “not with a moral finger raised, but with a hand extended.”

Such a church, the cardinal said, “knows that it is not possible to speak of God whose name is mercy without living mercy.”

NEXT: Less than 1 percent of Central American kids granted asylum in Mexico