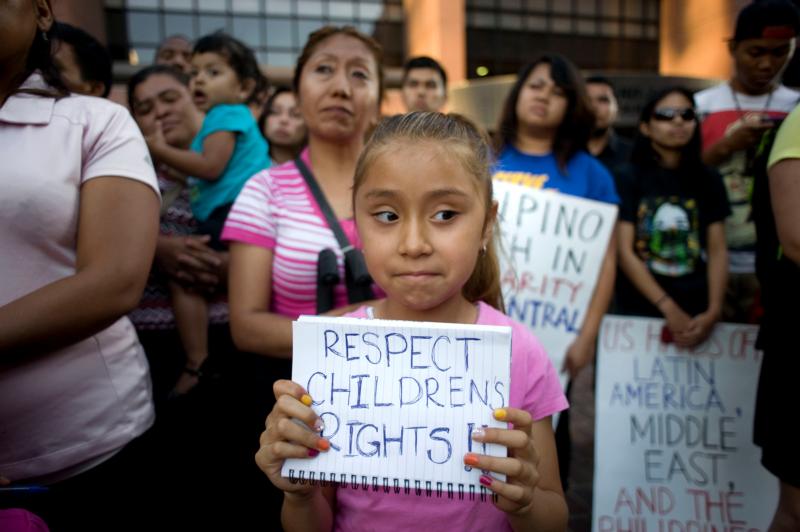 A girl holds a sign during a 2014 vigil and rally in support of the flood of undocumented Central American minors apprehended along the U.S.-Mexico border. A new report says less than 1 percent of Central American children apprehended by Mexican immigration officials are able to obtain asylum in Mexico. (CNS photo/David Maung, EPA)

MEXICO CITY (CNS) — Less than 1 percent of Central American children apprehended by Mexican immigration officials are able to obtain asylum in Mexico, even though they often are fleeing violence and forced recruitment into gangs, according to a new report.

The March 31 report from Human Rights Watch said Mexico failed to follow its own rules for handling migrants, even as it has increased its immigration enforcement in the aftermath of an outflow of unaccompanied minors from Central America trying to reach the United States in 2014.

“On paper, Mexican law appears to provide every protection for children who have fled their home countries in fear of their lives,” said Michael Bochenek, senior children’s rights counsel at Human Rights Watch. “But only a handful actually receive asylum, reflecting that … the government is not giving adequate consideration to their claims.”

The directors of shelters for migrants affiliated with the Catholic Church or run by priests and religious say the study squares with their experiences in service to Central Americans moving through Mexico.

“There’s a rise in the practice of not recognizing persons who might be able to request asylum,” said Jose Luis Manzo, director of the migrant shelter in the northern city of Saltillo.

Migrants transit Mexico regularly, but often are attacked by kidnappers and preyed up by police acting in cahoots with criminals. The Mexican government introduced an initiative in July 2014 known as the Southern Border Plan, which it said would make migration safer by establishing new checkpoints and no longer allowing migrants to steal rides on northbound trains. It also increased detentions and deportations.

Critics say the plan has made migration less safe as migrants are forced to pay higher prices for smugglers or abandon the known paths through the country in search of routes through rugged terrain not patrolled by police, but prone to violence by criminal groups.

“Organized crime is benefitting” from the Southern Border Plan, said Jose Luis Lopez, a lawyer at the Saltillo shelter. “Migrants seek out other paths and put their lives at risk. They’re more hidden now and at the mercy of criminals.”

The children applying for asylum often are unable to navigate the system or receive assistance, the report said. Lopez added that many children are heading north to join families already in the United States or have trips paid for by relatives in the U.S. and are not interested in seeking asylum — a reason cited by Mexican officials for children not making requests.

Only one of the 61 children interviewed for the report was advised of their right to seek asylum — something required under Mexican law, the Associated Press reported. The Human Rights Watch report also said Mexican officials warned children of long waits if they did apply for asylum.

“It is a long process” and the conditions in the migrant stations where the children are held during their application periods are not ideal, Lopez said.

Many prefer to request “humanitarian visas,” which are quicker to obtain, granted more often and last for one year, Lopez said.

The report found most children apprehended in southern Mexico were kept in detention centers, instead of being sent to shelters run by the country’s family development institute.

Migrants, including children, have streamed out of Central America for decades, but the flow has increased in recent years as violence related to drug and gang activity increased. Honduras and El Salvador have both held the dubious distinction of having the world’s highest homicide rate this decade.

In a statement March 31, Mexico’s National Immigration Institute said all children are advised of their rights “without exception” when detained and are offered the opportunity to seek asylum.