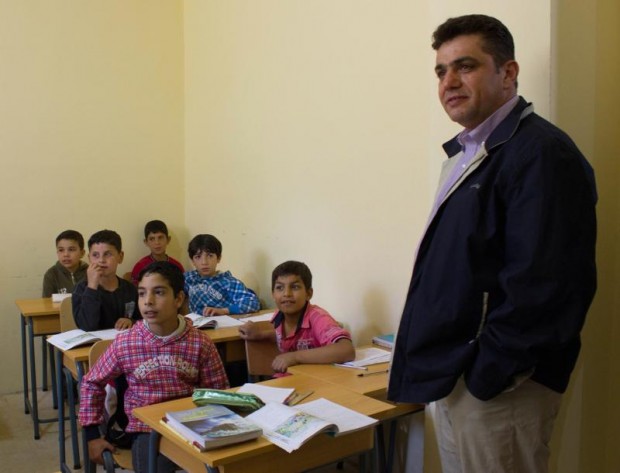 Father Nawras Sammour, Jesuit Refugee Service's Syria director, visits the JRS school for Syrian children in Lebanon's Bekaa Valley in 2013. With a campaign called "Mercy in Motion," JRS is trying to raise $35 million this year so that by 2020 it can educate an additional 100,000 refugees per year. (CNS photo/Zerene Haddad, courtesy JRS)

TORONTO (CNS) — Jesuit Refugee Service has a very specific answer to Pope Francis’ call to put mercy on the leading edge of a church reaching out to the peripheries. The answer is education.

With a campaign called “Mercy in Motion,” JRS is trying to raise US$35 million this year so that by 2020 it can educate an additional 100,000 refugees per year.

Jesuit Refugee Service has more than 150,000 students in its educational programs around the world, but that’s not much in a world with 60 million people living as refugees or at risk of becoming refugees. The U.N. High Commissioner for Refugees says 51 percent of the refugees are under the age of 18.

The refugees who will shape the 21st century are all over, not just in the Middle East, Jesuit Father Tom Smolich, JRS International director, told The Catholic Register.

“People are realizing now, finally, it really is a global phenomenon,” said the Jesuit from Sacramento, California, who is currently stationed in Rome. “This is not about Syria and Europe. This is a whole interconnected reality.”

“Education is the real game changer. If the average stay in a refugee camp is 17 years, what are you going to do with those 17 years?” Father Smolich asked. “We’re trying to respond to needs — trying to respond as part of the church doing that … that, to me, makes sense, whether Pope Francis calls a Year of Mercy or not.”

In Syria — where the Jesuits have deep, historical ties — JRS finds itself doing education and more.

“We’re playing, I think, a very distinctive role in Syria. We’re one of the few NGOs who are actually in Syria,” he said. “Part of our goal and our way of working is that we don’t see this response (to the refugee crisis) as a sectarian response. We serve Muslims. We serve Christians. Our staffs are made up of Christians and Muslims. Our goal here is that eventually this war will end. Eventually, Christians and Muslims will be working together in Syria again. How do we start laying the seeds for that?”

Every JRS education program includes a psychosocial component because every JRS school is trying to teach traumatized, displaced children. In Lebanon, that means a social worker in every school and program.

Online courses designed and delivered from the Jesuit network of universities in the United States have enabled JRS to dramatically expand its offerings to post-secondary refugee students, but the critical need is with younger children where a human, interactive process of teaching and learning is more important than content delivery, Father Smolich said.

For refugees who have been treated as objects and obstacles by regimes, armies, border guards and officials, healing begins by humanizing their experience. Father Smolich said he wants refugee schools to be places of human encounter.

“Pope Francis is onto something here. You start with the encounter,” he said. “The church is at the frontiers. We figure out what to do based on that encounter.”

Math class in a refugee camp does not solve all the problems, but it does solve some of them.

“I hope it gives them a sense of stability. I hope it gives them access to jobs. I hope access to some future beyond being moved from camp to camp when the going gets tough,” said Father Smolich. “What’s the cumulative effect of that? I don’t know. But it’s better than not doing anything. I’m hoping a small group of educated people will grow and grow and grow and perhaps bring something different.”

Swan is associate editor of the Toronto-based Catholic Register.

PREVIOUS: In Britain, disagreement over effects of gender-neutral facilities

NEXT: Pope prays for Orthodox, Catholic Christians kidnapped in Syria