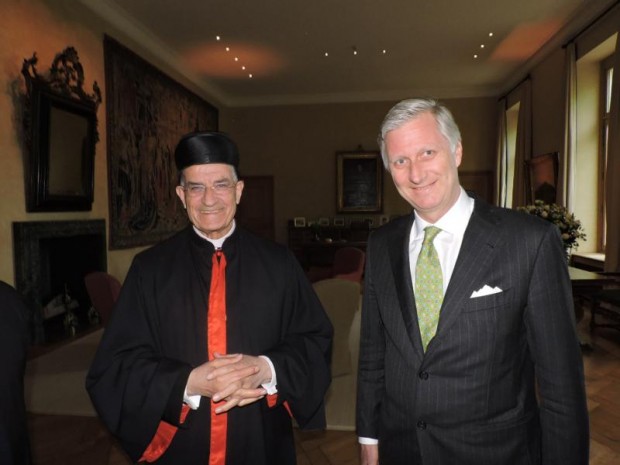 Lebanese Cardinal Bechara Rai, patriarch of Maronite Catholics, poses with King Philippe of Belgium at the king's residence April 27 in Brussels. In a speech to the European Parliament in Brussels, Cardinal Rai called for an end to wars and conflicts in the Middle East and for a return of the displaced to their countries of origin. (CNS photo/Bkerke, Maronite Catholic patriarchate)

BRUSSELS (CNS) — Lebanese Cardinal Bechara Rai urged the international community and the European Parliament to stop the wars in the Middle East through dialogue, and he called for a return of the displaced to their countries of origin.

In a speech April 27 to the European Parliament in Brussels, the Maronite Catholic patriarch warned that the crisis in the region has direct consequences not only for Christians, but also for the Mediterranean Basin as well as Europe.

He said the region’s conflicts and wars must stop and that Palestinian refugees and displaced Iraqis and Syrians should “return to their own countries to preserve their own identities.”

“The rise of Islamic fundamentalism and the growth of terrorist organizations may remove the Muslim moderation that Christians and Muslims in this region have patiently built over 1,400 years of living together” the cardinal said, adding that Christians are the guarantors of this moderation.

“We absolutely must not give this land to fundamentalists and leave (an) open field to terrorist organizations. This would threaten world peace,” he said.

If the region had a durable peace, Cardinal Rai said, it would allow “Eastern Christians to hope for a better future and encourage them to stay in their land, preserving their positive influence.”

The region’s conflicts and wars are taking a toll on Lebanon, where the Maronite Patriarchate is based.

Cardinal Rai reminded the European Parliament that Lebanon is threatened — economically, socially, culturally, politically and security-wise — by the presence of 2 million refugees and displaced people. Instead of 4 million people living in a country of 4,036 square miles, now 6 million live there.

The 2 million includes 500,000 Palestinian refugees who “await in vain for a solution to their cause since 1948” as well as 1.5 million displaced Syrians whose presence increases every year with 40,000-50,000 new births, he said.

“Those human beings who live in deprivation and misery will be easily exploited by terrorist organizations, if this situation persists,” Cardinal Rai warned.

The cardinal called for U.N. Security Council resolutions and bilateral agreements to resolve the Israeli-Palestinian conflict “by creating a Palestinian state alongside and in good standing with the State of Israel, and the return of refugees.” He also said Israeli troops should be withdrawn “from occupied territories in Palestine, Lebanon and Syria.”

“Indeed, the full implementation of international law and Security Council resolutions is the only way forward to stabilize our region and prevent overflow,” he said.

“It is clear that the origin of conflicts and wars that shook the region is the conflict between Saudi Arabia and Iran,” Cardinal Rai said, adding that “it is known” that each of these two regional powers “is supported by its own allies (in the) East and West.”

“We in Lebanon suffer the consequences of this conflict,” he said.

Lebanon has not had a president since former President Michel Sleiman ended his term in May 2014. The cardinal, citing the political conflict between Sunnis and Shiites, said the government and public institutions remained paralyzed due to the presidential vacuum and “anarchy at all levels.”

NEXT: Russia’s Catholic, Orthodox to rebuild church buildings in Syria