New U.S. nuncio worked in Mexico during a difficult period 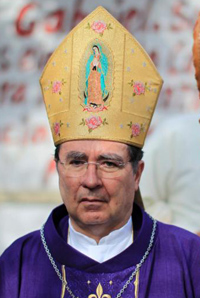 MEXICO CITY (CNS) — Archbishop Christophe Pierre represented the Vatican in Mexico for nearly a decade, a time defined by a drug war, a delicate period of domestic politics and the election of a pope whose pastoral approach and church vision appears at odds with many in the Mexican Catholic hierarchy.

Archbishop Pierre won an important reform for the church on religious liberty, which moved Mexico further away from its anti-clerical past. He became known for working behind the scenes and acting discreetly in a country where church and state were estranged until 1992.

“He had to navigate a very difficult political environment,” said Pablo Mijangos Gonzalez, a historian at the Center for Research and Teaching in Economics in Mexico City. “He was a very diplomatic nuncio, who did not create unnecessary antagonisms for the Catholic Church and avoided distractions and media scandals.”

Mijangos Gonzalez added that Archbishop Pierre “was one of the various ecclesiastical actors involved in the (religious freedom) reform” and will likely assume a similar role in the United States.

Archbishop Pierre, 70, brings a low-key approach to the United States, where issues such as a religious freedom are priorities for Catholics. He must work with bishops believed to be not entirely on board with the pope’s plans for the church — something he struggled with in Mexico.

Earlier this year, the country’s most senior Catholic leader, Mexico City Cardinal Norberto Rivera, allowed an editorial in an archdiocesan to publicly pose the question, “Who gave the pope bad advice?” It alluded to the February papal tour, in which Pope Francis told Mexican bishops to “stop resting on their laurels” and start speaking out on social issues and vices such as drug violence, which has claimed more than 100,000 lives since late 2006.

Pope Francis also called for increased closeness between Mexican and U.S. bishops’ conferences — an issue Archbishop Pierre is in a position to address, though some observers see him as one of the bishops being admonished by the pope in the speech.

“The pope’s message at the cathedral had the nuncio as some sort of ghost addressee,” said Rodolfo Soriano Nunez, a Catholic sociologist, who saw the nuncio’s continued presence as untenable in the aftermath of the Archdiocese of Mexico City editorial. “He has been here for more than eight years.”

Additionally, Nunez said the nuncio acted somewhat slowly in cases of sexual abuse by priests and removing bishops who responded improperly to such allegations. He also did not arrange meetings with victims during visits by Popes Benedict XVI and Francis.

Archbishop Pierre was appointed apostolic nuncio in 2007 during the early days of the country’s crackdown on drug cartels and organized crime. He leaves as Mexico returns to an authoritarian-style of politics common during the days of one-party rule, when the church was unable to speak out on social and political issues and was expected to fall into line behind the government.

In perhaps his most media-covered act, he celebrated Mass in 2014 at the Ayotzinapa teacher training school for the families of the 43 missing and presumably murdered students — whose case has not been championed by the church and has caused grief for the image-conscious Mexican government, which has tried to discredit outside experts reviewing the oft-questioned official investigation.

The next nuncio “needs to be very cautious about his relationship with the current government,” Nunez said.

“(The nuncio) also needs to have some weight of his own in Rome to be perceived not only as the representative of the pope, but also as being close to him,” Nunez added. “The Mexican bishops have become used to jumping on a plane to do their own dealings at the Curia.”

PREVIOUS: Pope’s visit to Greece comes at time of fear, uncertainty for refugees