Pope’s visit to Greece comes at time of fear, uncertainty for refugees 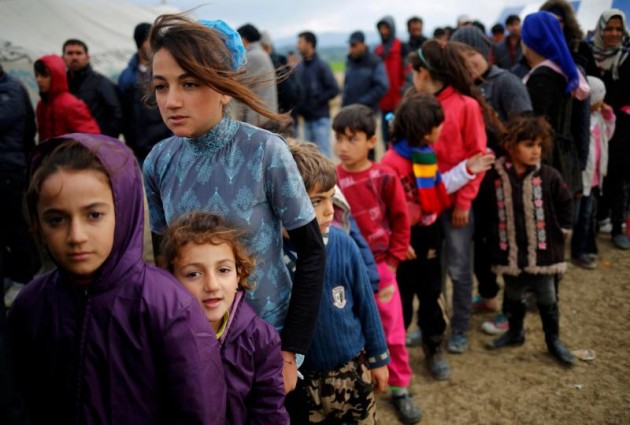 Young refugees wait in line for tea at a makeshift camp April 11 at the Greek-Macedonian border near the village of Idomeni, Greece. Pope Francis will travel to Lesbos, Greece, April 16. (CNS photo/Stoyan Nenov, Reuters)

VATICAN CITY (CNS) — Pope Francis’ trip to Lesbos, Greece, April 16 comes at a frightening and critical time for tens of thousands of refugees and migrants waiting and wondering where they will end up, said members of Catholic aid agencies.

Maristella Tsamatropoulou, spokeswoman for Caritas Hellas, the Catholic charity in Greece, said when rumors started swirling that Pope Francis would join Ecumenical Patriarch Bartholomew of Constantinople on a visit to refugees, “we believed it immediately because our pope is spontaneous; he’s a force of nature.”

Last October, when several thousand refugees from Syria, Iraq, Afghanistan and other countries were passing through Greece on their way to other parts of Europe, Caritas Hellas had five paid employees. Now the number of refugees and migrants has grown and the borders with other European countries have been closed to them. In response, the paid staff at the Caritas central office in Athens has grown to 15 people and there are 40 other employees around the country, including in Lesbos.

Among the migrants and refugees, Tsamatropoulou said, “the terror is immense.” The northern border with Macedonia closed in February, and the European Union and Turkey signed an agreement to forcibly return to Turkey those not applying for asylum in Greece. The agreement went into effect March 20.

What was a transit center in Idomeni, on the border with Macedonia, has become a muddy encampment of more than 11,000 people hoping and praying the border will open. The Caritas spokeswoman said the Greek government keeps saying it will close the Idomeni camp, “and we fear it won’t be peaceful.”

Already impatient refugees, stuck on a field never meant to serve as a camp, occasionally try to force guards on both sides to let them pass into Macedonia. They are pushed back, including by the use of water cannons or tear gas.

Tsamatropoulou said staff from Caritas and the other aid agencies continue trying to convince the people at Idomeni to go to one of the smaller, organized refugee centers set up by the Greek government. Conditions are better there, she said; at least there are hot meals. But the migrants and refugees at Idomeni can see the border and are certain that it will open eventually. They want to be the first ones across.

The scene in Lesbos had changed dramatically as well, she said. Prior to March 20, when the Turkey-EU agreement went into effect, the migrants and refugees were more or less free to come and go. Now, many of them are in what amounts to detention centers.

Jesuit Refugee Service, which also operates in Lesbos and other parts of Greece, issued a statement April 12 saying Pope Francis’ visit “could not come at a more critical time.” JRS believes the Turkey-EU agreement “violates the international law and the principle of ‘non-refoulement’ or not pushing back people in need of protection.”

More than 150,000 refugees and migrants have arrived to Greece so far in 2016, JRS said, and more than half of them reached the country by arriving in Lesbos. In addition, “the U.N. refugee agency has announced more than 22,000 unaccompanied minors are stuck in Greece and facing an uncertain future of possible violence and exploitation,” the statement added.

“During a time when pushbacks are seemingly the solution being put forward by the EU, we hope the pope’s visit is not just a symbol of hope for refugees, but a concrete push for the Greek government and other European states to actualize those hopes,” said Jesuit Father Thomas H. Smolich, JRS international director.

NEXT: New U.S. nuncio worked in Mexico during a difficult period