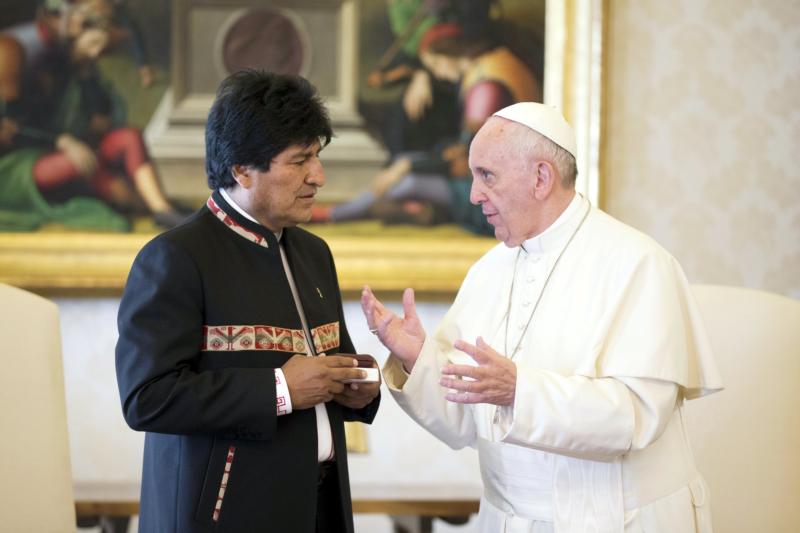 Morales met the pope April 15 before attending a two-day conference dedicated to St. John Paul II’s 1991 social encyclical “Centesimus Annus.” The meeting was jointly sponsored by the Pontifical Academy of Social Sciences and the Institute for Advanced Catholic Studies.

Upon his arrival, the president embraced the pope saying in Spanish: “What a joy to see you, brother pope. I am very happy.”

According to the Vatican, the two privately discussed “relations between church and state, evoking Bolivia’s long Christian tradition and the decisive contribution of the church to the life of the nation.”

“Reference was also made to questions of common interest, such as education, healthcare and assistance to the poor. Attention then turned to various international situations,” the Vatican said.

After introducing members of his entourage, Morales gave the pope two gifts: a three-book set on the health benefits of coca tea and a wooden bust of Tupac Katari, the 18th-century leader of the Bolivian indigenous rebellion against the Spanish empire.

The pope remained silent as Morales explained the benefits of coca leaves. “I am taking them every day,” he said.

For his part, the pope gave the Bolivian president a large medallion of St. Martin of Tours giving his cloak to a poor person. He also handed him a copy of his recently published apostolic exhortation on the family, “Amoris Laetitia.”

PREVIOUS: Humility is the path to a softened heart, pope says at morning Mass